We have met and interviewed the prominent German peace activist Jürgen Grässlin during the Conference about Utopia at the Monastero del Bene Comune in Sezano (Verona), Italy.

Grässlin, an arms trade expert who has already collaborated with Pressenza during the 2016 Deutsche Welle Global Media Forum and the last International Peace Bureau Congress, reminds us about the necessity of peace. In his opinion we all must achieve a world without arms, military and violence step by step, starting by forming a network of all people who are working for a better future.

We have also talked about Grässlin’s researches on German and European arms export, a huge business that causes millions of victims all over the world. Germany, Italy, USA and Russia are the main countries involved in arms trade, which too often goes beyond the limits of the International Conventions.

Jürgen Grässlin and the anti-war campaign Aktion Aufschrei (‘Action Outcry’) are engaged in denouncing this kind of crimes by bringing to Germany the voice of the victims and by realizing nonviolent actions against the aggressors, i. e. arms companies and political institutions which support them.

A recent TNS Enmid survey (february 2016) has revealed that about 83% of the Germans are against arms export, and probably the same opinion is shared by the majority of people, in Europe and beyond. It is time to unite all these people – Grässlin says, and work together to realize the utopia of peace. 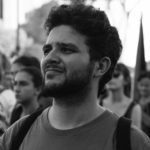