The great relevance of the workshop Arms industry and Ethics: How to enforce ethics in a highly profitable business, hosted by Pressenza at the Global Media Forum organised by Deutsche Welle in Bonn, was apparent by looking at the day’s news: NATO manoeuvres in Eastern Europe, pictures of children with machine guns at a PR event in a campaign by the German army, and news from anti-war groups like the Stockholm International Peace Research Institute (SIPRI). It is notable that Germany, the host nation of this event, is once again in third place in the league table of the world’s arms-exporting nations. The situation clearly reflects what was talked about in the workshop.

The depressing impression that stayed with us after the workshop was that we are in the middle of a militarisation campaign that encompasses the whole world. The panel speakers from Germany, Egypt, the USA and the Czech Republic enlightened us on the same phenomenon from different angles; the production and movement of weapons is increasing and becoming more visible. Everywhere the population is becoming attuned to the presence of the military and the normality of seeing weapons in public. Growing nationalism and images of enemies, as presented by politicians and the media, feed feelings of fear and hate that give legitimacy to this militarisation. “When I studied the facts, I thought, ‘oh my god, how are we gonna stop this?’ It is all just a big business. It has nothing to do with ethics,” said David Andersson who talked about the USA’s arms trade. The audience reacted with shock as for many of them these revelations are totally new.

Jürgen Grässlin, the decade-long activist against the German arms industry, showed us to what extent Germany delivers weapons to war zones and to countries beset by civil war: tanks to Saudi Arabia, submarines to Israel, warships to Algeria and machine guns to Mexico.

But the next speaker, Baher Kamal, pointedly showed us that Germany, while being a big exporter, is far from being the only country that preferentially exports to Middle Eastern countries. “Nobel prize winner, Barack Obama, has overseen weapons deals with Saudi Arabia worth 5 to 10 billion US$,” he informed us. Egypt was given grants of 100 to 250 billion US$ for obtaining weapons from US arms supplying companies. “Egypt [speaking of its people] does not see any of this money. The military goes shopping in the USA and the US administration pays.” The people in the Middle East – 400 million living in 22 dictatorships, “democratic dictatorships,” as Kamal said with a grim smile – are fearful and helpless: “We must buy weapons because otherwise our neighbours will come and kill us,” they fear.

Grässlin was able to report some positive developments. With the campaign Action Outcry – Stop weapon exports! carried out by 100 organisations, and through the prosecution of members of Heckler&Koch – because of the export of machine guns to human-rights-violating provinces of Mexico – the media became interested in this neglected topic. The general population was appalled: “80% of the German population, according to surveys, are against any export of weapons.”

Kamal on the other hand told us that the media in the Middle East plays no independent role and 78% of the news originates from international press agencies like the BBC, Reuters, Agence France-Presse (AFP). “We are stuck in this situation. There seems no hope. Here in Germany, you [Grässlin] say that you are 100 organisations. But what about the UK, the USA, or Norway, who are also selling weapons to the Middle East?”

Grässlin plans to internationalise that campaign. Most of all he is interested in the documenting of victims of German weapons. “What would happen, if the victims claimed for the costs of their hospitalisation and health care?”

This is also the direction that David Andersson proposed: “This business must become unprofitable. Otherwise it will not stop.” This was seen as a real challenge when looking at the unimagineable amounts that are moved by the US military, as Andersson showed in his presentation.

Militarisation of Czech Republic – “It feels like being at war” 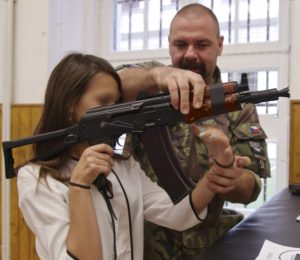 Dana Feminová from the Czech Republic reported how transient a success against the military can be. The USA wanted to build a radar and missile base in Eastern Europe, supposedly for the protection of Europe against missiles from Iran. The Czech people successfully resisted such a base in 2009 with mass protests. But their happiness was short lived. Meanwhile, the USA has built a base in Romania. And Feminová showed new pictures of US tanks crossing the Czech Republic waving their US flags – as a propaganda campaign for the Czechs and as a demonstration of power against Russia. Additionally, the Czech army goes around primary schools and lets children handle guns. “It feels like being at war,” Feminová said describing the emotional climate in her country.

Despite providing only a few solutions, the panel discussion showed that activists everywhere are connecting more and more. In October this year there will be a World Peace Congress in Berlin, where Pressenza will reproduce this workshop and talk again and in more detail about what can be done to stop arms manufacturing and their export and further militarisation.