Where does this article come from?

I’d like to explain that this article is an editorial about the violent situation that Europe is experiencing at the moment with a particular and intentional perspective of wanting to understand from a humanising perspective.

It’s a reflexion using as a basis the principle that says: “It does not matter in which faction events have placed you. What matters is that you comprehend that you have not chosen any faction.” (Silo’s Message, chapter XIII)

This is one of a series of principles that are found in the book “Silo’s Message” that I use for meditation about my own life and the events around me.  They are like laws of life, light and evolution that, when one reflects on them, help in the search for personal coherence.

Just like the majority of people, I vehemently condemn any act of violence; nevertheless, I think that to advance a bit more would be to try to comprehend the roots of these events and, with a less judgemental and accusing mentality, to reflect about what we can in do in front of such situations that we have to live through.

What I perceive of the current global social situation

I have seen in several places that social situations are getting difficult.  In Europe, there continues to be a climate of economic, political and social crisis.  Unrest and disorientation in general are on the increase, without people knowing how to react in front of such acts of violence or in what to believe under such a bombardment of information.  This generates a great deal of fear, insecurity regarding one’s own life (with the terrorist attacks), but also with respect to the future that has become totally uncertain.

In the Middle East we have an even more chaotic situation with political-military conflicts, the emigration of masses, and social and religious problems increasingly present.  In Africa, the situation continues to be the same and, sometimes, even worse due to poverty, inhuman living conditions, precarious democracies, authoritarian governments, etc.

In Latin America, after an apparent advance with progressive governments, today we are experiencing a climate of middle-class coups allied to aggressive media manipulating information and a corrupt judicial system.

In all these chaotic places and situations we still feel the presence of the invisible hand of big business and the financial system that try to impose their policies of speculative manipulation and concentration of political power for their own benefits.

What is certain is that everywhere I feel the same climate of insecurity and uncertainty in people in front of their personal future and the search for alternatives for a better life.  All of this situation makes me reflect on what would be the best way to act.

What it means to understand 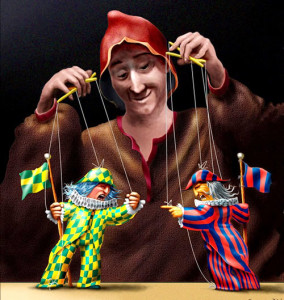 Within this global chaos, what does it mean to understand that we haven’t chosen any side; not me, not the direct victims of today’s violence, nor the apparently worse perpetrators of violent terrorism.  To think like that can even seem inconceivable, but it requires a will to overcome the compulsive judgemental thinking that we are used to.  So, let’s try it.

We were born in a place we didn’t choose, be it our geographical country, our culture, our parents and family.  This culture influences our way of thinking and seeing the world; we are, basically, influenced by the family surroundings in which we were born, in which we grew up, the schools where we studied, the friends we had, and, finally it turns out that the most intimate decisions that seem to be “ours” are the result of a set of social and personal influences.  Try to see this in your own life.

Now we can try another exercise which is perhaps more difficult…

Within this social moment and climate that exists in Europe of rejection, exploitation, exclusion, abandonment and humiliation of immigrants and refugees, in addition to the wars that European governments are pushing in the name of democracy and justice, let’s imagine the life of that person who decided to explode a bomb in the name of their god or an ideal that seemed to be worth more than life itself.  In what conditions was that person born?  What was their life like?  What disappointments and failures, personal and existential, could that poor individual have suffered, that – in desperation at not finding ways out or answers to their problems – could have been manipulated or made to believe that violence and killing others would drown their pain and find recompense in other future lives?

This perspective helps us to have a humanising look at the skin of monstrosity.  It’s not a look to justify any violent situation, or to exonerate or indemnify any of their actions – for that we would need improved social justice – but rather an attempt to understand and also to observe the greater historical context in which we live and what we do.

Is it possible that, just like that poor and desperate person who ended their life and took the lives of others, who lost faith in life and in the world, that also we have chosen very little of what we are?

In this historical context, what are we doing?  Or what am I doing?

This position can help us to reconcile with a historical moment or a greater context in which we have to live.  We haven’t chosen to be born in this moment of human history, but there’s a reason we are here today.  We haven’t chose to live and to witness so much human suffering, but we can do something given that we are sensitive to such injustice.

With a broader perspective and understanding of the process of humanity and our own lives, and bearing in mind that we are still evolving as humanity, it is the responsibility of each one of us to plant a seed in this evolutionary process.

To seek to be in peace with oneself in relation to one’s own life and external events, to contribute to this evolutionary construction and to fight for better conditions for all and therefore for what we believe, that’s what we need to do: look for meaning in life and the joy of living.