Several media outlets have echoed in recent days how well the Spanish government had sold its culture to the NATO summit leaders and their companions in Madrid. The frivolity with which the events were broadcast was such that they seemed more like guests at Fitur[1] or Arco[2]. Tourist strolls around the city, a visit to the Reina Sofia museum, dinner at the Prado to showcase the delights of Spanish gastronomy, of course substituting the “ensaladilla rusa” for the “ensaladilla tradicional”.

Cynicism and cultural manipulation taken to its peak.

We don’t know if before dinner they will have looked at Goya’s engravings The Disasters of War, made between 1810 and 1815, where the horror of war is shown particularly crude and penetrating, with its dead and its murderers.

But the last straw came from the “companion of the monarch” who had no qualms about posing with “the companions of the leaders” in front of Picasso’s Guernica! That painting, a reference for many pacifists and republicans, which Picasso painted at the request of the government of the Second Spanish Republic to be exhibited in the Spanish pavilion during the International Exhibition of 1937 in Paris! Yes! That painting, which is another denunciation of the horrors of war, which the painter had assured himself before his death in 1973, would not be “returned” to Spain until afterwards the end of the fascist regime of Francisco Franco and the return of democracy… Would it be the democracy of “NATO, NO” of the PSOE of the 80s?

How dare they appropriate the cultural references of peace and the denunciation of wars, those who have just bet on the increase of the arms budget and the sending of troops, which could lead us to total war! (See the article by Olga Rodríguez Sobre la militarización de las mentes. Biden’s announcement of sending more troops to Europe and the definition of China as a “challenge” to NATO’s “interests and values” do not herald more peace, but rather a prelude to more tension. https://www.eldiario.es/opinion/zona-critica/riesgos-cumbre-otan_129_9130663.html)

Is it to distract people from the facts? Because, since its creation on 4 April 1949, NATO has carried out military interventions and promoted invasions around the world to promote changes of governments and destabilising actions; among others Kosovo (1999), Afghanistan (2001), Iraq (2003), Libya (2011), deploying itself as the international armed wing of the US and its Western allies. Today it is clearly designating Russia and China as threats.

Could it be in order to leave aside Sánchez’s turn to Morocco, where he left the Melilla issue “well resolved” with a few deaths, the fact that Macron is opening the doors to the extreme right and that Orban in passing is charging the rights of the Kurds with the stroke of a pen?

The right-wing daily El Español dared to headline: The spirit of the Prado: 40 rulers with Erdogan, Orbán and only 5 women united for democracy!

But other winds are blowing

While some are betting on rearmament to the detriment of their own populations, because that means less investment in health and education, others are betting on another way. A few days earlier, in Vienna, with almost no media coverage, representatives from 65 countries that are signatories to the Nuclear Weapons Ban Treaty met in a friendly and cooperative atmosphere thanks to the ICAN campaign that is making progress (cf. https://www.pressenza.com/es/2022/06/crecen-las-esperanzas-para-la-humanidad-en-viena-65-paises-dicen-no-a-las-armas-atomicas-en-la-declaracion-del-tpnw/).

At other levels, various collectives are working for a culture of peace, making humble and heartfelt human symbols of peace, workshops on reconciliation, peace and nonviolence marches, etc. Attempts which may seem like small grains of sand but which are showing a profound aspiration of the human being.

Of course, this committed stance must be vindicated with acts of nonviolent rebellion in which culture and art can play an important role; we already have the exemplary response of the artist Daniela Ortiz, who has just asked the Reina Sofía Museum to withdraw her work for hosting a NATO event “with Guernica in the background”.

It is urgent to converge on this, to bring together all those who are sensitive to this issue in order to open the way towards peace, nonviolence and humanisation.

Martine SICARD, Visual artist, member of World Without Wars and Without Violence
Author of the illustrated book “A Path to Peace and Nonviolence”, published by Saure. 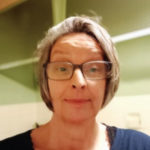