Several governments across Europe promised, or even gave, ‘danger money’ bonuses for frontline workers in health and social care as the pandemic gathered strength. Such bonuses can only treat the symptom not the cause, however. Bonuses and even higher wages come nowhere near addressing the fundamental concerns of care workers that go well beyond remuneration. If longstanding non-remuneration issues in the care sector – insufficient funding, marketisation and privatisation, the brain drain and understaffing – remain unsolved, then fresh labour unrest in the care sector in post-pandemic Europe is scarcely avoidable. An analysis of the dynamics and patterns of unrest in health and social care prior to Covid-19 makes this clear.

First, labour unrest in the sector isn’t new. This might be surprising as care work is generally considered a ‘labour of love’: it is expected that workers find the work they do rewarding in itself. Moreover, the loyalty of care workers towards individual care recipients and their professional ethics might make it morally difficult to turn to industrial action. If care activities are recognised as ‘work’ and not as a ‘moral obligation’, however, then alliance-building between workers and care recipients and their relatives can be fostered. General empathy for the dedication of care workers also provides the prospect of the mobilisation of public support and coalition-building with community and progressive movements.

Second, strike actions in health and social care are characterised by their infrequent but ‘eruptive’ nature. In general, strike activity in the sector largely follows the overall pattern for the country: generally higher where strike levels are above average but more muted in ‘strike drought’ countries. Amongst the latter, however, industrial action in health and social care is (alongside education) cracking labour quiescence, becoming almost a synonym for trade union protest action.

Third, the repertoire for collective action by health and care workers is significantly diverse, going beyond forms such as strikes and work-to-rules. The repertoire includes non-strike forms of unrest such as demonstrations, symbolic protests and mass resignation campaigns. Reasons for this diversity are two-fold. There is the ‘moral dilemma’ mentioned above, with workers aiming for forms of unrest that have as little impact on care recipients as possible. In addition, rules on industrial action in health and social care are pretty strict, with care work being regarded as ‘essential’ in most countries so that an emergency service can be guaranteed. 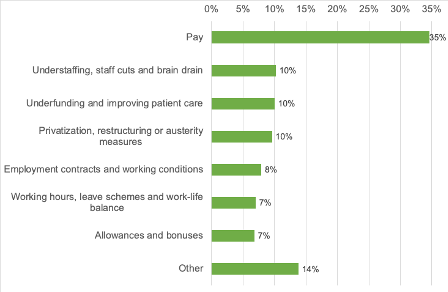 Source: own elaboration based upon the ETUI Collective Bargaining Newsletter, February 2008-April 2021.

Fourth, Figure 1 demonstrates that the claims of health and care workers are multi-faceted. Several issues like underfunding, understaffing and stress are either rooted in the marketisation of the sector or in the austerity policies that governments have (unilaterally) taken in the aftermath of the finance-led crisis in capitalism. Furthermore, as several professions in care are predominantly carried out by women, this not only adds to the ‘feminisation’ of industrial action but is also reflected in the agenda since the gender pay gap remains a concern. Workers’ complaints are not limited only to pay – but pay is still a source of grievance.

Labour unrest during the pandemic

The Covid-19 pandemic has seen some temporary restrictions on the right to strike for ‘essential workers’ in countries such as Portugal and Romania. The ‘moral dilemma’ of care workers has become particularly compelling during the pandemic with their professional accountability towards society and public health protection at stake. Labour unrest seems to have been relatively dampened in countries in central and eastern Europe. Yet, overall, the pandemic has generally not been a harbinger of labour quiescence: strike actions or the threat of them have continued, and demonstrations and rallies have taken place in several countries, even if their relative importance may have decreased somewhat.

The opposite, however, applies to campaigns and symbolic forms of protest. The launch of social media-focused campaigns with videos or beaming photos of care workers, or similar photos and slogans otherwise projected on key buildings in the public space, might be seen as having a minor, but nevertheless innovative, influence on the action repertoire.

A partial shift in the issue agenda

Being in the eye of the Covid-19 storm, care workers’ issue agenda has partly shifted although only temporarily. While the pandemic has exposed workers’ long-existing claims, their broader framing stood less prominently at the start of the outbreak. Immediate concerns related to employment terms and conditions have in the meantime come strongly to the fore. Unsurprisingly, this applies in particular to health and safety issues such as the lack of personal protective equipment and the need for psychological support in respect of mental well-being. Long working hours have highlighted high staff turnover and enduring staff shortages, while increased workload has been associated with non-standard employment contracts and the diluting of policies on (sick) leave and work-life balance, on top of core working conditions that define ‘precarious’.

The responses by employer associations in the sector or by governments have been uneven. In several countries, bargaining rounds in private or public care have resulted in collective agreements setting increased pay levels and better working conditions. Albeit to different degrees, some governments have swiftly agreed, or promised, additional funding to improve pay and working conditions or to hire more staff. Above all, however, governments have turned to paying one-off Covid-19 bonuses in recognition of the ‘unique efforts’ of care workers during the pandemic. Yet, even though governments are fulfilling one immediate demand, bonuses are no more than a cosmetic gesture: they do not address entrenched grievances and claims. Further: bonuses that leave a bittersweet taste can only have a demotivating impact in the short run.

Health and social care workers at the forefront of upcoming labour unrest?

The pandemic has opened up political opportunities, in terms of budgetary capacity, for trade union demands in health and social care. It remains to be seen, however, whether this will imply a historical turning point in the organisation and delivery of care and its growing neoliberal underpinning. Will today’s interventionist governments also refrain from rampant marketisation and privatisation, returning once more to a public non-profit care service? In several instances, (the threat of) strike action or other forms of labour unrest have been necessary to put, or retain, the pressure on governments. This will not change in a post-pandemic world coping with ‘Long Covid’. Industrial action by organised care workers might set the example for other (‘essential’ or ‘frontline’) workers outside care in upcoming struggles, further de-legitimising the neoliberal discourse. Much depends, however, on the presence and dynamism of an imaginative, forward-thinking and responsive trade union leadership able to connect labour unrest in health and social care with other struggles in and beyond the workplace.