This post is also available in: German, Portuguese, Greek

Fly me to the moon, but don’t put reactors there

Not content to desecrate our terrestrial landscape with hundreds of thousands of tons of nuclear waste — much piled up with nowhere to go, the rest released to contaminate our air, water and soil — humankind, in all its folly, now plans to do the same to the Moon. And, eventually to Mars.

While our species’ insatiable scientific curiosity has undoubtedly led to some beneficial inventions, it has also drawn us inexorably towards our own downfall. Our zeal to create the atomic bomb ignored logic, ethics, consequences and the fundamentals of human rights.

The bomb brought us so-called civil nuclear power reactors, the ugly and irresponsible spawn of a weapon that leaves us perched perpetually on the precipice of extinction. But there is nothing “civil” about nuclear power.

At the dawn of the nuclear energy age, not a thought was given to the legacy of deadly radioactive waste it would produce. That can was kicked summarily down the road. Now we are far down that road and no solution has been arrived at, while we ignore the one obvious one: stop making more of it!

So now comes the news that the US wants to put nuclear power reactors on the Moon.

In the news stories that followed the announcement, replete with the usual excitement about space exploration (never mind the cost and bellicose implications) there was not one single mention of the radioactive waste these reactors would produce.

The problem, like the waste itself, will simply be kicked into some invisible crater on the dark side of the Moon. 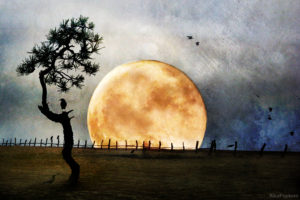 Should the Moon be for magic, or become our newest nuclear wasteland? / Alice Popkorn/Creative Commons

NASA, the US Department of Energy and assorted nuclear labs are pushing the small modular reactor for nuclear projects on the Moon and Mars. Desperate to stay relevant and to continue gobbling up taxpayer dollars, this is music to the failing nuclear industry’s ears. Financially disastrous and technically unresolved on Earth, the SMR, say these “experts”, is ideally suited to the needs of humans living for extensive periods in space.

Since each of these mini-reactors will likely have an uninterrupted output of only 10 kilowatts, it will take multiple reactors on the Moon or Mars to fulfill the necessary functions for their human inhabitants.

Needless to say, so far there is no certified design, no test reactor, no actual reactor, and no fool-proof way to send such a reactor to the Moon. (Rockets have an unfortunate habit of sometimes blowing up on — or shortly after — launch.) Nevertheless, the year 2026 is the ambitious target date for all systems go. In keeping with the theme, “pie in the sky” springs to mind.

While no reactor design has been identified, it will most likely need to use highly enriched uranium (HEU) which puts the reactor firmly in violation of non-proliferation standards. As Dr. Edwin Lyman of the Union of Concerned Scientists told PBS Newshour, “This may drive or start an international space race to build and deploy new types of reactors requiring highly enriched uranium.”

Given the utility of HEU for nuclear weapons use, and the probes currently being sent to the Moon and Mars by “unfriendly” countries such as China and the United Arab Emirates, it does not take much of an imagination to envisage the temptation for theft by force. Will the US deploy guards around its lunar reactors.? Will we see terrorism on the Moon, even war?

What is this really all about? Profit? Prestige? Proliferation? The Idaho National Laboratory, which is eager to develop the lunar SMR prototype, sees this as an opportunity to emphasize “the United States’ global leadership in nuclear innovation,” the lab’s John Wagner told Newshour.

This echoes the mantra parroted by almost every federal institution and corporation seeking to justify some new and exorbitant nuclear expense: we cannot let China and Russia take over; the US must retain — or regain — pre-eminence in the nuclear sector and in space. And so on. 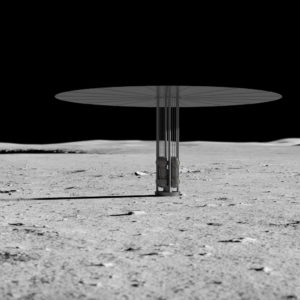 It’s not being cute to call this lunacy. With the ever-expanding crises on Earth, caused by the ravaging effects of climate change as well as the current pandemic, spending exorbitant sums to stick reactors on the Moon or Mars is more than madness; it is morally irresponsible. It abandons most of us on Earth to our fate, while, just maybe, possibly, someday, a handful of people will head off to the Red Planet. Never to return.

Yet undeterred by immorality and expense, and apparently without the slightest concern for the radioactive dirt pile these reactors will produce, NASA and the Department of Energy are eagerly soliciting proposals.

And what will these lunar reactors do? They will enable “capability for a sustained lunar presence, particularly for surviving a lunar night,” NASA’s Anthony Calomino told Space News.  “The surface of the moon provides us an opportunity to fabricate, test and flight qualify a space fission system,” he said.

The Moon is seen as our launchpad to Mars. Now, it seems, it will also become our latest nuclear dustbin. If there is a meltdown, or a cascade of accidents among the cluster of small identical reactors there, all of which could suffer the same failure at the same time, it will become our next nuclear wasteland.

Beyond Nuclear International
We created Beyond Nuclear International in order to put the human face on our issue, and to tell the stories of the anti-nuclear struggle in a different way, with a focus on the humanitarian impacts of nuclear power and nuclear weapons. Through this more creative, visual and personalized approach, BNI aims to engage new audiences who care about global warming, animals, our environment, peace and the future of our planet, and to bring the world’s anti-nuclear movement together. beyondnuclearinternational.org