On 1 June, a large demonstration took place in the centre of Amsterdam in solidarity with demonstrators protesting in dozens of cities in the United States against the death of George Floyd at the hands of a police officer.

In Amsterdam, a large demonstration took place on June 1st from 5 pm, in protest and solidarity with the death of the Black American George Floyd (46 years old) in Minneapolis, at the hands of a policeman. It was called by the collective Kick Out Zwarte Piet, in collaboration with Black Queer & Trans Resistance NL. We can see a moment of it in this publication by our colleagues from @continentsycontenidos.

A post shared by Continentes y Contenidos (@continentesycontenidos) on Jun 1, 2020 at 2:40pm PDT

According to organizers, Floyd’s death “is reminiscent of similar events on his own soil, such as the one of #MitchHenriquez who was smothered by officers during his arrest in The Hague five years ago.

The demonstration has been quiet, but many of us wonder if such a massive gathering in Covid-19’s time is a good idea, even though most of the protesters have worn masks, as requested by the organization.

On the other hand, while Members of Parliament were expressing their indignation, Mayor Halsema saw no reason to intervene. “Freedom of demonstration is a great good in Amsterdam,” said her spokesperson. 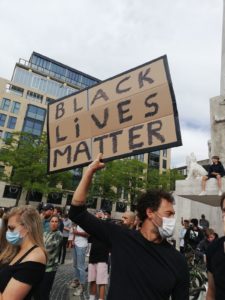 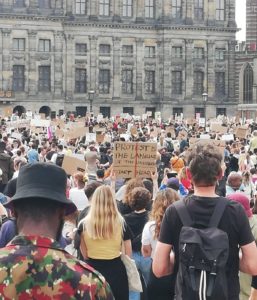 The mayor of Amsterdam, Femke Halsema, in a statement to Het Parool through a spokesperson, said that, “despite the crowds gathering on the Square, the municipal government has no intention of intervening to ensure the distance of one and a half meters between people… the organization of the demonstration is responsible for ensuring the distance. The participants also have their own responsibility”. The police were present at the back of the square and reminded people of the rules to keep in mind with the coronavirus.

The attitude of the municipality is surprising because in recent weeks several interventions have been made in parks and public places to separate large groups of people. “There is no reason to end the demonstration here,” insists the City Council. The freedom to demonstrate is a great advantage in Amsterdam.

Translated from spanish by Lutlith Van