I left Santiago with the memory of the most beautiful closing event that I have ever lived… and considering that in my life as a university professor, writer and lecturer there were many such events, not to mention those that I myself organised: “Building Convergence” was the title of the IV Humanist Forum held in May 2019, and the participative artistic show that closed the event showed with grace, intelligence and emotion, a great part of the convergence built -within the spirit stimulated by Silo- to connect mind, body and heart.

I came to Chile at the invitation of Alicia Blanco from Argentina and Ricardo Arias from France-Colombia, to learn more about the Humanist Movement and to create convergence with the international network Dialogues in Humanity of which I am a part, and which also values the connection between personal transformation and the construction of a better world. The ﬁnal scene of the colourful synthesis tapes produced by the 24 networks that worked during the event, coming down from a high post and intertwined by the circular dance of their spokespersons around that pillar, was very symbolic as well as beautiful. The vision of co-constructed syntheses woven with syntheses of other networks to the rhythm of a dance of the native Chilean peoples, was a very original and expressive moment of the Forum. I was ecstatic and saw that I was not alone in my admiration. The humanists that surrounded me, many more than a hundred, had expressions of joy and emotion when they saw the scene. They still kept on their faces the commotion inspired by the Latin American songs that they had sung together just before and that celebrated the union of the continent. As a Brazilian, I saw myself a little out of that moment because, unfortunately, I didn’t recognise the songs sung in Spanish and I thought: the Portuguese-speaking part of this America needs to be more integrated with the rest of the continent, because we share similar joys and sorrows and much of the contribution we make to the world is common.

Throughout the entire event, I attentively observed the smiles and the exchange of warm embraces among the participants, who had known each other for a long time. As in the Dialogues network, it seems that what we call “friendship politics” is also practiced by the siloists, that is: to celebrate the joy of being together and to transform the complicity and sincerity of friends into a political force for joint action. I felt personally integrated by this policy of friendship, because I was treated with warmth and affection by the people with whom I shared moments both in the official sessions of the event, and in moments created by shared personal wishes – such as the visit to La Sebastiana, the inspiring home of Pablo Neruda, in Valparaíso. The mention of this city leads me to comment on the political moments of the Forum: the visit to the National Congress of Chile and the deputies of the Humanist Party, and the search for convergence among parliamentarians from different countries of the Southern Cone, which took place in the auditorium of the moving Museum of Memory in Santiago. what courage and audacity of humanists to create a party, and seek to intervene directly in current politics, through the election of their own representatives! The enthusiasm of the visitors to the Parliament, the comments of admiration and the serious attention paid to the speeches of the political representation in the Forum, show that the decision is not the object of important divisions within the movement. I do not believe that this is possible in the environment of the Dialogues in Humanity network… but we have little life time in front of the 50 years of the Humanist Movement. The multitude of this movement, its presence in so many countries, its anchorage in the Earth through its dozens of parks, its ramifications in so many areas of interest to humanity, its own press -Pressenza- published in eight languages, the projects carried out and so many others planned in this Forum, leave me astonished. I am particularly committed to inviting “dialogueists” to participate in the 2nd World March for Peace and Nonviolence between 2019 and 2020, an admirable event that, after ten years, repeats its first edition, celebrated with praise.

When I arrived at the Forum, I had a question in my head: who was this Silo, capable of attracting so many people, of being heard in so many different cultures, of maintaining for so many decades the loyalty of those who were attracted by his message? To have read “The Day of the Winged Lion,” to have walked through his web interviews and shared the admiration of his followers for his intelligence and contagious smile did not answer the question. After talking to many people in Santiago, I think one clue that comes up is the famous “disciplines,” the four different ways to seek to be a master of yourself and to help others, as trained masters, to have more clarity of their mission in this life, to expand their consciousness and to be more humane. I did not witness any exchange on this topic in the Forum sessions, and the fundamentals of the disciplines do not easily appear on the movement’s website. Alicia and others introduced me to the topic, telling me about their experience. Both in the sixties and seventies and today – perhaps even more – the inner search is an indelible experience. The fact that Silo – el Negro – guided the humanists in this quest, that they entered that journey with a safe guide and with mutual company, probably has much to do with the permanence of Silo’s message and the friendship that unites the people of the movement. Another clue is the slogan of New Humanism which also summarises, in a way, its objectives: Peace, Force and Joy. To see how humanists enthusiastically shout these slogans and make the gesture of 1, 2 and 3 fingers with the pronunciation of the words is a way of perceiving the vitality of the movement.

One thing leads to another and to speak of vitality recalls the average age of the participants of the Forum, probably more than 50 years. Although full of energy and commitment, those ladies and gentlemen filled the halls of the event and made the young Andrés -who came from Colombia by bicycle to Punta de Vacas – “where everything began”-, or see Abril -a curious girl full of questions to the participants-, become a motive of particular interest among the public, because they were very young. They were not alone, of course, but they were very much a minority. The renewal of the Humanist Movement – as well as that of the Dialogues in Humanity network – are unavoidable themes. Another related issue, the role of women in the movement, needs to be raised: as in the Dialogues network, they are the majority of the people involved, they happily support the network in its organisation and logistics, in the artistic manifestations and in the reception of visitors, in the role of moderators and articulators, but they are less present as lecturers or in other situations of public relevance and prestige. It is clear that in the patriarchal world in which we still live, the situation of women in networks such as the Humanist or the Dialogues is outstanding, but it still needs to be improved so that their points of view are heard more and their way of seeing and intervening in the world is taken more into account. We could try an internal policy aﬁrmativa, so that the intention of equality -which is undoubtedly shared by men and women- can be lived more intensely.

Observing the dynamics of the Forum, I remembered that in the book I wrote with Ivan Maltcheff – “The New Collective Citizens” – the expression of the novelty of a cultural and political movement was the incorporation of the subtle dimension of its existence, together with horizontality and the search for coherence between what is thought, said and done. I can say that the Humanist Movement expresses itself as a new collective of planetary citizenship. It is organising itself, like others, to renew the culture and human politics and the moments of introspection and collective meditation, as well as organisational co-responsibility and the search for wholeness in action demonstrate it. As Elisabeth Sathouris -a biologist who studied the metamorphosis of the butterfly and placed it as a model for the human transition to a more just, democratic and ecological society- maintains, we need to form a network of networks. For Sathouris, the so-called “imaginary cells” that lead to the metamorphosis of caterpillars into butterflies are innovative entities in their bodies that, by connecting with each other, are building transformation. Metamorphosis is, therefore, a collective work that occurs without bosses, but that is born from the articulation of those who behave differently and know where they want to go. We are already these transforming cells. We need to find the hundreds of other global networks, thousands of other national organisations and millions of local initiatives that are building today the other possible world of tomorrow. Thank you for existing, humanist friends, and for doing the deep work you do on yourselves and on the world.

History is also made of strength, but it is the aspiration for peace and joy that gives it meaning. Strengthen New Humanism! 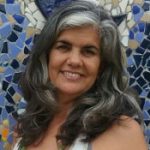