This post is also available in: Spanish, Italian, German, Portuguese

“The world is over-armed and peace is under-funded”, said Ban Ki-moon, well to the point. This is the great challenge that the Peace Congress in Berlin will face. The question of disarmament should be put back on the international agenda and that can only be achieved by civil society and the peace movement acting together.

The same situation can be found in Germany, the Defense Minister von der Leyen has made it clear on Friday that the additional 2.3 billion Euros in military spending is the first step towards the 2% of GDP. This is the requirement for all NATO members and it means 60 billion euros annual defence spending in the case of Germany. This can only be financed through drastic cuts in social, educational and environmental areas. 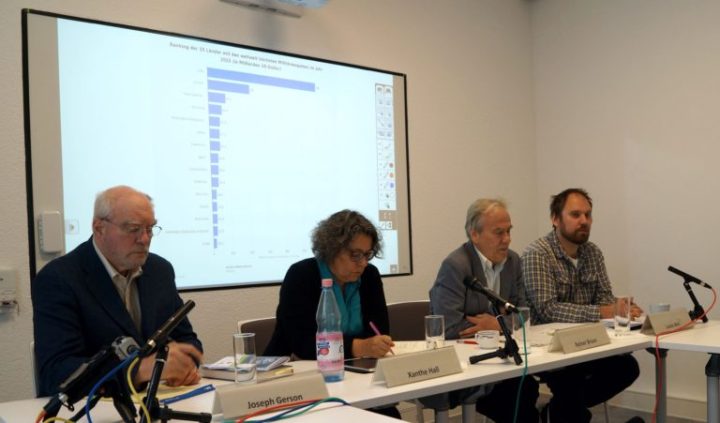 According to Reiner Braun from IPB these figures show the great need for this Congress, which takes place from 30.09. – 3.10. in the Technical University of Berlin. According to IPB information it will be the world’s largest peace meeting in 2016, a kind of UN General Assembly of the peace movement with so far 920 registered participants from 75 countries.

The subject area of the Congress covers all major challenges that the peace movement is facing today to which answers, even partial ones, are yet to be found. The Syria conflict, for example, is covered by three major events. Nuclear disarmament, military spending and arms exports are other issues that will run through the entire Congress.

The discussion will not stop at demands for disarmament but it wants to concretely debate transformation: how to transform the current situation into a new one where disarmament defines the real agenda and policy.

Closer together in the light of war and conflicts

At the end of the Congress, the IPB will present an action-plan to the participants and the organizations present. This includes various proposals for joint actions by the peace movement. “Individual organizations, initiatives and groups have to come closer together to face war and conflicts,” emphasized Reiner Braun. A first step in this direction could be to organize a global day of demonstrations for disarmament next year.

This conference will not only speak about peace, but all participants are invited to an action on Saturday October 1st. On the eve of International Day of Nonviolence (Gandhi’s birthday) to form a living peace sign in front of the university building with 1000 participants.

Nuclear disarmament and a nuclear weapons ban are not sexy

Nuclear disarmament and a nuclear weapons ban are issues that hardly touch the general population or as Xanthe Hall of IPPNW puts it, “these issues are not sexy.” Since the end of the Cold War the erroneous belief prevails that the danger of nuclear war was averted. In reality, the chance for accidental or intentional nuclear disaster is greater than ever. Fortunately, the ICAN campaign manages to sensitize young people on this issue and mobilizes them.

But Hall also provided us with extremely pleasing news. The Austrian Foreign Minister Sebastian Kurz announced yesterday on behalf of a coalition of 127 States that a resolution on a nuclear weapons ban is being put forward at the UN. A majority vote for this resolution is secured and so next year negotiations on abolishing nuclear weapons will start. This resolution is the result of the Humanitarian Pledge that more than 100 countries have already signed.

“For 20 years there has been a complete blockade of nuclear disarmament,” Xanthe Hall explains. With a nuclear weapons ban treaty in hand, the nuclear-free states finally have a lever to overcome this blockade and to exert strong pressure on the nuclear weapons states and their allies. The idea behind it is, “Smokers won’t establish no-smoking areas, it’s the job of the non-smokers”.

“With regards to nuclear weapons, there is a very great urgency, but we see also new opportunities and the disarmament conference comes at the right time,” added Braun.

Lucas Wirl from INES is preparing together with young people from different countries, the Youth-Gathering. “We do not want to enter into substantive competition with the Congress, but young people have the opportunity to meet, exchange and network. The aim is also to empower young people to become politically active and do so in an international context.” There is a very large backlog according to Wirl.

Battle for the minds of the young people 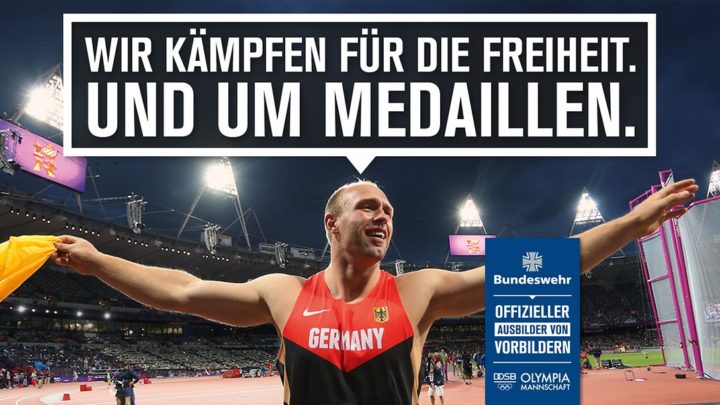 We fight for freedom and for medals. German Armed Forces – Official instructor of role models.

At the end Lucas Wirl stressed that the military have selected young people as a primary target group and consider them an easily influenced part of the population.

The army reforms include an increase of advertising budget and additional training of military personnel for school visits and training for teachers. This tendency may be new in Germany but in the United States it has been common practice for a long time.

“Concerning the youth we will face literally a battle for their minds,” finishes Wirl with a warning and draws attention to the Olympic campaign in which the federal armed forces present themselves as peace-loving and builders of Olympic gold-medal winners.