Bulwarks of the rule of law are closing ranks. Lawyers, professors, judges, and Supreme Court justices are rising up in arms against the red-baiting menace that has bewitched the country.

At the center of the storm unleashed by the red-tagging saga is a brilliant judge of Manila Regional Trial Court Branch 19. On September 21, 2022, Honorable Judge Marlo Magdoza-Malagar – astutely, independently, and courageously interpreting and applying relevant laws and jurisprudence – junked the government’s petition to declare the Maoist-oriented Communist Party of the Philippines-New People’s Army (CPP-NPA) as terrorists. Though appealable, her decision gave rise (in the words of the Supreme Court) to “statements made by a certain Lorraine Badoy containing threats against Judge Marlo Magdoza-Malagar of the Manila Regional Trial Court, Branch 19.”

In a screenshot of her since-deleted Facebook post, a person going by the name of Lorraine Marie T. Badoy accused the judge of allegedly having “passionately lawyered” for the CPP-NPA. “So if I kill this judge and I do so out of my political belief that all allies of the CPP NPA NDF because there is no difference in my mind between a member of the CPP NPA NDF and their friends, then please be lenient with me,” reads the Facebook post of the person who goes by the name of Lorraine Marie T. Badoy. A certain Lorraine Marie T. Badoy served as spokesperson of the government’s National Task Force to End the Local Communist Armed Conflict (NTF-ELCAC).

The Supreme Court swiftly responded to Badoy’s alleged red-tagging of Judge Marlo Magdoza-Malagar. In a full-court statement on September 27, 2022, the Supreme Court warned:

“The Court STERNLY WARNS those who continue to incite violence through social media and other means which endanger the lives of judges and their families, and that this SHALL LIKEWISE BE CONSIDERED A CONTEMPT OF THIS COURT and will be dealt with accordingly.” 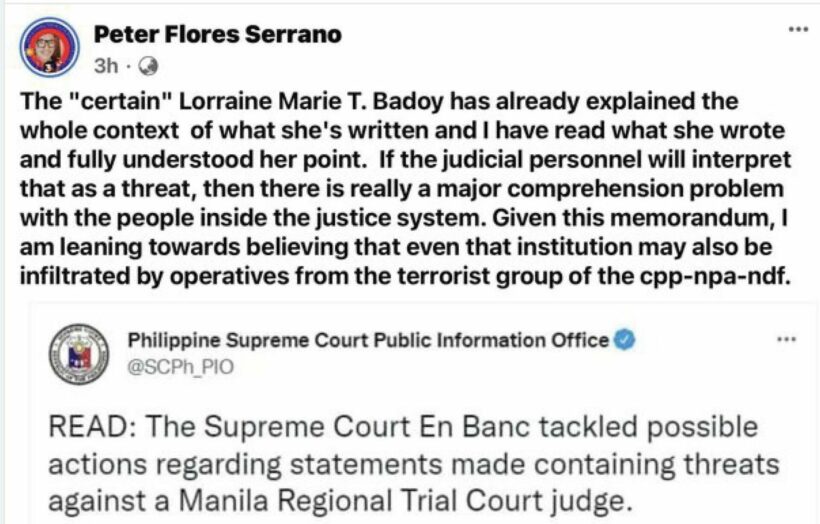 Screenshot shows a Facebook post seemingly red-tagging the Supreme Court shortly after the high court warned against the red-tagging of judges.

Ironically, no less than the 15 Supreme Court justices themselves became the target of the government’s witch hunt. Shortly after warning against red-baiting, the high court was accused by a certain Peter Flores Serrano of allegedly being “infiltrated by operatives from the terrorist group of the ccp-npa-ndf (sic).” The acronyms apparently refer to the Communist Party of the Philippines (CPP), New People’s Army, and National Democratic Front, respectively.

Badoy’s tirades kicked off a maelstrom of protests from the hitherto “passive” judicial sector. On September 24, 2022, a trial court judges’ group, HUKOM, Inc., lashed out at “red-tagging, online vilification, doxxing… as attacks on the rule of law and the independence of the judiciary.”

“We cannot rest easy and accept them as normal and ordinary,” the judges remarked. “These acts must be called out because of their chilling effect on the exercise of our judicial functions and the lasting damage they cause to our institution.”

For its part, the Philippine Judges Association (PJA) “deplores in no uncertain term the undeserved vilification, red-tagging and life-endangerment of a member of the judiciary.”

PJA continues: “We call on the leadership of the present administration to declare that in no time under its watch, will democracy be imperiled by an irresponsible and unfounded assault on a trial judge.”

University of the Philippines law professors appealed to the high court to hold Badoy accountable for allegedly threatening and red-tagging Judge Magdoza-Malagar. In their open letter dated September 27, 2022 to Chief Justice Alexander Gesmundo and the 14 justices, the professors asked the high court “to respectfully consider going beyond its motu proprio action and just providing measures to protect Judge Magdoza-Malagar but to also consider initiating actions to hold accountable Ms. Badoy and those who may, in the future, consider lawyers, prosecutors, and judges fair game for similar attacks.”

They continued: “We further ask the Court to consider issuing the appropriate rules to ensure that lawyers, prosecutors, and judges who may find themselves similarly attacked may have a meaningful remedy under law.”

“The issuance of such rules would be the best way to end what the Court today started. Mr. Chief Justice and esteemed Members of the Supreme Court, may it please the Court, we ask once again for your timely and motu proprio intervention to protect your own officers,” the professors wrote.

They told the court: “Both Judge Magdoza-Malagar and Chancellor Leo Malagar have been members of the UP Law faculty as lecturers. Ms. Badoy’s statements should not be allowed to remain unaddressed.”

“The threat to kill another is a felony punished under our criminal laws. Red tagging violates the Basic Principles on the Role of Lawyers,” they stressed.

“Both undermine the rule of law and represent the continuing impunity which is key to the modus operandi of Ms. Badoy and her ilk,” they added.

The professors lauded the high court’s “unprecedented action by issuing a Statement and announcing specific initiatives to protect lawyers, prosecutors, and judges.”

“We thank the Court for taking action motu proprio today by issuing a stern warning against those who would incite violence against members of the judiciary,” the professors averred.

In a separate open letter dated September 30, 2022, lawyers Edre Olalia and Evalyn Ursua led at least 485 lawyers in urging the tribunal to take “action against attacks on judicial independence.” Olalia and Ursua, both long-time human rights leaders, expressed support for the high court’s “efforts to ensure that ours will always be a society of rules, of democratic and critical discourse, and that protects human rights.” (In the course of covering the women’s human rights movement, this author personally met and interviewed Ursua on several occasions for The Manila Times.) Olalia and Ursua vowed to “discuss with our colleagues specific actions that members of the Bar could take to contribute to the many efforts to put an end to the culture of impunity and disrespect for the rule of law in our country.”

Red-tagging has been strangulating the country’s democratic institutions and undermining the rule of law. Even food pantry volunteers were surveilled and red-tagged by the government during the covid-19 lockdown.

“You can count on us”

Chief Justice Alexander G. Gesmundo assured judges that the high court “is very serious about protecting our frontliners.” In addressing the Annual Convention of the Metropolitan and City Trial Judges Association of the Philippines, he said: “While it is our constitutional duty to supervise our lower courts, it is our moral duty to protect each of you and ensure that you are able to perform your duties free from any threat, harassment, undue influence, coercion, and, certainly, any form of violence.”

The Chief Justice vowed: “You can count on us.”

So, are you also a “communist”?

Government’s vicious red-tagging witch hunts show the security sector’s dangerous authoritarian bent. Red-tagging operates as a thought inhibitor, considering the unsolved slayings of at least 427 activists. Authorities red-tag individuals and groups as a thought control and censorship device to prevent them – citizens and public officials alike – from expressing thoughts, views, or ideas that deviate from or contradict the witch hunters’ own narrow and often militaristic and undemocratic worldview.

Verily, red-tagging pierces through the very heart of individuals’ and people’s democratic rights to freedom of speech, press, expression, association, and assembly –the very core of their power to protect and defend their own democratic and human rights from government’s abuse of power and corrupt practices.

Undergirded by a police and military mindset steeped in the national security ideology of the 20th century Cold War era, state functionaries, together with top police and military officials, capitalize on the 5-decade old Maoist insurgency to smokescreen their self-enrichment from billions of secret intelligence funds that they control and spend without any transparency, nor any accounting, auditing, or external oversight.

They indiscriminately employ red-tagging to stifle people’s calls for transparency and accountability in political governance. Scoundrels institutionalize red-baiting to sow fear and insecurity among the people and perpetuate their perennial hold on power.

An awarded poet and investigative journalist, Perfecto Caparas is a licensed attorney and lifetime member of the Integrated Bar of the Philippines.