International Coalition Against Enforced Disappearances (ICAED) Calls Attention to the UN International Day of the Disappeared, held each year on August 30

On August 30th, everyone should ask that question and wear a white scarf as a sign of solidarity with the many victims and of protest against the crime of enforced disappearance.

One calls “enforced disappearance” a crime (and a human rights violation) that consists of State authorities detaining a person while denying that detention[ Art. 2 of the CED convention defines enforced disappearances as follows: “enforced disappearance” is considered to be the arrest, detention, abduction or any other form of deprivation of liberty by agents of the State or by persons or groups of persons acting with the authorization, support or acquiescence of the State, followed by a refusal to acknowledge the deprivation of liberty or by concealment of the fate or whereabouts of the disappeared person, which places such a person outside the protection of the law. Art 3. Refers to similar acts (without calling them enforced disappearances) when committed by persons or groups of persons acting without the authorization, support, or acquiescence of the State, insisting on the state’s obligation to bring those responsible to justice.]

The absence of information leaves the detainee fully at the mercy of those detaining him (or her), without any protection from the law.  An enforced disappearance often is the prelude to torture and/or murder. It also has the effect of spreading fear among groups of persons or silencing an entire society. Without information about the whereabouts of the person, about the circumstance of the disappearance, or about those who made him/her disappear, relatives are left alone in their search for the disappeared person. State authorities generally don’t undertake investigations, and their response is sometimes aggressive, but in most cases fully passive.  Therefore, Louis Joinet (the French UN Expert, 1934-2019) called enforced disappearances the “crime of organized oblivion.”

Millions of relatives of disappeared persons worldwide still hope to hear the truth about the fate of their disappeared family member. Hardly any of the perpetrators of enforced disappearances are ever brought to justice.

In the meantime, new conflicts and repressive regimes are generating new cases of enforced disappearances.

Countries can protect persons from this abominable crime by taking measures set in international human rights treaties. The main treaty is the International Convention for the Protection of All Persons from Enforced Disappearance of 2006. Unfortunately, only 68 countries have ratified this convention so far, and only 23 allow its monitoring body (The Committee on Enforced Disappearances)  to examine individual complaints from victims.

In 2011, The UN declared the 30th of August to be the “International Day of the Disappeared”. Yet most member-states keep silent on this occasion, and, sadly, this international day is celebrated merely by the relatives of disappeared persons and by a handful of other stakeholders (UN agencies, NGOs).

The rallying symbol is the white head scarf with a question mark (or, alternatively, a white handkerchief or T-Shirts with the same symbol).

Making Solidarity Visible with the Symbol: A White Head Scarf with a Black Question Mark

The symbol chosen to show solidarity on International Day of the Disappeared (the white scarf with the black question mark) is, of course, inspired on the scarfs still worn today by the Madres (mothers) and Abuelas (grandmothers) of Plaza de Mayo. This was the distinctive that they wore during their four decades of silent marches around the fountain on that central square in Buenos Aires.

In the past forty years, many relatives of the disappeared used the same distinctive, or with slight alterations in very similar peaceful protest rallies.  (along with other symbols used at international level for national campaigns). Pictures of the disappeared, banners and slogans as “Nunca más! (never again); Hasta encontrarlos! (Until we find them) Vivos los llevaron, vivos los queremos! (They took them alive; we want them alive), etc.”

ICAED chose the white head scarf with the question mark as a visible and unifying sign, for all relatives worldwide, but also for all those who feel compassion for their suffering, who want to display their solidarity, and rally in the campaign to advocate for truth, justice, memory and redress as well as for effective prevention of this crime in all countries of the world. 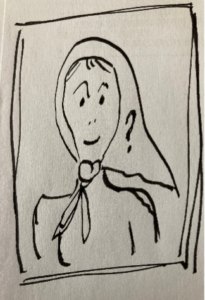 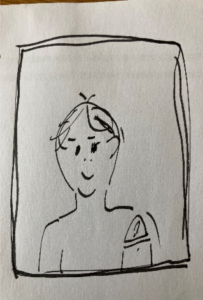 On 21 December 2010, by its resolution 65/209, the UN General Assembly expressed its deep concern about the increase in enforced or involuntary disappearances in various regions of the world, including arrest, detention and abduction, when these are part of or amount to enforced disappearances, and by the growing number of reports concerning harassment, ill-treatment and intimidation of witnesses of disappearances or relatives of persons who have disappeared.

Many organizations of relatives already celebrated this international day long before it was officially recognized by the UN. The day was used to give tribute to the disappeared and in practice, to give visibility to the issue.