In the year that the Treaty on the Prohibition of Nuclear Weapons enters in force, a new variety of rose will be planted in Spain. The Setsuko Thurlow Rose, a rose of hope, will be planted in a prominent rose garden in Madrid on the International Day for the Total Elimination of Nuclear Weapons, September 26, 2021, with the nameplate “Setsuko Thurlow”. The rose was cultivated by Matilde Ferrer, a world-renowned rose breeder and President of the Spanish Rose Society. Matilde describes the Setsuko Thurlow Rose as a “beautiful, multicolored rose, delicate in appearance, yet resilient. It does not lose its leaves throughout the year”.

Upon hearing of this new rose variety, Setsuko wrote a letter of thanks to Matilde:

I am delighted and grateful to understand that my friends in Spain are prepared to honor me with a new breed of rose with my name that has been cultivated and created by you. What a totally unexpected pleasure and honor for me. My long-held love and respect for people of Spain and your rich culture will now be deeply and permanently cemented with this lovely Setsuko Thurlow rose.

As a 13-year-old schoolgirl, I witnessed my hometown Hiroshima blinded by the flash, flattened by the hurricane like blast, burned in the heat of 4000 degrees Celsius and contaminated by the radiation of one atomic bomb. A bright summer morning turned to dark twilight with smoke and debris rising in the mushroom cloud. I saw a mass of grotesque, ghostly figures — bleeding, burnt, blackened and swollen, with skin and flesh hanging from their bones. My beloved Hiroshima disappeared from the face of the earth, with about 300,000 men, women and children indiscriminately killed instantly by the bomb, and over time by the continuing effects of the radiation — still claiming the lives of survivors more than 7 decades since that time!

In the aftermath of the atomic massacre, there was a rumor that no grass or plants or flowers would grow for 75 years in the land affected by radioactive poison. But the following Spring oleander blooms electrified the people with joy and thankfulness to realize that our lives would continue! The lovely white and pink oleander blossoms brought back humanity and hope to the people and the city of Hiroshima.

After seven decades of determined activism by some progressive non-nuclear weapon states and likeminded citizens from around the world, we achieved the historic UN adoption of the Treaty on the Prohibition of Nuclear Weapons in 2017 and its entry into force in January 2021. Nuclear Weapons are now illegal under international law. I will keep you in my thoughts and prayers as Spanish people continue to struggle to have Spain sign and ratify the treaty, joining the world community to achieve our ultimate goal, the total elimination of nuclear weapons.

Nuclear Weapons threatened everything and everyone we love. All things of beauty, like this stunning rose variety, are threatened by the existence of nuclear weapons. May this beautiful flower flourish in a future where nuclear weapons are finally eradicated from our one beloved and precious planet.

Your generosity is now strengthening my dream and aspiration for a new world free of nuclear weapons, founded on principles of peace and justice for all people. I thank you most sincerely from the bottom of my heart for your loving kindness. 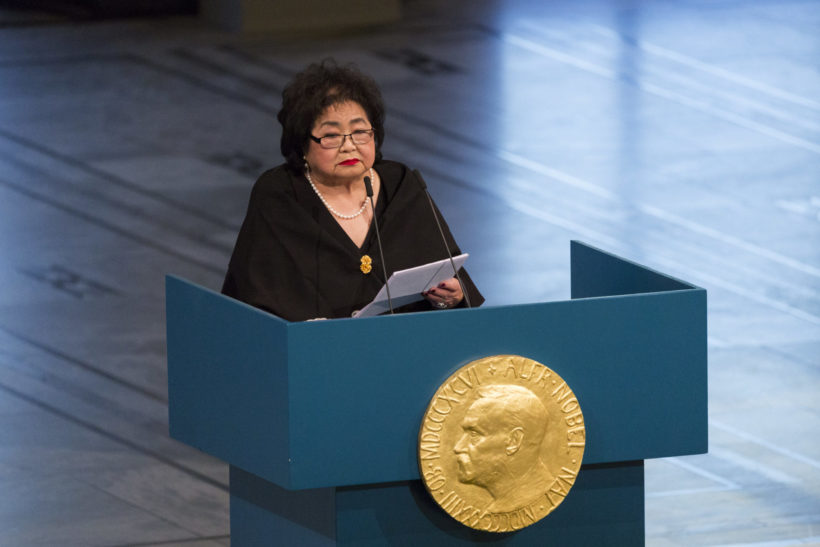 Many thanks to Matilde Ferrer for her beautiful flower cultivation, and to Belén Yuste and Sonnia Rivas-Caballero, the co-organizers of the “Nobel Women” exhibit who contacted Matilde with the idea of a rose for Setsuko, as well as ICAN’s own Dr. Carlos Umaña, Co-President of IPPNW, for bringing Setsuko to Spain in February 2020.

On this 76th anniversary of the Atomic Bombing of Hiroshima and Nagasaki, and the year in which the TPNW entered into force we honor the life and legacy of Setsuko Thurlow and her tireless action and advocacy for a world without nuclear weapons!