Hibakusha Park is a memorial in honor of the atomic bomb victims of Hiroshima and Nagasaki on the Nimy campus of Mons University in Belgium. This park, dedicated to the abolition of nuclear weapons and created by Professor Pierre Piérart in 1989, has lost its appeal more and more.

Some associations including the Humanist Party of Belgium, which organizes the commemoration every year, have decided to revitalize the place with the help of the students. For this reason, the students of the Faculty of Architecture and Urban Design worked on the renovation of Hibakusha Park in the 2019/20 school year under the direction of Prof. Simon Blanckaert. Inspired by the 17 projects that have been created, an agora, paths and didactic boards are initially planned for 2021. 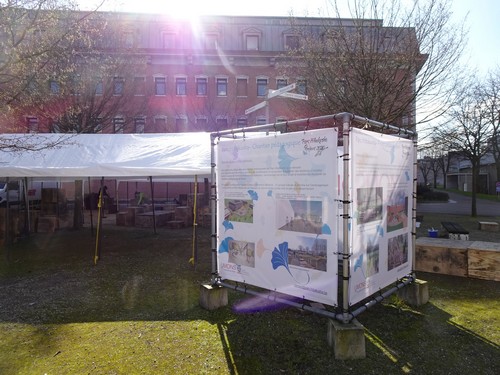 During the week of March 13-19, 2021, the students developed a model during an educational workshop to illustrate the future project for their campus. With old wood and a lot of enthusiasm, they created model boxes, information boards and a mural on the subject of the abolition of nuclear weapons.

The next step is now to develop tender documents for the construction of the new agora.

This project is carried out with the support of the University of Mons. The city of Mons is also connected to the Mons Memorial Museum and a route between the different places in the city.

The students are particularly motivated and a computer graphics student (HEAJ) (tn: Haute Ecole Albert Jacquard)from Namur is also working on the project.

This model enables the press and television news to get to know the park and its purpose. A brief study had already been published on Belgium’s mixed political stance on the possession of nuclear weapons on its territory. 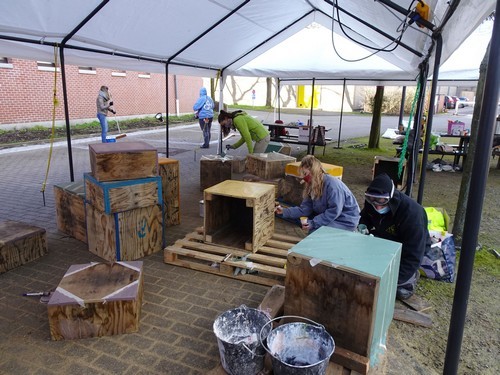 Indeed, there are American nuclear weapons in Belgium that will soon be modernized. In addition, a double-digit billion amount is being invested in the purchase of nuclear weapons-compatible combat aircraft for the possible use of this weapon.

Paradoxically, Belgium is the country where most of the municipalities are members of Mayors for Peace, an association of mayors for peace founded in 1982 on the initiative of the Mayor of Hiroshima. Two-thirds of Belgian municipalities are part of the movement and are calling for the abolition of nuclear weapons.

For us, members of the New Universalist Humanism, this project, in which we have been heavily involved for several years, is a beautiful promise for the future to inform and involve more and more people about the topic of the abolition of nuclear weapons.