“Streets and protests carry the virus and give birth to disease” (Michalis Chrisochoidis, Greek Minister of Citizen Protection, 14.11.2020)

In striking opposition with the recent decision of the European Parliament that the corona pandemic should not be used as an excuse to undermine European values and democratic freedoms in member states of the EU, the Greek government issued an emergency law that forbids all public gatherings between the 15th and the 18th of November, targeting, in reality, the annual demonstration that takes place on November 17th and commemorates the students’ uprising of 1973, that marks the turning moment for the reconstitution of democracy. Even worse, even before the emergency law was issued, students and members of Left-wing organizations have been arrested, on the pretense of calling to civil unrest, because they were handing out calls for the above-mentioned demonstration. On top, a policeman’s wife was killed yesterday by an accidental firing of her husband’s gun, which he had brought home in case it would be needed should the demonstration take place.

Taking into account that other gatherings have been taking place regularly (or almost regularly) during the pandemic, most characteristically Church sermons with massive participation and no kind of health protocol and that no provision has been made for ameliorating public transportation (where passengers pile up, literally “hanging” against the doors) or for reinforcing the public health system, what is now happening in Greece is systematic cultivation of fear that serves as a pretense for attacking the core freedoms of the people and critical thinking in general. Bit by bit, cases of state and police authoritarianism back up the fear that in the country an agenda against every kind of civil rights is being played out with the excuse of the situation of emergency that the pandemic has shaped. 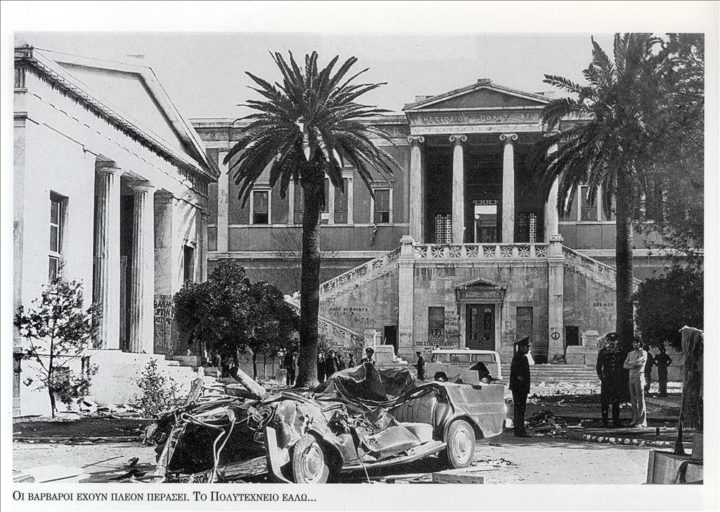 “Photograph of the day of the invasion of the greek armed forces in the Polytechnic University of Athens”, 1973, ASKI archives.

*Emilia Salvanou was born in 1972 in the USA. She conducted her research at the Department of History and Archeology of the University of Athens (1989-93) and wrote her PhD in history in 2006. She then dealt extensively with the memory of displaced groups of the 20th century in the Balkans, while conducting her postdoctoral studies at the University of Athens (2012). Her current research interests include historiography, memory and historical culture.