The president of the autonomous indigenous government is still detained

Princess Barberena, a black Kriol environmental and feminist activist from Nicaragua has been detained by Nicaraguan soldiers on September 27, along with Kriol forest ranger Roger Joseph and 16 other black and indigenous leaders, lawyers, and forest rangers from the indigenous Rama-Kriol community. The 18 activists were held in a house near Boca de Sabalos, in the southeastern region of Nicaragua, and 17 were released later that same night. Jaime McCrea Williams, president of the Territorial Government of Rama and Kriol, has been taken by the army and not seen since. According to journalist Gerall Chavez, McCrea has been allegedly taken for investigation at Boca de Sabalos.

The Rama and Kriol leaders were deprived of liberty when they were documenting environmental degradation and land grabs in their Indio Maiz biological reserve, according to local environmental NGO Fundacion del Rio. 70 percent of the reserve legally belongs to the Rama and Kriol, who have political territorial rights over their land since 2002. Indio Maiz is one of the two Nicaraguan reserves recognized by UNESCO for its diversity. It is crucial to the Mesoamerican biological corridor. Since 2015, self-trained Kriol and Rama forest rangers monitor deforestation and land grabs in the biological reserve, as state forest rangers have become rarer and rarer.

In Nicaragua, pressure has been mounting on autonomous indigenous and afro-descendant communities on the Caribbean Coast in the last decade. President Daniel Ortega planned on receiving investments from Chinese company HKND to build an inter-oceanic canal through Nicaragua, thereby encroaching on indigenous land. This was met with widespread resistance by indigenous communities and the wider public. The plans of a canal are dormant for now, but for lawyers, scholars, and local Rama and Kriol people, it explains why the government of Daniel Ortega apparently is failing to stop deforestation in the reserve. The settlers are farmers, miners, and Christian pastors who put cattle, build communities, sell acres of land, or find natural resources to sell. Between 2000 and 2018, Indio Maiz lost 52 percent of its tree cover. The Nicaraguan environmental NGO Centro Humboldt warned in 2017 that if deforestation continues at this pace, Nicaragua’s forest would be gone by 2028. 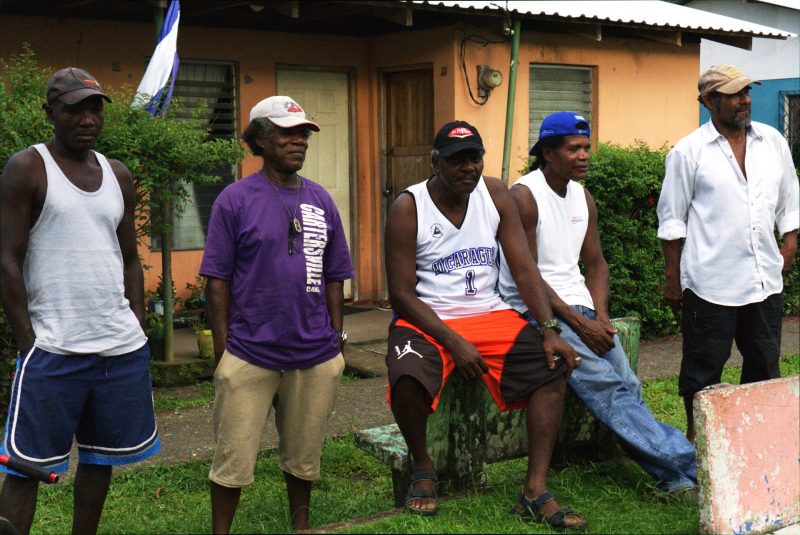 Kriol forest rangers. Photo taken by the author in November 2019.

The Ortega government has intensified its repression against political opposition and NGOs since 2018. During anti-government protests, more than 300 youth died under the bullets of the state’s anti-riot security forces and paramilitaries. Daniel Ortega is accused of committing crimes against humanity. Since then, more than 50 journalists fled the country and 86 democracy activists and members of the political opposition remain behind bars, nearly a year after 96 political prisoners were released. Many have alleged to have suffered torture in Nicaraguan prisons.

This is how the head of the military barracks arrived at this indigenous community, flanked with several members of the army, with AK rifles to intimidate the indigenous leaders who were trying to document the invasions of their lands, which have been encouraged by the FSLN. pic.twitter.com/coxwDnhZYA

Barberena and other afro-indigenous women demand the soldiers to stop pointing their AK-47 weapon on indigenous president Jaime Williams when they took him away. According to the press release later published by the Nicaraguan Army, the armed forces were doing a routine identification check on the people going through the reserve.

A contingent of the Sandinista Army [Army of the Government of Daniel Ortega, leader of Sandinista party] takes indigenous leaders of the Rama Kriol territorial government hostage. Here you can see the aggressive behavior of the soldiers who point their AK-47s against a disarmed man who does not have any gesture of resistance.