I have already lived many ends of stories, cycles, relationships. Revolutions that change those who sit at the decision table, new loves that change the geography of our bodies. Every day in our lives, a new world of cells begins, and others disappear, they slip down our skin and vanish in the air.

(on) That September 11th -as it is going now – my world ended and began again, and it did it in the same place.

The day I left Rio to go to New York with a daytime flight was a nice and cold Sunday in winter. I my intention was to go and stay, being disappointed -as many times before- by politics and loves. In certain moments, particular planetary positions or negative quadrature bring you far away. The furthest place where I could go was a little office of some friends in Manhattan, where I would participate in an editorial project. In reality, I was exiling myself, but no one had to know it.

For the first weeks, I lived as a guest in a tiny apartment near the World Trade Center, the Twin Towers, that cast their shadow on many buildings and dreams. I was standing there, in a square between two skyscrapers, and I was looking at the sculpture of a bronze globe, where I usually sat in the morning before I went to the East 42, where I worked. It was almost a ritual to sit there and watch the people going in and out these huge glass and steel doors, proud with their passes. One day I called my mother to tell her “Dona Arlete, someday soon I will work in these towers”. I should have never said that. When, that morning of the 11th September, the airplanes crashed against the concrete walls, my mother thought desperate that I had already fulfilled my dream and that I had disappeared during that end of the world.

I was still sleeping when she, desperate, called my friend Silvio, who worked at that time as a journalist at the “Estadão”. I had no internet, no phone and not always access to emails. He was my connection to her and other friends. He had the luxury of having access to emails – yes, you may laugh but the world in 2001 was totally different. It was the world before what we lived until February.

Still sleepy, Silvio tried to call Dona Arlete, who shouted “Someone is destroying the Towers, Marco is in there” – Calm down, said he, betting that Arlete mixed up the Bom dia Brasil (TN: a tv program broadcast in the morning in Brazil) with a film on destructions – “it’s just a film of Godzilla”. No, it was not. I did not die in the attack, but the rumour spread in such a way that years later, when I came back to Rio on holyday, I still met people who where astonished to see me alive. “But weren’t you there…?”.

More or less – Let me explain.

I was nearby, I saw a part of the tragedy, for many days I breathed that air that smelt like concrete, but that morning my boss Sabrina (also from Rio but well integrated in the city) and I had decided to run away from thar area and have a barbecue at her place, a cosy residence in the West 87, near Central Park. I spent many years trying to hide that escape, but in reality, we were certain that it was the beginning of a war, that we were sitting on a target and that the attack would be just the beginning of a new endless conflict.

We drove through the Sixth Avenue with the image of one of the two Towers burning. When we arrived at the beginning of the park and behind us everything was already covered in a brown cloud. Dreams and lives disappeared in those concrete cloud. We run in the opposite direction, with a shopping cart full of the office supplies we could save.

Alone and without relatives, with the fridge packed with meat and with only the TV that could show us that also other places had been attacked, we decided to do the barbecue, to watch the CNN announcing a counterattack. And there we would have been, again, sitting on the target, with no possibility to get out of Manhattan, without phones, without way out. We were sure that our story would come to an end there, and that at a certain point, we would be hit by that same cloud. It was an “end of the world”, of loneliness and desert streets that I would see again, in the same city, almost twenty years later.

Chuchu followed us in the shopping cart, completely indifferent to our desperation. It was a jittery pinscher that was running between our feet in that bunker waiting for the barbecue… As if it was on the prow of an adrift Titanic, in the shopping cart, it enjoyed the sweet wind. Around us, a crowd of people was running away from the area, as we were doing, without knowing if other buildings would be attacked or destroyed.

How will the world end?, I sked myself. Could it be a nuclear explosion? What if everything became dark? I must be as in the science-fiction movies, I am sure.

Due to the lack of any experience in barbecuing without charcoal – it requires stones soaked with kerosene –, I forgot to put a sheet of aluminum foil to separate and protect the meat from the heat. Even Chuchu could not eat those contaminated steaks with a terrible taste. The afternoon came to an end, as all the supplies of beer and meat, also with the help of the neighbours who came curious – in the end, what kind of crazy people are these?

Sabrina, Chuchu and I went out in the street, wearing gas masks – yes, she had them at home, do not ask me why – looking for information. “In the end, this is the end of the world, isn’t it?”, I asked myself. How will tomorrow be? In reality, after the attacks, we suffered a series of biological attacks sent by post – a powder called anthrax – and the fear of war went on for months.

Dona Arlete, who was desperately looking for information, could just get to know at the end of the day that I was not working in the World Trade Center. She was relieved. The following days and months were very similar to what I am experiencing now, without any idea of what will be of my work and of my life. Twenty years later, without Chuchu and my boss with me, I remembered that 11th September. Nightmarish days, desert streets, curfew. The end of the world has always the same scenography of a B-movie. It is a strange feeling being in the centre of some war or tragedy. I had the luck to experience it twice. What a privilege, what a fate.

I open the curtains and see the sun is already up, it is summer again here. The silhouette of the buildings and the colour of the sky made me remember that day of September. There is no smoke anymore. The air seems clean. Almost all the characters of this story are already dead or got lost in life in the last two decades. I have resisted and come back on that same set. I am a stubborn person as I want to see the story ending and starting again, sometimes. With a pang, I think that once again a beautiful day has begun and that I am going to enter in a wonderful new world.

First day of return in the new “normal” world, in the former epicenter of the Covid-19 pandemic, June 2020. 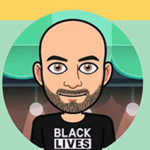