Europe must study what has been done in China and what is being done in Korea and Italy against the coronavirus in order to imitate and improve the effective measures that have been taken.

On 7 January, a few weeks ago, China informed the world of the discovery of a new virus, unknown and therefore very dangerous because there is no immune defence, its behaviour is unpredictable and there are no tools to deal with it. China has immediately taken drastic measures which have led to the isolation of entire cities and more than 60 million people. The life and social behaviour of a nation with a population of almost 1.4 billion has changed. They closed factories and jeopardized the economic supremacy they had achieved over decades of hard work. It was clear that they were facing a major problem. But despite this evidence and the warnings coming from the WHO, European governments have reacted very superficially and without any coordination. Perhaps politicians were distracted or incompetent. Perhaps they were preoccupied with daily concerns or future election results. Maybe they were faced with the choice of prioritising people’s health or business, the economy, markets…

Some countries like Italy took some measures such as ending direct flights from China at the beginning of February, which was obviously useless since it didn’t apply to the whole of Europe. The information given to citizens was superficial and contradictory. Even “experts” told the media that the new coronavirus, being a simple flu, meant that there was no need to worry. Citizens were treated like children and the lack of information created panic and gave way to the spread of the famous fake news.

Inevitably the storm broke and it did so in Italy on 23 February. Cases began to multiply exponentially and more and more decisive and strong measures were taken. Finally, there was also some clarity on the problem. This new coronavirus is not a simple flu, but neither is it SARS or Ebola. It is a new virus, humans have no antibodies and therefore it spreads very easily. As it’s an unknown virus, not much is known about it. About half of the officially infected people need hospital treatment and about 10% need hospitalization in intensive care. If the infection spreads to a large number of the population, healthcare facilities may not be able to assist the sick, especially if doctors and nurses are ill.

What has been understood, first in China and then in Korea and Italy, is that since there is no cure or vaccine the only remedy is to avoid infection. Hence the measures that aim to avoid physical contact between people: washing your hands, avoiding crowded places, keeping a distance of at least one meter from others, closing schools, theatres, sporting events, limiting travel only to what is necessary…

But despite the mistakes made in January, despite what is happening in Italy, many European countries continue to face the problem with little clarity or decisiveness. In February, the coronavirus alert broke in South Korea, but direct flights from Korea were only suspended on 5 March. The information circulating is confused, part of the population is in panic, but without changing their social behaviour. Another part, sceptical, believes that it is just a simple flu. It is impossible to find a mask or hand sanitizer in the whole of Prague, where I live. In a serious development, an attempt has been made to identify the culprit for the spread of the virus in Italy. In this way, attention is being deflected from the fact that we are facing an epidemic that affects the whole of Europe and the whole world, as the WHO has continually said. 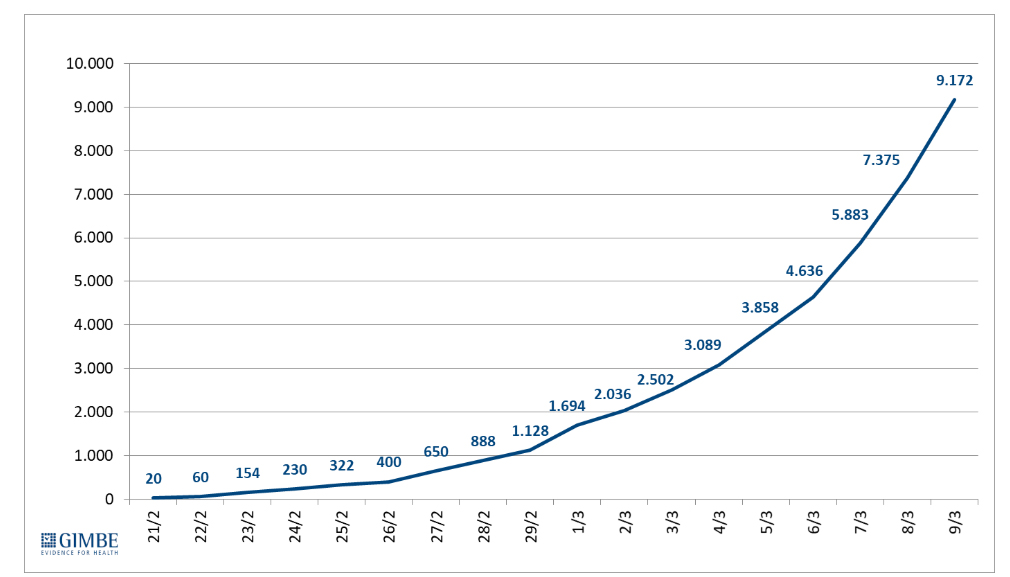 Chart of the spread of the virus in Italy.

Most probably what Italy is experiencing these days is what will develop in other countries (although in our hearts we strongly hope that this will not happen) if the necessary measures are not taken. But this is only possible if you put people’s health above economic interests and powers. Certainly behaviour like that of Czech Prime Minister Babis railing against Italy and the French President Macron going to the theatre to calm the population is not what we need right now. We need serious investment in public health!

We need to study what has been done in China and what is being done in Korea and Italy to imitate and improve the effective measures that have been taken. On the one hand, it is necessary to slow down the spread of the virus and, on the other, to strengthen health care facilities, expand the number of beds, especially in intensive care, hire new medical staff and provide the necessary medical facilities. On the one hand, governments must take responsibility for the situation, and on the other hand, people need to understand that it is not just a question of how to protect themselves against the virus, but above all how to help others, and especially the weakest, to not be infected by it.