Whilst the world has been bursting with bad news (Trump’s failed impeachment, Bolsonaro’s assault on Brazil’s human rights and the Amazon, pipelines, climate change and failure of climate discussions in Madrid, Australian fires, the Brexit debacle, Bolivia coup and descent into tyranny, the coronavirus, etc) the Second World March for Peace and Nonviolence has continued its determined journey through the planet promoting a new culture of peace, human solidarity, freedom from oppression and meaning, all based on the methodology of nonviolence.

After leaving Africa https://www.pressenza.com/2019/10/the-2nd-world-march-for-peace-and-nonviolence-from-marrakesh-to-tenerife/ via Senegal (On October 27 and 28, the 2 World March was hosted in the city of Thies, Senegal), arriving in Saint-Louis, then visiting the villages of N’diadiane, in the region of M’bour – Thiès and Bandoulou, in the Kaolack region. On November 1 and 2, the West Africa stage of the 2 World ending in the Dakar area, with activities on the Island of Gorea and Pikine) the March entered Latin America via Mexico.

At the same time, the Genoa to Barcelona “Mediterranean Sea of Peace” initiative of the World March met the Hibakushas, Japanese survivors of the Hiroshima and Nagasaki Bombs on the Peace Boat which was stationed in Barcelona. 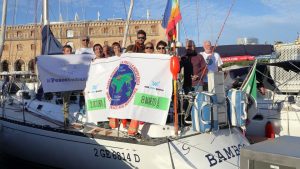 Mexico: Mexico City, San Cristobal and Guadalajara between the 8 and the November 15.

The stay in Mexico came to an end and continued to the next country. The Marchers went to the border with, Guatemala: different departments of the West paying tribute to the victims of the so-called ”War of Soccer“ between Honduras and El Salvador.

Given the serious circumstances that occurred in Bolivia, a call was made from the World March for the UN to intervene against the wave of racist violence in progress following the coup d’etat.

In Ecuador, a great Cavalcade for Peace was prepared and the Montubia de Guayas, Manabí and Los Ríos Integration Committees prepared for this great event. The Cedhu joined the March, organising events for December.

Honduras: on 25 / 11, International Day for the Elimination of Violence against Women, activists of the World March participated in the demonstrations of San José and Santa Cruz, Costa Rica.

Panama: at the Museum of Freedom, interviews in the media, at the Soka Gakkai International Panama Association (SGI).

On October 27 and 28, a forum was held in Costa Rica with the motto “THE GREAT TURN OF HUMANITY IS IN OUR HANDS”.

Students from three schools with a student from the Faculty of the UN came together in the Municipal Pavilion.

The World March Base Team visited Loja, their first activity was at the Gerald Coelho Convention Center.

32 national and foreign artists participated in this event for Peace and Nonviolence.

From there the March went to Colombia and Peru.

On December 1, the World March was present at the 13th Migrant March in Sao Paolo, Brazil.

On December 26 and 27, the International Base Team participated in different activities in Córdoba, Argentina.

This December 28, the Base Team of the 2nd World March arrived in Mendoza, Argentina, being received at the Municipality. On December 29, the members of the World March Base Team arrived at the Punta de de Vacas Park, at the foot of Mount Aconcagua, in their last stage in Argentina after passing through Iguazu, Buenos Aires, Lomas de Zamora, Parque la Reja , Tucumán, Córdoba and Mendoza.

A simple and meaningful tribute to Silo in the Sala de Punta de Vacas Park of Study and Reflection by Rafael de la Rubia, General Coordinator of the 2nd World March.

“Ten years ago in this same place, the Punta de Vacas Park, culminated the 1ª World March which started in Wellington and after touring 97 countries for 93 days promoting peace and nonviolence as a methodology of action.

Today we are here after these ten years to pay tribute to the figure of Silo who inspired that 1st World March.

He supported an open and inclusive march that accommodated all the sensibilities of peace and nonviolence.

On that occasion the first objective of the World March was nuclear disarmament. Today we have to celebrate that we are closer to getting it. It is almost certain that in the coming months we can celebrate the “beginning of the end of nuclear weapons”.

From here we call on all citizens to promote this action because it affects us all.

Especially convincing the unbelievers, undecided and discouraged to support this just cause in favor of the human species: the end of nuclear weapons.

Silo pointed them out as the greatest threat to humanity.

At the moment there are important mobilizations in several countries of the world, and especially in Latin America.

Some result in social convulsions with tragic balances of violence.

Now it is necessary to remember the message that Silo gave from this place proposing the “overcoming of pain and suffering.”

Overcoming pain – he said – has to do with improving the living conditions of citizens without any exclusion. This is a great task pending.

He also spoke of overcoming suffering. This had to do with having coherence and finding meaning in life.

To do this what we think, feel and do must converge.

He also indicated the importance of dealing with others. He said it was necessary to learn to treat others as one would like to be treated.

In this same place Silo recalled other great souls, prophets of nonviolence, which we will also remember when passing through their countries.

Make visible the methodology and proposals of Nonviolence

We hope that this World March will make visible the methodology and proposals of nonviolence.

May its echo travel through all corners and towns of this America.

That it touches its women and its men, but especially it is destined to its young people, to together design an America of the future and that it is the common house for all its inhabitants.

Thank you Silo for your teaching and for your example of life!” 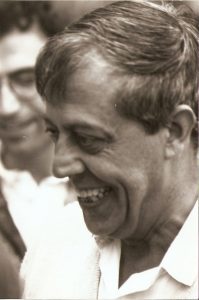 The event culminated with a shared lunch where the Municipal Choir accompanied with delightful with beautiful songs.

Promoters of the March in Chile participated in the actions of civil disobedience and non-violent actions.

Extracts and pictures from the World March blog by Antonio Gancedo

Next instalment: the World March in Asia.