A little while ago we wrote about a new mental landscape appearing in Chile. And we said that this positive phenomenon will happen everywhere, within a few years.

There are protests all over the planet but they do not seem to be manifestations of this new landscape –that may or may not last in Chile.

So, it is reasonable to ask, how will we know whether we are in the new landscape or in the old one? If we are in it, what can we do to make sure it continues? And if we are not in it, is there anything we can do to accelerate the process?

The old and the new landscape have different origins and the direction to which they are heading is also not at all the same.

You could say that the old landscape is, among other things, like a conglomerate of different beliefs and every belief has at its roots, the fear of disappearing.

Many and varied compensations arise in our attempts to get out of the grips of this fear. Some do it through power, others having all kinds of securities, be that objects, friends, associations and of course the family. It is also clear where this landscape is going: it is going to a future that ends in death.

Independently of whether that is actually so or not, that is what people feel, so they try to avoid having this fear at all costs.

The origin of the new landscape is completely different. It is another plane, another dimension. When it appears, like it did in Chile, it appears to come from nowhere. So, it is hard to say if its origin is coming from the past or the future, probably from both or neither one.

It pushes us to become aware of who we are and where are we going. In reality we are all going towards having a completely open future, or immortality, if you like, because that’s the only way we can lose the fear that controls the old landscape.

We are also going towards being truly humans, not just being nice and doing things for each other but also feeling like we are a part of this one body that is called humanity. We don’t feel that today and maybe not tomorrow, but we are moving in that direction.

The new landscape also has to do with a new level of consciousness. We’ve been for a long time on a fairly low level, somewhat of a slumber-like state. There are great potentials within the consciousness, just waiting to be explored and put into use. Thus each individual can be more alert, perhaps even awake.

So, the first indicator of knowing the distinction between the two landscapes is being aware of where the process comes from and where it is going.

Then we can also examine different behaviours that we have. The old landscape tends to be loaded with centripetal or egotistical tendencies and have an abundance of internal violence which expresses itself in different forms of external violence.

The new landscape is characterised by the relationships people have with each other, like is happening now in Chile. There is kindness there, they listen to each other, they enjoy each other’s company, and they are not forcing things. As a matter of fact they are helping each other. And there is a general feeling of lightness and joy.

One could also recognise one landscape from the other by what objects we feel attached to. For example, some people feel it is important to have a relation with the famous and powerful. Well, that belongs to the old landscape. In the new one that interest is unlikely to be there.

Most of the things that we feel are extremely important today, like money and prestige have created the cult of Mammon where money is a much higher value than the human being. This religion of Mammon belongs of course to the old landscape.

In this aspect the younger generation somehow has the advantage of not being as taken by the objects of the old landscape. For example, they don’t believe in politics. On the other hand they, like others, don’t know where they are going or even where all this change came from. 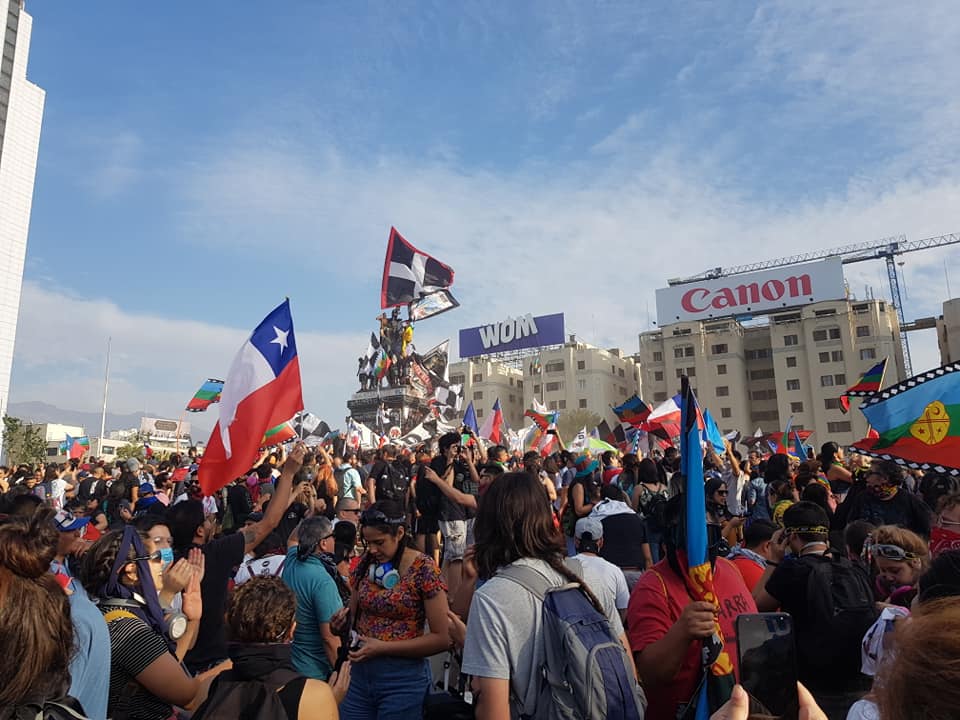 In Chile, the system seemed quite strong, that is, the old landscape was dominant and there were no apparent indicators of something new and strong appearing.

Yet, appear it did with all the positive things that the new landscape has brought forth.

For those of us outside of Chile it is most likely very difficult to imagine that in the next few years the waves of change will hit our shores.

And, just like in Chile, we will all at some point experience being in this gentle, strong wave that will engulf all of us.

Are there ways of strengthening the manifestation of this landscape?

Or some say, what should we do if we are in the middle of the manifestation of the new landscape?

(The following are suggestions for the rest of us who will experience the new landscape. They may or may not be useful for our friends in Chile who are already going through this wonderful process.)

To begin with, we should be aware of the process, where it comes from and where it is going. That should give us an indication of what to do.

People in Chile probably feel that what set off the process was that people suddenly had enough of the neoliberal system and that they said enough is enough. That seems a very reasonable conclusion but it doesn’t explain the spontaneity, the setting off a process without coordination, the endurance in spite of hardships and the exceptional positive and kind human climate.

We might therefore consider that it was a stronger force that set it off, something that is inside and around all of us, another dimension. Something that we have at times experienced when we suddenly felt part of everything.

It might also be useful to start seeing ourselves not as men or women or belonging to a certain group or nationality but just as humans.

There’s nothing wrong with having a good relationship with either a politician or someone who’s famous, etc. But to think that that’s going to make any difference is an illusion, a waste of time and energy. Perhaps one needs these politicians to open certain doors. That’s fine but they are not going to open doors to a new landscape, that’s not what they do.

It is very reasonable and understandable that when being in the new landscape and eyeing the possibility of a human future, like now in Chile, that most of our discussions would revolve around the components of that new and exciting future. Like, for example, education, health, and being able to earn a decent living. Also, discussing what kind of society we want, what kind of common rules or constitution we want.

That is great, but perhaps it would be useful that we also dedicate more time to the “real” thing, what we really are, what is our mission here. Spend some time on uprooting the fear and illuminating the future. If we don’t do that then the old fear comes back, with its compensations, with a modified, yet the same old landscape.

What if we are not there yet, in the dawning of this new liberating landscape? What should we do?

Basically more or less the same, except also trying to have an experience of this new landscape.

How do we do that? Undoubtedly there are many ways of doing that. One is an exercise that we presented in the latter part of a previous article here in Pressenza

Also we can try not to get fooled by the apparent strength of the system, because the system is just in people’s minds, it is not in its buildings.

If people don’t believe any longer in the system, then it will crumple, simple as that.

This change towards this new landscape will happen everywhere and if there are people in each place, all over the Planet, that understand this new beautiful process we can look forward to finally becoming humans.

Pressenza Iceland
News from the Pressenza Bureau in Iceland