Despite its enormous popularity, the East Side Gallery has been neglected, left to decay, and hacked into pieces, parts sold off and the rest declared a dead museum piece. This work of art and the symbol it represents for the non-violent overcoming of walls between people and the walls in their minds still lives on, for it resonates with us and our modern needs.

In November 1989, German artist Dave Monty was inspired by an illegal painting project on a piece of wall at Potsdamer Platz and launched the art project East Side Gallery. He found himself an assistant, Christine MacLean, a Scot living in Berlin. MacLean was passionate about the project from the very beginning and as she was most likely the only applicant, got the job which came with neither a works contract nor pay.

That passion for this unique open-air gallery still burns within her today, 30 years later. When Monty retired from the project a few months later, MacLean persevered and struggled on rightly earning her the unofficial title “Mother of the East Side Gallery”.

With the permission of the border guards who were responsible for the Wall at that time, Monty and MacLean called on artists in East and West Germany to come and paint the 1.3 km long section.

There was no selection procedure, everyone was free to paint. Racist or discriminatory images were naturally not allowed to be painted. However, such images were not submitted and did not correspond to the mood of the time. 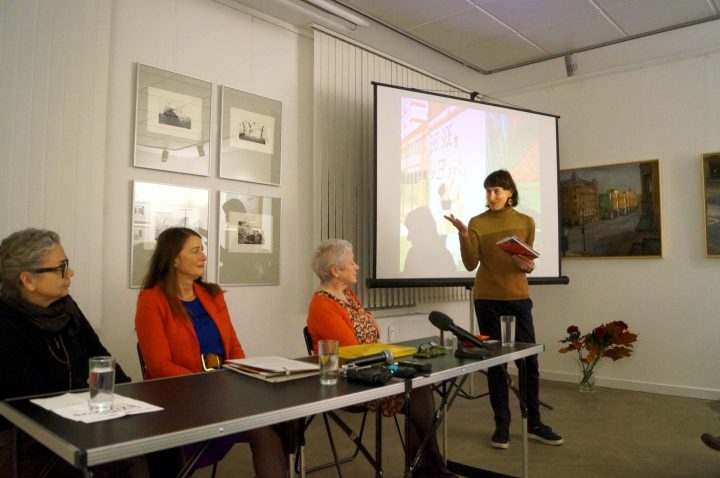 Two artists who painted at ESG, Teresa Casanueva and Sabine Kunz, sat next to MacLean and told their story at a discussion event on November 7 in the Inselgalerie. Another artist, Rosemarie Schinzler, sat in the audience. All three felt that it was a life-changing experience to have participated in this art project.

“The young artists got to know each other at the East Side Gallery and their youthful vitality formed an international community,” explained Sabine Kunz. You have to imagine that 115 artists came together in a very short time and created a 1.3 km long work of art. “Thoughts of freedom were in the air and hope of a new dawn perhaps,” Kunz concluded.

“The East Side Gallery is exactly the opposite of what this wall stood for,” Teresa Casanueva added. “Separation became connectedness, democracy and freedom. Some pictures warned or cautioned about the dangers of the future. It is the expression of this new era which is visible at the East Side Gallery, and not the past that no one wanted anymore,” Casanueva continued. 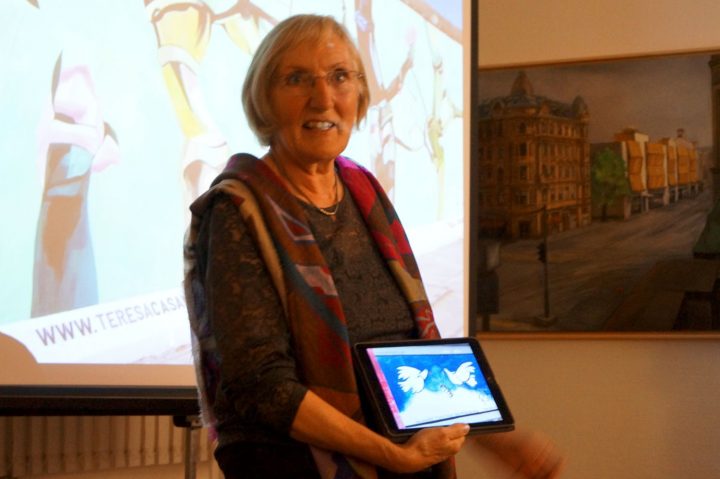 Rosemarie Schintzler presents her picture „Alles offen“ (Everything open)at the Berlin East Side Gallery. Two white doves hold the ends of a red thread in their beaks, on which the Brandenburg Gate hangs. (Image: Reto Thumiger, Pressenza)

The longest open-air gallery in the world is one of the most visited places in Germany. The Berlin Senate has allowed this piece of wall to deteriorate over the years, permitted plots of land to be sold between the Wall and the Spree, and missed opportunities to buy it back. Even a loud international protest in 2013 could not prevent the luxury residential tower “Living Levels” or the monstrous complex of hotel and luxury condominiums of investor Heskel Nathaniel (Trockland Management GmbH). Both construction projects were pushed through by the Berlin Senate against the will of the majority of Berliners, even though the Berlin Denkmalschutzgesetz (Monuments and Historic Buildings Act) actually prohibits any new building if it would encroach upon the sensitivity and effective area of a historic monument. Originally, a total of 24 wall segments, i.e. approx. 3.5 pictures, were to be pulled out of the East Side Gallery, which once again shows that laws in Berlin do not apply equally to everyone. Tired of the discussion and protests about this unpleasant piece of remembrance culture, the parts of the site that had not been flogged off were transferred seamlessly to the “Stiftung Berliner Mauer” (Berlin Wall Foundation).

Some readers will perhaps at this point shrug their shoulders in resignation in view of the masses of Selfie-taking tourists.

Teresa Casanueva’s artwork after its completion (above).This wall segment was sold together with its plot to Trockland Management GmbH. The picture below shows the current state of the “historically preserved” work of art. (Images: © Teresa Casanueva)

The East Side Gallery stands for a culture of remembrance that reminds us of the “afterwards”; of euphoric days of self-conquered freedom, and not of the “before”; of land-mined no man’s land. To my knowledge, it is the only memorial in Berlin that stands for transformation. Not simply as a memorial to the crimes and sufferings of the past, but to the overcoming of oppression and suffering. It is a piece of wall that originally stood for subjugation and oppression and has turned itself into a symbol for the opposite, freedom, awakening, democracy and hope. Something that only art and the creativity of people can achieve. That is why the ESG is so unique and worth protecting, to keep alive the spirit and transformative power that we need today more than ever.

Although the “Stiftung Berliner Mauer” will make a better effort to maintain the gallery than the Berlin Senate it will also transform it into a dead museum piece where only restorers are allowed to lay their hands on it.

At the end of the evening in the Inselgalerie, through which Kathrin Schrader led with great sensitivity, Christine MacLean expressed the following:

“The Berlin Wall Foundation is an institution and it is very restricting. The ESG is unique and thus does not fit into the narrow definitions of the current monument protection laws. You could call it street art because it was art on the street, but it really isn’t, because street art is fleeting and only temporary. The ESG does not fit into any category and requires another solution that has not yet been found. In my opinion, the best solution would be a Monument to Joy. Joy, delight, was the feeling that everyone felt at that moment. And how many monuments to joy are there in the world? Isn’t it more ethical to spread joy than horror and terror?” 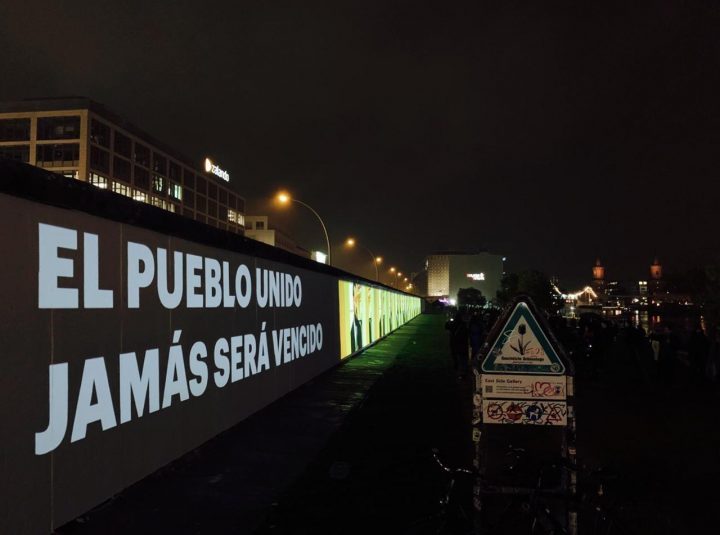 Projection on the back of the East Side Gallery in solidarity with the protest movement in Chile and against the brutal repression by the Piñera government. (Image: Maga Navarette, Pressenza)

Politicians and institutions who want to maintain the status quo are rightly afraid of the sense of joy that can awaken the masses from their resignation and make them walk the streets, non-violently and creatively shake the foundation of the destructive and oppressive system which benefits a small minority, and continue the search for a better and more humane world.

Just because we don’t know the exact route doesn’t mean this new, more human world doesn’t exist. And the East Side Gallery reminds us of that with its paintings.

More articles about the East Side Gallery at Pressenza