On December 5, more than a hundred women took to the Brooklyn Bridge where they danced and sang, El Violador Eres Tú (The Rapist Is You). This is the world-renowned song by the Chilean group Las Tesis, which calls on macho society to demand women’s rights. We spoke with Loly Bonilla, one of the participants and organizers of the event. 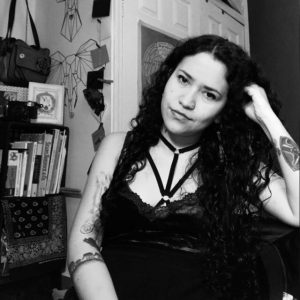 JS: Tell me about yourself and how you got involved in activism?

Hello, my name is Loly Bonilla. I’m a tattooist and photographer. I currently live in New York City, which has hosted me for the past six years, and I am a member of the Barrio Collective.

I got involved in feminist activism through music in Bogota, Colombia. There, my friends and I created bands made up of solely women to play Metal and Hardcore. In this way, we opened spaces for women since these musical genres are really sexist. It was a difficult path because of the bullying, closed doors, and radical machismo. These obstacles made us stay stronger and united to be able to achieve spaces in concerts where there had never been women bands. We were subversive in macho spaces, using the songs as a way to send a clear, feminist message.

JS: Why is this song important to you?

“Un violador en tu camino” has been a strong, transgressive song. Thanks to this, the world in one way has opened its eyes and realized that today, in the twenty-first-century, violence against women continues to occur. It seems crazy, but many people, from the comfort of their homes, do not know about the hatred resulting in feminicides still happening in the world. And this song, thanks to Las Tesis (Chilean feminist group and creators of the song), has sent the message across the globe.

JS: Do you think the song gives momentum to the #MeToo movement in Latin America?

Of course, we can feel comfortable and safe telling our stories. Because there haven’t been one hundred women who have been harassed or raped; there have been millions of us.

JS: Some people criticize the song on the grounds that it creates a battle between the sexes. What do you think about it?

The battle of the sexes has always remained in their minds of many. It will exist because, for many, it is difficult to find a balance.

I don’t think the song wants to create a battle between the sexes. We may have a solely women performance, chanting, “the oppressive State is a male rapist.” I think that this also applies to every person on this planet where wars, politics, and the State don’t respect life. Just like a rapist does not respect anything.

In the performance that we did here in New York, many male friends accompanied and supported us. Moreover, if men wanted to participate, they were welcome; we are not going to close the doors to them; the idea is to find the respect to achieve humanism.

JS: Are there any more events to which you would like to invite the public? A link to visit?

We’re working on creating safe spaces for art and music with the community, so we can share with each other because this is what makes us stronger.

You can follow us on Instagram @barriocollectivebk, where we will inform you about future events in New York.