As reported by The Guardian “Turkish troops have advanced into north-eastern Syria, following airstrikes and artillery barrages aimed at US-backed Kurdish forces who control the region.

”The Turkish military confirmed on Wednesday it had “launched the land operation into the east of the Euphrates river” and later said it had hit 181 “militant targets”.

“Video footage showed civilians fleeing towns with columns of smoke rising in the background and jet trails visible in the sky.

“Activists and observers said at least seven civilians had been killed so far. There were also early reports of civilian casualties in border towns hit by shelling. Pictures and video shared on social media showed wrecked buildings and bodies in the rubble.

‘Turkey’s offensive was triggered by a call between Donald Trump and Turkey’s president, Recep Tayyip Erdoğan, on Sunday, in which, the Turks claim, Trump handed over leadership of the campaign against Isis in Syria to Ankara. The American president announced on Sunday night that US troops would withdraw from the region.” 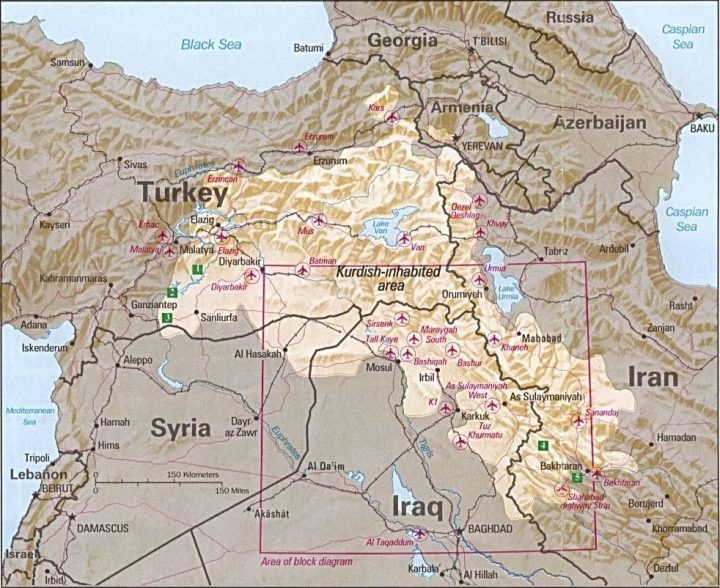 Kurdish-inhabited areas in 1992 according to the CIA

There is uproar in the international community and also in the US about this decision that leaves the Kurds that fought and defeated ISIL, losing 11000 of their own people at the (lack of) mercy of Turkey, risking a reboot of ISIL’s fighters in camps controlled by the Kurds and the complete destabilisation of one of the few functioning areas of Syria with the ensuing movement of new refugees.

Trump “justified” not protecting the Kurds because they didn’t come to help the US in Normandy during WWII. Whist we are by now used to his outrageous comments in order to create smokescreens to cover even more outrageous actions, we must look deeper into this one as most media are not really mentioning who are the Rojava’s Kurds and what is their project.

An experiment in green Democracy and co-operative feminism

“The Autonomous Administration of North and East Syria (NES), often referred to as Rojava, is a de facto autonomous region in northeastern Syria…Northeastern Syria is polyethnic and home to sizeable ethnic Kurdish, Arab and Assyrian populations, with smaller communities of ethnic Turkmen, Armenians and Circassians. The supporters of the region argue that it is an officially secular polity with direct democratic ambitions based on a libertarian socialist ideology promoting decentralization, gender equality, environmental sustainability and pluralistic tolerance for religious, cultural and political diversity, and that these values are mirrored in its constitution, society, and politics…” (Wikipedia)

Its economy is based on Co-operatives and it has given priority to education, human rights and democratic institutions working from the social base.

It is not surprising then that this little oasis of people determined not to lose their territory to ISIL’s caliphate, the Syrian war, neoliberalism and ethnic oblivion under Turkey’s rule has been left to their own devices, betrayed by the US (always a dangerous ally that used and abused them) but also neglected by Syria and Russia, and now facing annihilation and the destruction of their dream.

Their voices should not be silenced.