Recently a party represented in the German parliament (Bundestag) published its program for the military. The program is not secret. The voters going to the polls in 2 German states on September 1 could know this program. Up to 28 percent of the voters have chosen the party with this program. It wants to further militarize Germany.

The 28 percent party is calling for a radical “restoration of the German Bundeswehr.” The military draft should be reinstated and the number of troops “be raised to 23,000 soldiers” – as a “first step.” An additional 50,000 man reserves would be necessary. The German military, it literally states, “would be authorized to intervene domestically.”

The “foreign duties” of the Bundeswehr should be exercised “in every corner of the earth.” In Europe: it lays “claim to a military commanding role” – because of “Germany’s geographic situation and economic prominence.” The highest command level will be a German “General Staff.”

Germany should also be in command of the European NATO.

And finally, being the commanding nation, Germany must insist on “participation” in NATO’s “nuclear capabilities.” In other words, Berlin should have a finger on the trigger of France’s, and eventually also the USA’s nuclear weapons and be in a position to wage also NATO’s nuclear wars.

The radical nucleus of these plans is not covered by Germany’s constitution. A renewal of a German “General Staff” was forbidden in 1945. However, that is not the most important aspect.

Most important is the fact that this is the elaboration of measures that Berlin has long since put into practice or has been seriously contemplating.

A conservative German weekly wrote that “many” in Berlin are “obsessed” with “the idea of a German leadership role – in the European Union, in Europe, and even in the world.”

The German military and the “domestic” arms industry dominate continental military policy. Today, no EU country, with the exception of France, is capable of fending off a military aggression against its territory without the help of German military policy – leaving aside the fact that Germany, itself, would be the aggressor, which is already contemplated in the military program of the 28 percent party quoted above.

For the program literally states, the Bundeswehr should not only assume its “foreign duties” “in every corner of the earth;” but should be engaged across foreign borders – even “against the will of other countries”.

Doesn’t this seem like wild fantasies, and that is right, you better not draw the logical conclusions.

But, why would a country, like today’s Germany, one that is allegedly surrounded only by friends, and is threatened at none of its national borders, militarize its foreign policy to such a radical extent? Radical? Yes. It is no joke, that today’s German Defense Minister – along with the German Chancellor – favors the acquisition of its own aircraft carrier, of course together with France.(…) Paris is always good as a vanguard against the fears of German militarism.

What is the point of a German “protection mission” in the Persian Gulf (together “with France”)? What is the German navy looking for off the coast of China (eventually “with France”)? Why is the Bundeswehr preparing for “winter combat”‘ in the Arctic (also without France)?

German military policy is seeking a great power capability. This is meant seriously, and is favored by a parliamentary majority in Berlin. The military program quoted above seeks to give focus to this consensus and up the ante. It is accompanying the militarization of Germany’s foreign policy with a perky orchestra, a bit too loud, somewhat shrill, but reading from the same page of notes.

Still in 1990, the western world war victors were pushing back against the nightmare of a unified Germany that could, once again, use its economic might for military purposes. However, by then, it was too late. The Federal Republic of Germany, the battering ram against the East, was standing on an open field when the wall came down. The shopping spree throughout Europe, first in the east, then also in the west, resembled a delirium. Today, German soldiers are everywhere, where the “chain of value creation” has to be kept intact – if necessary, even “against the will of other nations,” as the quoted military program describes.

In the battle for nature and its remaining resources, the world’s fourth largest economic power steps up to the next level toward military backup. The higher it rises, the deeper the fall. 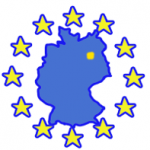