On 25 and 26 June, a conference was held in Manama, Bahrain, at which the economic component of the “Deal of the Century”, entitled “Peace for Prosperity”, was officially presented as a proposal for a peaceful solution to the Middle East conflict.

The “Deal of the Century,” which the U.S. government has been planning for a year and which has undoubtedly attracted the interest of the international community, reports an investment of $50 billion in the Palestinian territories of Gaza and the West Bank. The agreement promises economic prosperity for Palestinians with infrastructure projects, including water, energy, telecommunications, tourism and medical facilities.

It should be noted that the conference, being an economic laboratory, will deal primarily with state enterprises and finance ministers. And while Israel looked forward to the conference and sought the best possible representation at the level of economic experts, the Palestinian Authority rejected the invitation and decided to abstain.

Why did the Palestinian Authority decide to abstain from participating in the Bahrain Conference?

Pressenza Greece visited these days, along with other journalists and academics, the West Bank administered by Palestine. We had the opportunity to meet and discuss with students and other Palestinian citizens, but also with officials of the Palestinian Authority who explained to us why they rejected the proposal of the United States government. Palestine will refrain from participating in the Bahrain Conference and invites other states to do the same.

Mahmoud Al-Alul, vice-chairman of the Fatah Central Committee, said: “This proposal is not acceptable, because we do not even participate in its constitution. The implementation of international peace treaties, such as the 1967 United Nations Resolution 242 and the 1993 and 1995 Oslo Accords, is the basis for a peaceful solution to the Palestinian conflict.

In response to those who maintain that Palestine should have participated in the Conference with the aim of being able to negotiate the political part of the proposal that will be presented after September, once the Israeli national elections are over, Nabil Shaath, international relations advisor to the Palestinian Authority of President Mahmoud Abbas, said: “Our problem is political and the so far pro-Israeli attitude of the Trump government and its actions has already revealed the political part of the proposal. President Trump not only has a solution to our problem, but he also destroys all the parameters we have agreed on regarding peace:

(1) Recognise that Jerusalem is the capital of Israel and move the American embassy to this city;

(2) Claims that there are only 42,350 Palestinian refugees, which brings them back to a minor problem, compared to a UN survey of some 5.5 million people;

(3) Considers that Israeli settlements in the Palestinian territories do not constitute an obstacle to peace and;

(4) Considers that our territories are not occupied by Israel.

We asked Nabil Shaath if he believes that the “Deal of the Century” will be supported and if the Palestinians feel directly threatened, he replied: “The whole world is tired of the control of the United States. The world continues to change and form a multipolar dynamic. Today, Europe, China, Russia and South Africa are working to form a multipolar world. 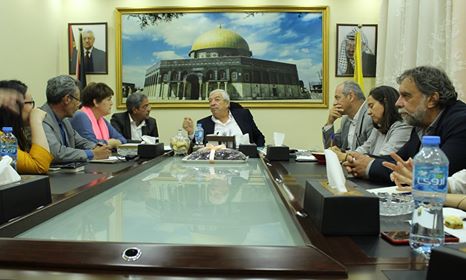 Meeting with Fatah members in the West Bank, photo Pressenza.

As of 24/06, all Arab countries had confirmed their attendance at the conference. According to the Middle East Monitor, Sabaday Savit, former leader of Mossad, told Maariv (Israeli newspaper) that if the Israeli government wanted a peace plan, it would discuss it in economic terms and in terms of beneficial public investment for both sides. “Netanyahu refuses to negotiate with the Palestinian Authority, he is the only Israeli leader who has not negotiated in years because he is threatened by the Israeli right and fears that, if he starts negotiations, he will be lynched in the main square. Regarding the Oslo agreement, invoked by the Palestinian Authority, Savit said the extreme right had transformed the agreement into a kind of “sin”.

Translation from Spanish by Pressenza London