It has been an intense few days of events about migration on the Balkan route. It starts on Wednesday the 15th of May with the opening of the exhibition ‘Refugee journeys through the Balkan route(s): a crisis no more?” in the Cortile Farmacia of the University of Milan. By the evening of Thursday, more than 200 people had visited the exhibition, (arriving at a total of 300 Friday afternoon), talking with the academics from the IR_Aesthetics project who carried out the research and authored the photographs as well as the students of Fuori Luogo and the volunteers of Opet Bosna. Many visitors leave comments and messages of appreciation as they leave the event. There is a warm and informal atmosphere, enclosed in the beautiful setting of the colonnades of the old cloister and the ‘Refugees Welcome’ banner which closes the sequence of photos and explanatory panels. 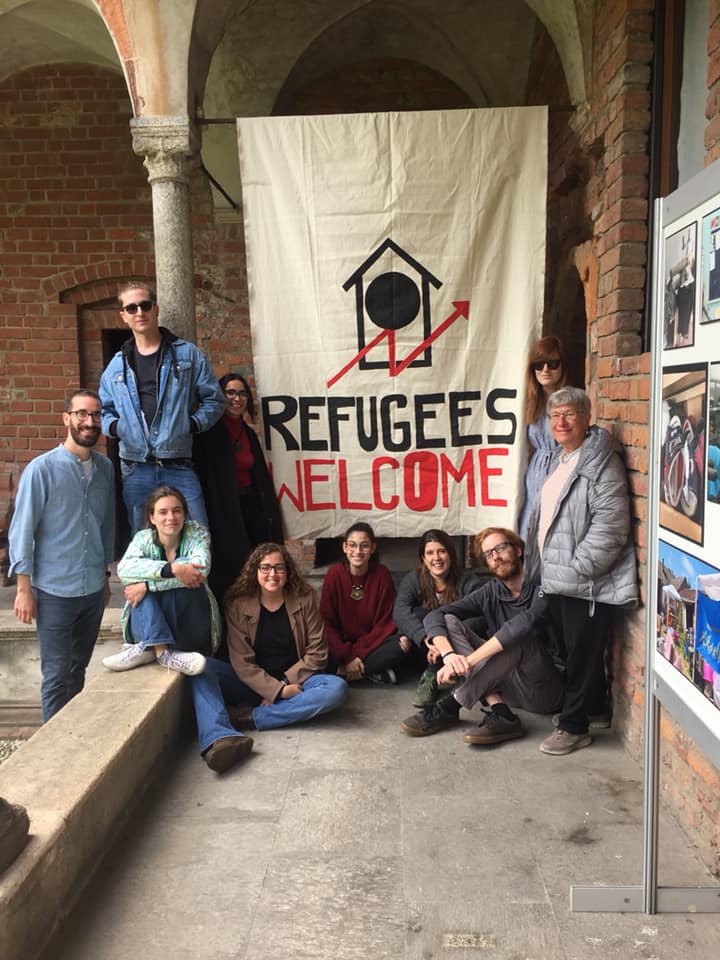 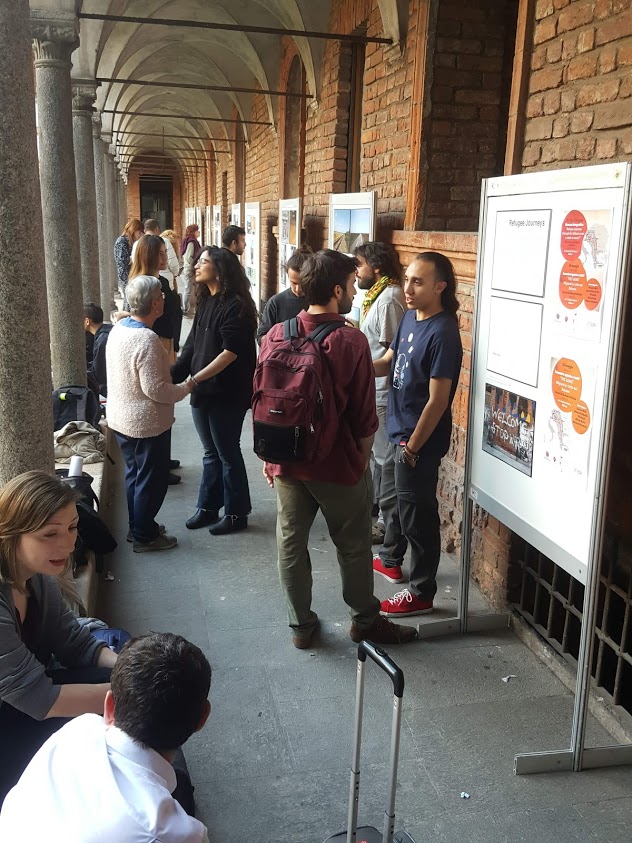 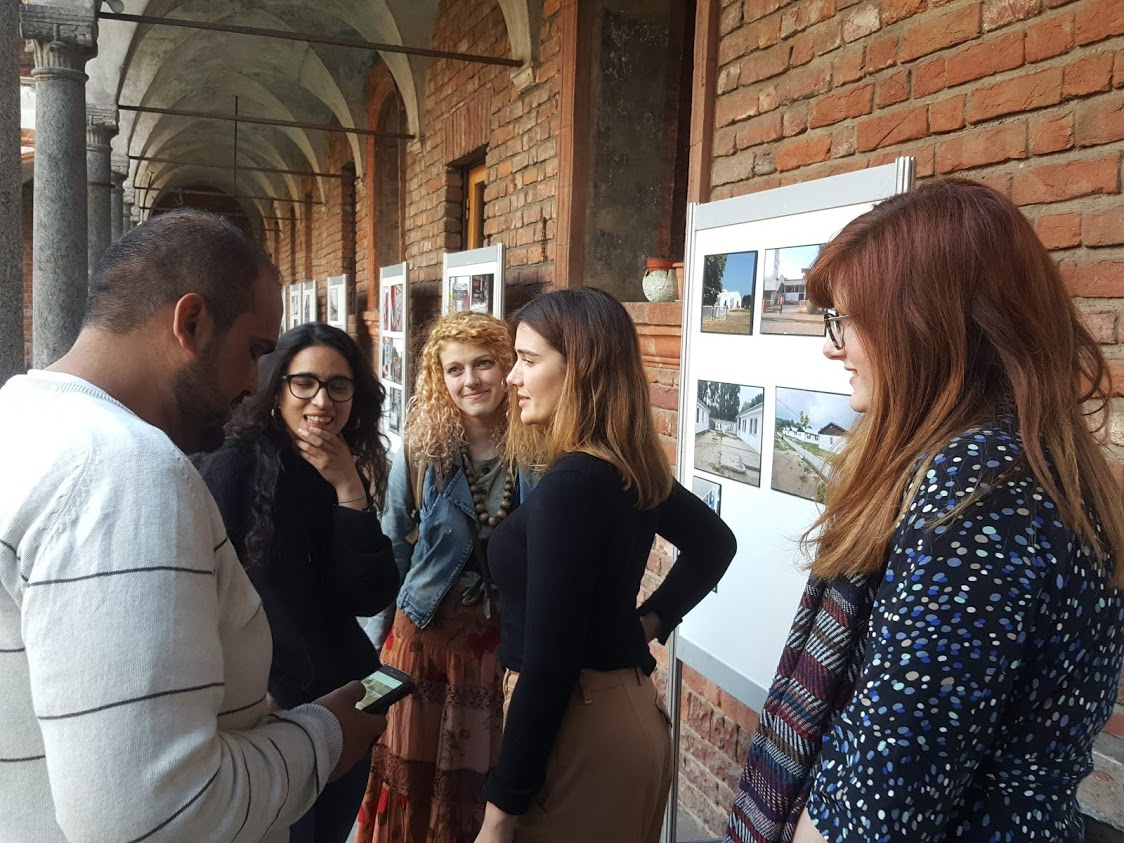 The exhibition is composed of strong images – roads and railway tracks that were travelled by thousands of migrants and now stand deserted after the borders were closed, precarious housing in camps across Greece, squatted buildings and writings of condemnation and solidarity on the walls of Athens. All of this testifies to the dramatic and often forgotten situation along the Balkan route, which was at the heart of the fieldwork research carried out by the academics that worked on the IR_Aesthetics project (Amanda Russell Beattie, Jelena Obradovic-Wochnik and Patrycja Rozbicka from Aston University and Gemma Bird from the University of Liverpool). 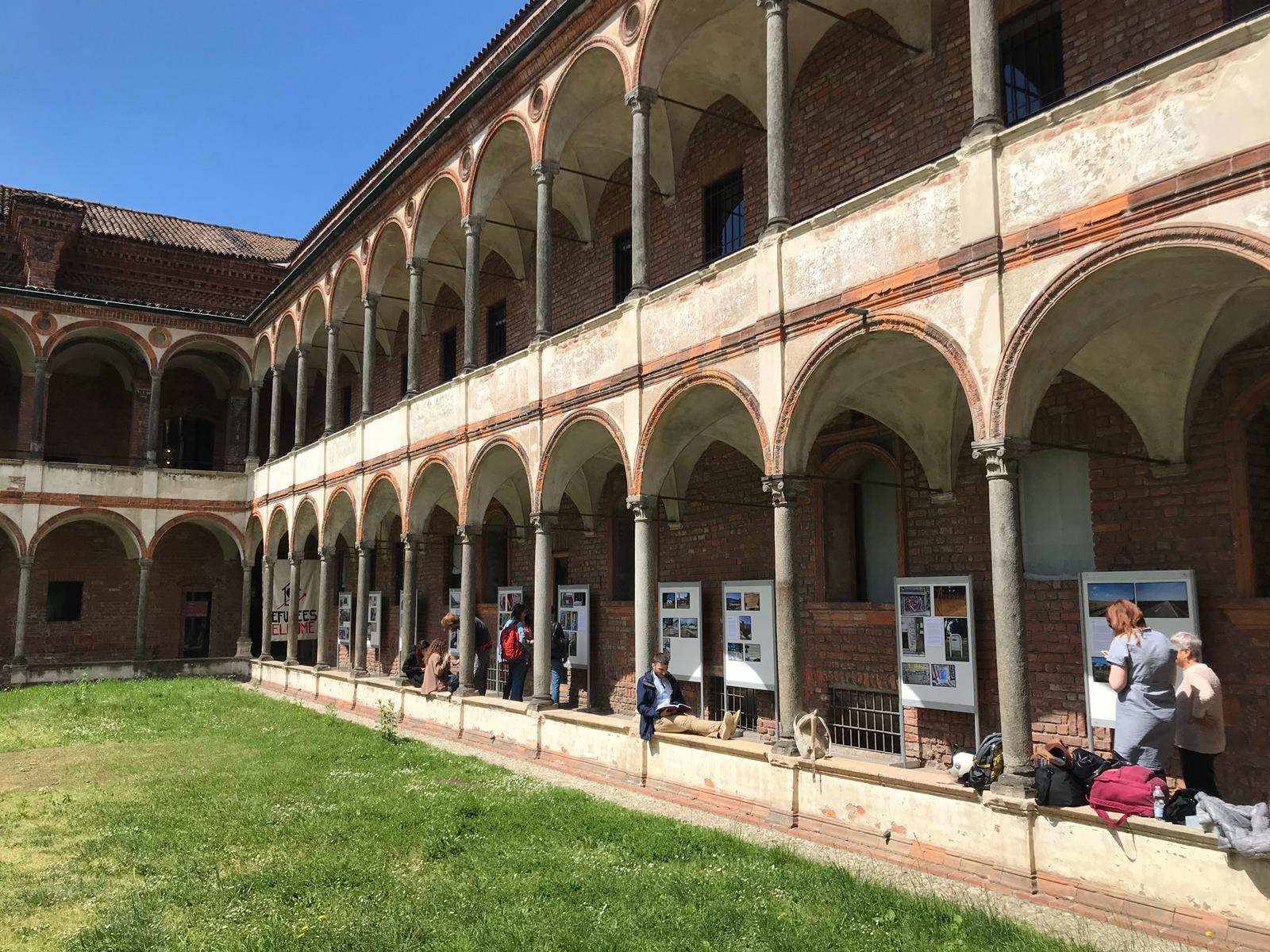 In the afternoon of Thursday the 16th, an open event takes place in the Faculty of Political Science in via Conservatorio, titled “The Game: the journey of migrants along the Balkan route”. The room is full, the public is attentive and engaged. The introduction by Sara Kharboui of Fuori Luogo goes to the heart of the matter, reminding the audience of the enormous disparities between Global North and Global South that drive people to migrate towards a “Fortress Europe” which rejects them and does not offer any channels of legal access. A criminal and useless policy, given that even by militarising and closing borders, a global phenomenon such as immigration will not stop. 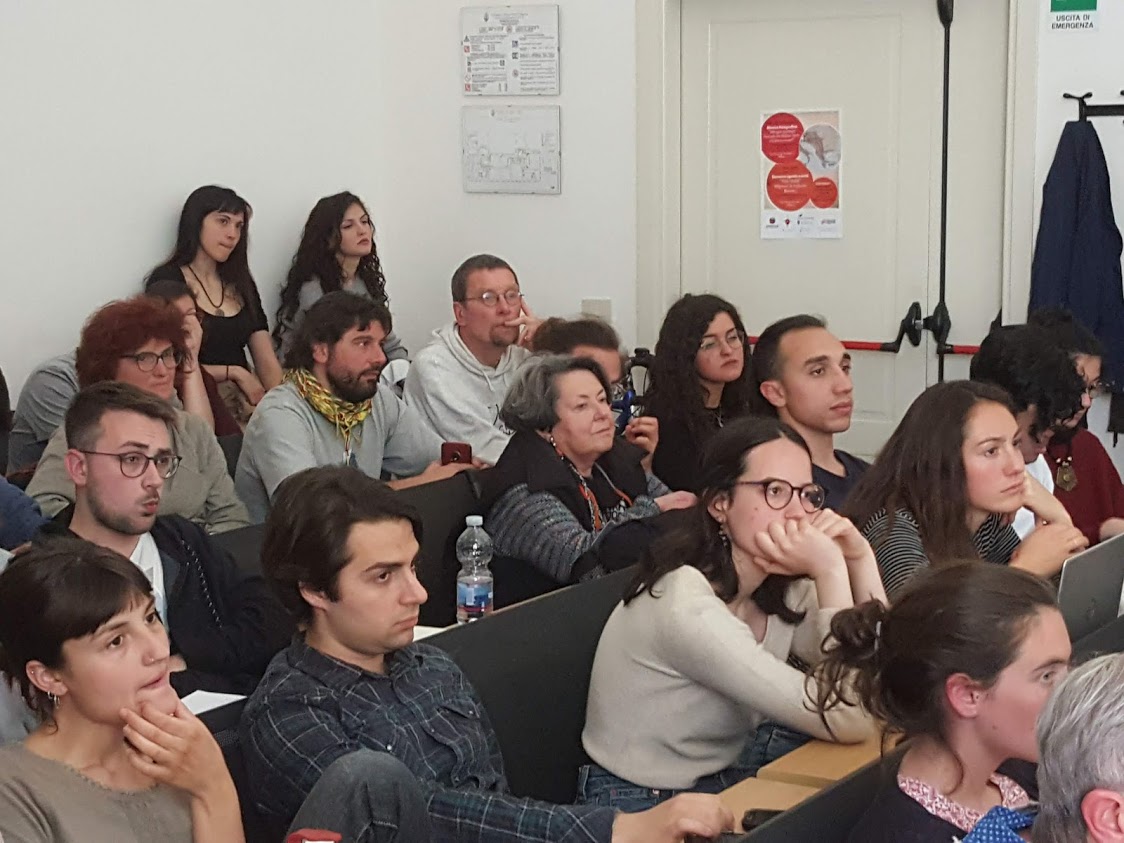 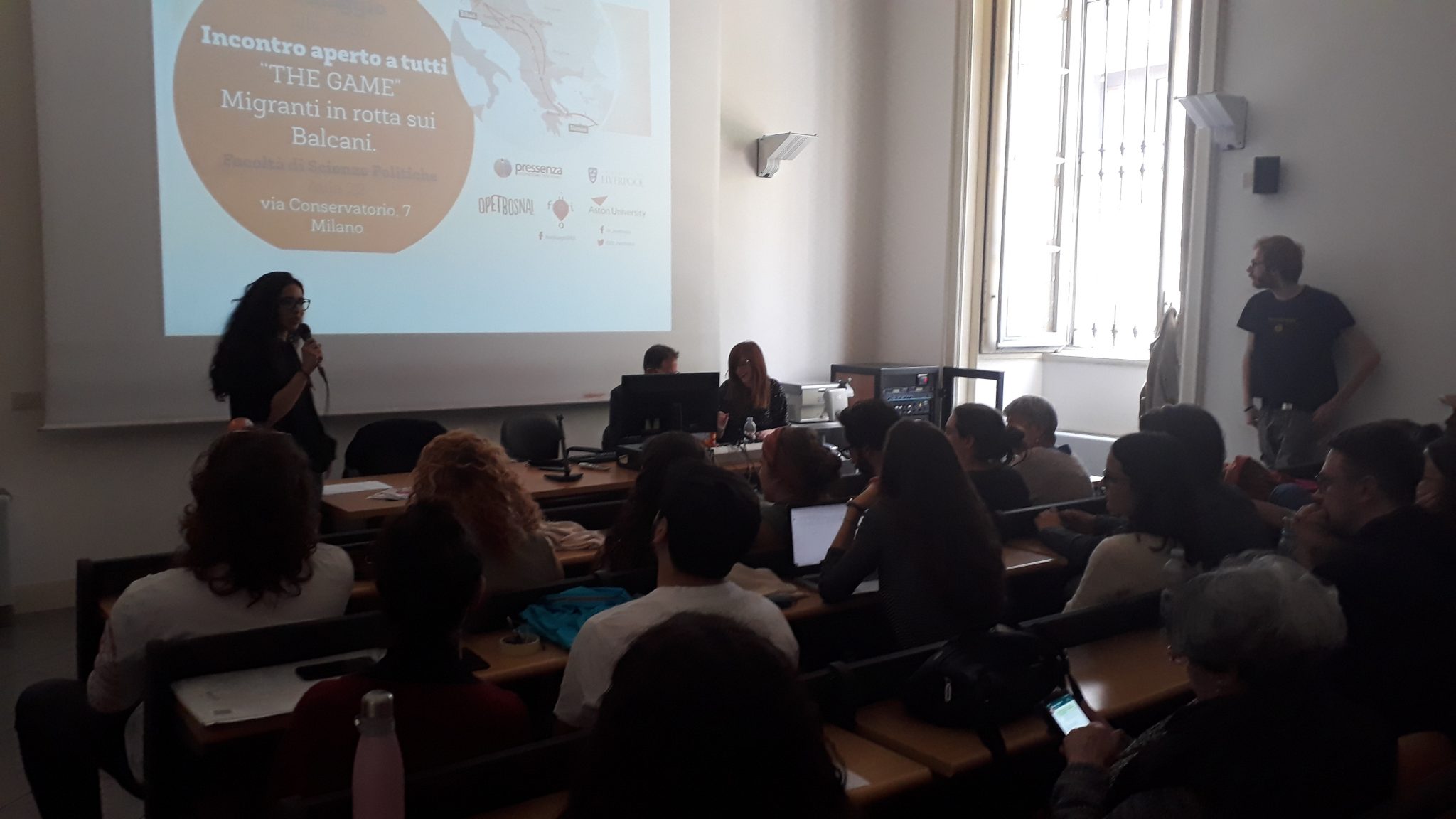 Next is Michele Maldolfo of Opet Bosna, who explains what “the game” is which gives the title to the event. It is not a game, but an unfair struggle between the defenceless migrants (often families with kids) who try to reach Europe, on the one hand, and the armed police, barbed wire and the walls seeking to stop them, on the other. It is a confrontation that repeats time and time again, with failed attempts and pushbacks, and extends from Greece to the border between Italy and France. In addition to the many episodes of police brutality reported by NGOs on the ground, migrants have to deal with the dangerous conditions in the overpopulated camps that “house” them and often have to seek refuge in abandoned buildings, in the long and exhausting wait for the recognition of their refugee status. It is a terrible, psychological violence, which adds to the physical violence of beatings and broken or stolen phones.

It is not only a question of inhumane and disastrous management of immigration, but also, more generally, of discrimination on the basis of place of birth: a young European can travel freely and take advantage of opportunities denied to his peers from other countries.

Gemma Bird, Lecturer at the University of Liverpool, describes the project she has been involved in together with her colleagues, focusing in particular on the situation on the Greek islands. In 2014, the average stay in a camp on Samos, Lesvos and Chios used to be three days, while today the wait before migrants know their fate can be as long as two years. The situation here as well is defined by overcrowded camps, violence, long queues to receive food, insufficient facilities and people for whom Greece was only a transit country, but who now find themselves stuck in a situation of limbo and uncertainty about the future. As is the case in Bosnia, in Greece as well there are activists and NGOs who help migrants by providing services and many forms of help, such as food, clothing and language courses, but the humanitarian crisis continues. This is the result of a policy of externalisation of borders, whereby refugee camps which were meant to be temporary become permanent. Despite the denunciations, little or nothing has changed about the situation.

Jelena Obradovic-Wochnik, Senior Lecturer at Aston University, adds data and information on the long and tortuous path as well as the high cost (up to €4’000 per person) faced by those that journey along the Balkan route and have to rely on human traffickers. Every time migrants have to cross a border, they have to pay someone and sometimes have to become traffickers themselves, so they can afford the journey. The recent proposal to expand the remit of Frontex, including the use of force in border control is a worrying indicator and a sign that greater political pressure, alone, can force a change in direction in European migration policy.

Questions from the audience allow Mirko Rozzi of Opet Bosna to talk about the experience gathered across the many trips in the refugee camps in Bihać and Velika Kladuša, the two Bosnian towns that lie closest to the border with Croatia, as well as of the services offered thanks also to the solidarity of the local population: meals, showers, clothing and first aid for migrants that were beaten up and pushed back by the Croatian police.

Asked by a student, Jelena Obradovic-Wochnik speaks about solidarity and self-organisation, citing the squats in Greece where activists, locals and migrants themselves organise as an alternative to the official camps. Some of these occupied spaces have a good reputation, others less so. Many have been evicted, or risk eviction, while others are left alone. At least, there, people can move freely and are not subject to the terrible conditions that characterise the camps on the Greek islands.

Gemma Bird lists the policy recommendations that the team has formulated in light of their fieldwork research: more transfers from the Greek islands to the mainland, more resources for alternative housing, faster and more transparent procedures on asylum permits, greater communication with solidarity movements. These are just some of the proposals that have already been submitted to politicians and institutions in various European countries.

Michele Mondolfo adds that there is a need to fight against misinformation, hate and widespread egoism as well as to give a positive image of migration. He recalls the widespread fears about the Albanian “invasion” that circulated in Italy 25 years, which proved to be completely unfounded. He cites some positive news: after a ruling by the European Court of Justice, if a refugee’s life is at risk in their country of origin, then they cannot be expelled; another encouraging sign is that the accusation of human trafficking levelled against the NGO Open Arms has been dismissed. He calls for support for the activities of Opet Bosna, by participating in their travels or offering other forms of help.

A concluding intervention by a student from Fuori Luogo reminds the audience of the ‘security bis’ decree which was recently proposed by the Minister of the Interior Matteo Salvini. This decree shows the clear intention of attacking the NGOs that try to save lives in the Mediterranean, as well as other forms of dissent. The criminalisation of solidarity is not stopping, so those who oppose these inhuman choices can’t stop either. 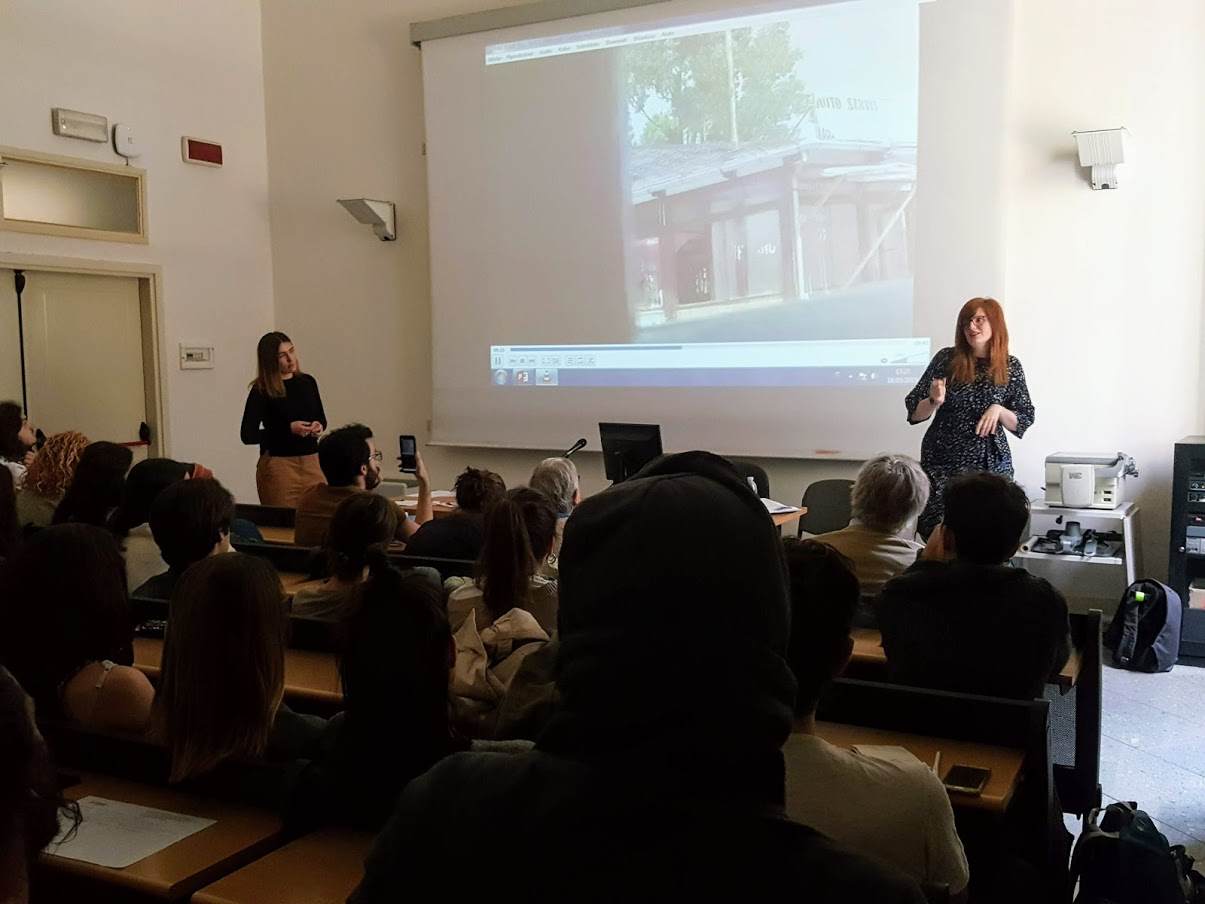