The Madhya Nisheda Andolana-Karnataka is a Padayatra (nonviolent march), the largest of its kind. More than 4000 women from twenty-three districts of the Karnataka State, India, embarked on a twelve-day walk of 210 kilometers from Chitradurga to Bengaluru, protesting against the State’s policy of legal liquor sales. The march was held under the banner ‘Beer Beda Neer Beku’ by Madya Nisheda Andolana (MNA), an organization working towards prohibition in Karnataka. 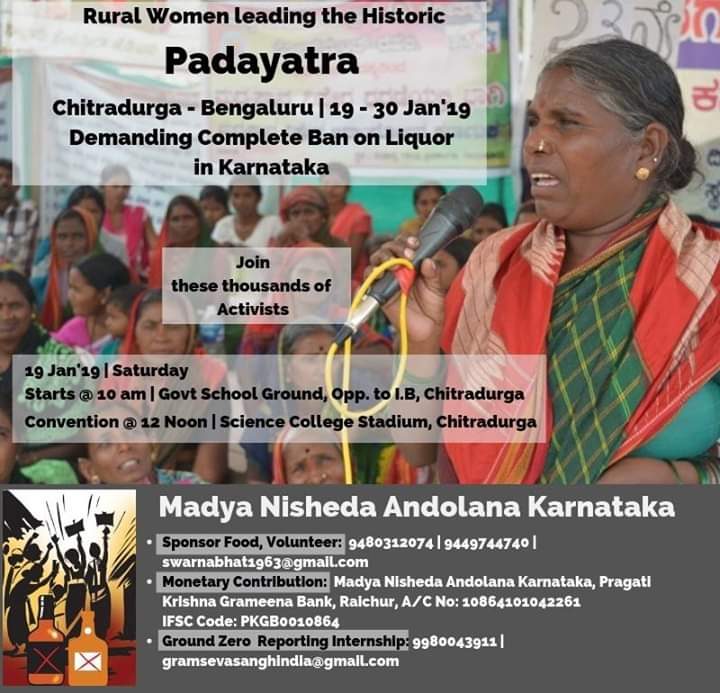 “We began the march on January 19 and we have held several public interactions along the route from Chitradurga to Bengaluru. We want to highlight the bad influence of liquor in the everyday lives of people and are asking for an immediate ban on liquor. We are not associated with any political party,” says an activist working with the movement.

The women have been holding public meetings in the villages they pass through along the way, where they create awareness among women about the ill-effects of alcohol. 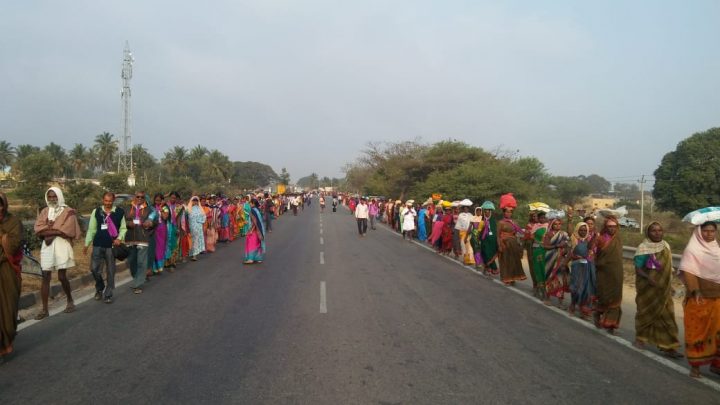 The rise of alcohol-related violence and associated poverty is one of the driving reasons these women braved the blazing heat and searing cold, to walk to Bengaluru to demand a total liquor ban in the state. Various drastic degrading lifestyle changes can be observed in the consumption of liquor, legal and illegal. Violence and conflict within families is the familiar story one hears during the March.

The Padayatra aims to bring close attention to the State’s neglect of Article 47 of The Constitution of India which, being one of the Directive Principles, directs the State to raise the level of nutrition and the standard of living and. to improve public health as among its primary duties; in particular, the State shall endeavor to bring about the prohibition of intoxicating drinks and drugs which are injurious to health.

The State claims that the revenue from the liquor industry, which has increased from 9,000 crores to 18,000 crores, is being used to fund social-welfare development programs. This policy has been rejected completely on ethical grounds by the women of the Madhya Nisheda Andolana – Karnataka. The women of the march want to emphasize their role not only as a political pressure group but as a major vote bank; thereby raising their voices to demand focus on development and the welfare needs of the people.

Sadly, in Madya Nishedha Andolana Padayatra, a landless labor woman activist, “Renukamma”, from Kairavadagi, ligasaguru died when a vehicle hit her on the highway. The incident further highlighted the government’s negligence towards these women. With intense emotion, the Padayatris marched towards the Nelamangala Hospital to give her martyrdom a tribute.

The Karnataka rural women’s long march for liquor ban reached Bangalore January 30th, 2019, Martyr’s Day. The marchers arrived at Vidhana Soudha, unified under the banner of MNR and conducted a peaceful sit-in protest.
Mokshamma from Raichur, representing the women, pointed out that due to rampant liquor sales including unlicensed vending, violence against women is on the increase. Hard-gained earnings of many households are lost to alcohol. “We women represent half of the voters of the state and are placing our legitimate demand squarely in front of this government. This is about peaceful and healthy lives for all. It is time that this government took this important step and banned liquor in the state”, she said.

The Andolana aired three main demands – a complete liquor ban in the state, compensation to the victim households (for losing breadwinners to liquor for those who are undergoing treatment as well as for victims of drunken driving road accidents); and, lastly, empowerment to Grama Sabha’s as per 73rd and 74th Amendments of the Constitution of India to be able to prohibit sales of liquor in their jurisdiction, in a manner that the Excise Department cannot bypass this authority of the local government.

Swarna Bhat of Grameena Kooli Karmikara Sanghatane emphatically pointed out that it is the responsibility of the government to ban liquor. Citing Article 47 of the Directive Principles of the Constitution, she reminded that the “State has a responsibility to endeavor to bring about the prohibition of intoxicating drinks and drugs”.
VidyaPatil, representing the Andolana, said, “Not a single political party has so far responded to the women’s justified demand. This is completely unacceptable and surely, they will face the ire of the women of the state in the upcoming elections, if their demand is not supported and met”. She explained that even little children are taking to liquor these days and getting addicted, ruining their future and their lives.

Before beginning their current padayatra, during the Belgaum Winter Session, a delegation of the Andolana had met with the Chief Minister and submitted a memorandum. Organizers of the struggle expressed deep disappointment with the Chief Minister’s response, and his insensitive remarks around the demands of the women as well as with regard to the accidental death of Renukamma, one of the protestors, during the padayatra.

Here are some photos of the twelve-day March, a testament to the resolve of women to end alcohol-related violence. 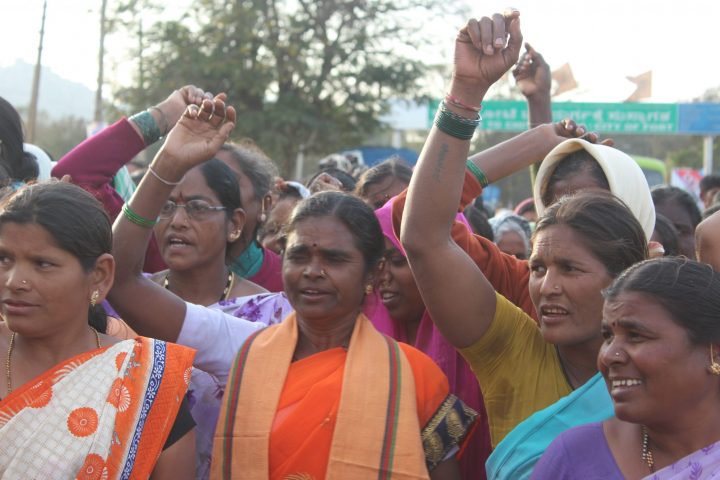 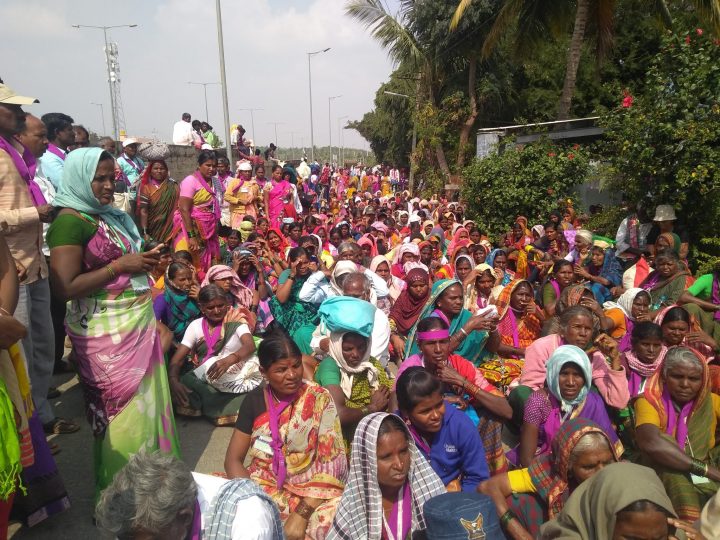 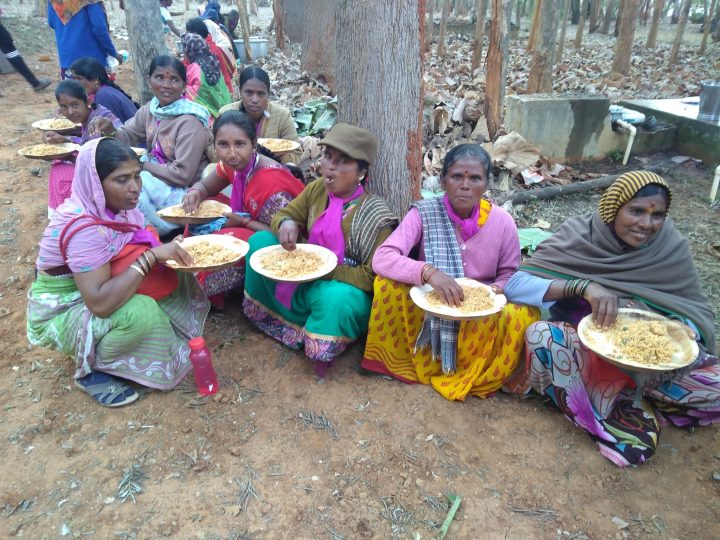 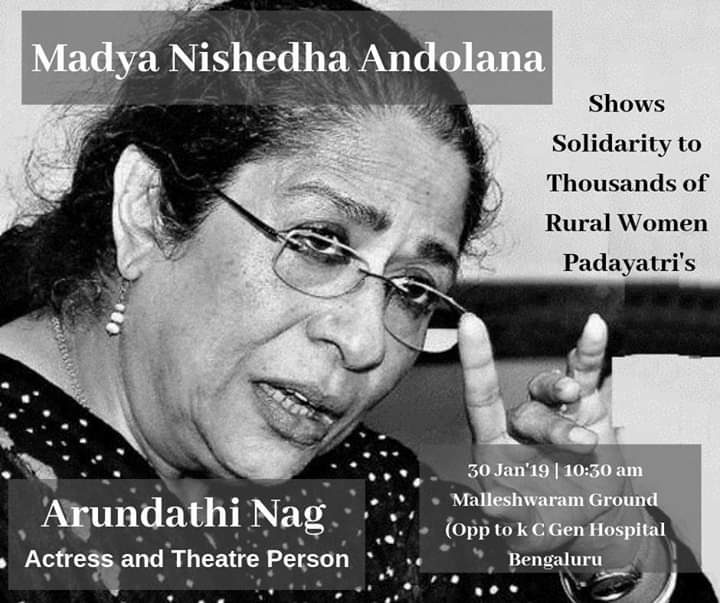