It is still too early to call Jair Bolsonaro president, because this election was the biggest farce in Brazilian history, starting with the mountain of irregularities in electoral propaganda, which has not yet been evaluated by the TSE (Superior Electoral Tribunal).

The TSE has to explain to the Brazilian population why it did not annul Bolsonaro’s formula, after the denunciations about the gigantic fraud committed in the electoral propaganda of the first round of the presidential elections, in addition to the evident abuse of power and the favoritism that the military candidate received from evangelical media such as Red Record.

The case was denounced by journalist Patricia Campos Mello under the title “Empresarios pagan campaña contra el PT por WhatsApp” (Businessmen pay for campaign against the PT on WhatsApp). The defamatory propaganda operation, organized by the military, which hacked into the Brazilian electoral system with the consent of other courts that are now silent, is illegal for two reasons: the publicity was not presented to the TSE and was clandestinely sponsored by companies connected to the candidate.

The open denunciation before the TSE, demands resolution of two crimes: 1) Box 2 (clandestine) of undeclared campaign donations and 2) abusive propaganda for using databases bought without the consent of who would receive that deluge of messages by SMS and Whatsapp.

Only one of these illegal donations would have the value of more than R$ 12 million reais (3 million dollars) for a contract to send millions of messages. That alone would be enough proof to challenge the candidacy and cancel the formula of the military Bolsonaro and Mourão.

The massive sending of news through smartphones and mobile devices may also have occurred during the shortages strike organized by truck drivers a few months before the elections. This strike would have served as a laboratory to test the tools of segmented spam via whatsapp and defamatory and slanderous advertising pieces that were then massively used the last week before the 1st shift.

During the two shifts of the elections there were hundreds of crimes, frauds and strange maneuvers that must be carefully analyzed by the TSE, such as the 3 million suspended voter credentials and the 2 million modified voting addresses a few days after the voting. Also the measures adopted by the Federal Public Ministry, such as the reduction of buses and other means of transport in territories related to the PT (such as the city of Salvador de Bahia), the deaths, intimidations and countless attacks on those who campaigned on the streets, the dozens of invasions of federal universities and the clear fraud in electoral propaganda through the massive sending of Spam to millions of people through Whatsapp with cash 2. 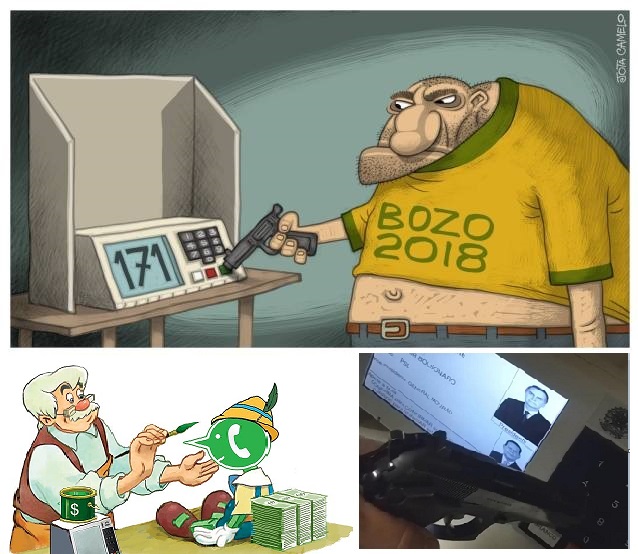 That investigation may occur before the date set for Bolsonaro’s possession and the formula be annulled for the crimes of abuse of economic power, threat, incitement to hatred, misleading propaganda and illegal campaign financing.

If Brazil’s Electoral Courts do not react, broad sectors of the Brazilian population are organizing to denounce this to the world. In the second round, a wave of non-violent resistance was initiated, which is making people aware of how all this happened in an orchestrated and systematic way.

The voting is over, but not the electoral process. The TSE announced that it will answer the questions it is receiving. There are more than enough reasons to demand the annulment of Bolsonaro’s formula.

That election only ends when democracy returns with fair elections, when all candidates are treated without favoritism in the courts and without illegal advantages in the main Internet, radio and TV vehicles.