This morning I was with Deputy Karol Cariola in an emblematic place located in my district, in the commune of Peñalolén. A place that remembers the worst of what was [Pinochet’s] Dictatorship. A place that should have always been a place of Peace and yet the Dina turned it into one of the most terrifying places for torture and murder: Villa Grimaldi or the sinister Terranova Barracks.

There, people were killed, tortured to the limit of what could be imagined, compatriots were disappeared, tied to rails and then thrown into the sea. There is the living testimony of what was the horrific military civic dictatorship that some still pretend to deny.

But that place of horror, paradoxically, is also a place of Love, a place of remembrance of loved ones, a place of memory, a place of Life. There is a wall there with the names of those murdered. And that humanises them. They are names like the Recabarren Gonzalez brothers, or Bautista Van Showen and 260 others who were executed and disappeared.

Today, President Piñera pointed out that September 11 is a date that divides Chileans, reflecting with that phrase the serious problem we are living as a society, because 45 years after the military coup, it is not possible that some still justify what is unjustifiable. At this point we should have total agreement to condemn the serious crimes, the treacherous murders and the horrendous humiliations that thousands of Chileans suffered for the simple fact of thinking differently. And that condemnation should be complete, with no contexts to minimize the crimes and no buts to justify the horrors.

Today, 45 years after the civic military coup, we watch with concern as denialism increases and settles in the bosom of the Right. It is intended to erase today what was denied before! But they can’t! They will not be able to make an entire people forget. They will not be able to erase their traces of death. We will not forget. And they will never be able to justify what they did. There is no possible context. There is no context, no matter how much they try to justify what is unjustifiable.

And without revenge, but with clarity and firmness, with the conviction that we are doing the right thing, we will continue to seek truth and Justice. And we will do everything necessary so that Justice never gives way to Impunity.

For me today is also a day of hope when I see that the new generations have made their own the demand and commitment for truth and justice.

Today I do not ask for any Office. [a formal request recorded into the Chamber of Deputies Minutes]

Today I just want to pay tribute to all the Sites of Memory that like Villa Grimaldi honour the Memory of the fallen so that Never again… So that never again!!!

This is a tribute to the murdered, the tortured, the beheaded, the raped women, the exiles, the disappeared detainees, the executed politicians. A tribute to all those who died for the simple crime of wanting to bequeath a better world to the new generations.

I am not asking for any Office.

I only ask that we, as a society, be able to assume a solemn commitment never to deny what has happened and to fight every day of our lives for truth, justice and above all for a more humane Chile. 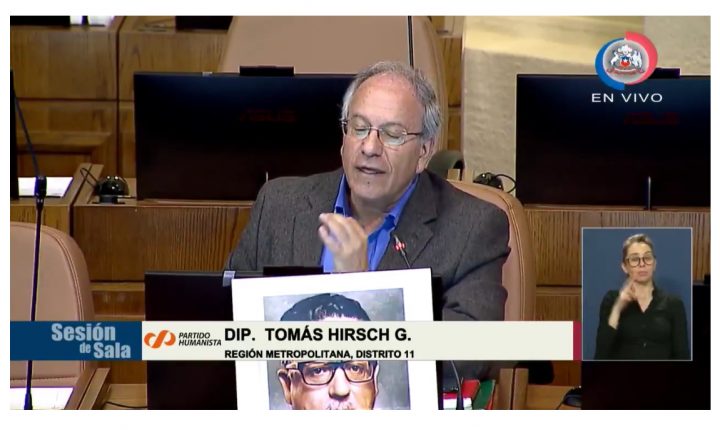 Tomás Hirsch
Tomás lives in Santiago de Chile. He has been a member of the Humanist Party since its inception in 1985 and resigned in 2020. He was the spokesperson for New Humanism in Latin America and was twice a presidential candidate for the Chilean left-wing parties. He is currently one of the most progressive Chilean deputies.