Contrary to their stated manifestos, the most neoliberal right wing governments take advantage of the massive migrations that their own policies on wars and promotion of poverty in developing countries produce. The concentration of wealth continues unabated increasing inequality and social unrest but the way this trend is connected to racism and anti-immigration policies is seldom mentioned.

Here we have the evidence of the rich getting richer and the poor getting screwed up.

“The latest after-tax corporate profits reported in the second quarter of 2018 are at a record high. Meanwhile, nearly half of the country struggles to pay for basic necessities.

As the Wall Street Journal reported this week, corporate profits are up 16.1 percent when compared to the second quarter of 2017, which is the largest year-to-year gain since 2012. …

“However, despite how well investors have been faring over the last decade, those gains have not been shared with the vast majority of American workers. The latest data compiled by the St. Louis Federal Reserve shows that while corporate profits have been steadily rising since the Great Recession of the late 2000s, workers’ share of those profits is still below recession levels.

“The fact that corporate profits are so high may be precisely because wages for workers have been relatively stagnant for decades. The Urban Institute published a report earlier this week that found that of the 7,500 Americans it surveyed, approximately 40 percent were unable to afford basic necessities, like groceries, rent, and basic healthcare. The Los Angeles Times broke down the study’s astonishing findings, including how nearly one in four Americans struggle with food insecurity.” Gritpost

“The number of people in the UK earning more than £1m a year has jumped to over 18,700, with more than one in 10 of them living in Kensington and Chelsea, according to figures released by HM Revenue & Customs.

The total increased by 3,700 in the latest available tax year, but there are concerns that many of the “highly mobile” high-earners could quit the UK in the wake of a messy Brexit.” The Guardian . Meanwhile austerity continues to affect the poor and services.

Kleptocracies, or government by thieves, steal from the poor and to a lesser extent from the middle classes to give to the rich.

Right wing parties keep the population fearful of an uncontrolled influx of migrants and therefore vote por the kleptocratic parties that steal from them their livelihood  via austerity and force them into poverty, competing with migrants for services.

The media in the hands of the servants to the kleptocrats not only stoke up the fear of migrants but also concoct false smears about the parties that would protect both the workers rights and those of the migrants.

Kleptocracies use “Democracy” and “the will of the people” to justify policies in fact voted by ill informed minorities as if they were the whole of the population.

Kleptocracies dehumanise migrants, degrading their culture and customs, using their predicament as “proof” of their inferiority and unworthiness.

Kleptocracies empty existence of meaning by pretending the only purpose in life is to achieve wealth and power, a message repeated ad nauseam by the mass media and the education system.

Kleptocracies believe themselves to be beyond the consequences of climate change and death by health problems created by environmental pollution continuing therefore to support contaminating forms of energy.

An international alliance of “progressives” being born

The situation is becoming critical as this state of affairs has promoted the rise of the ultra right, the neonazis, fascism in its many forms, adding to the already existing irrational fundamentalisms of all colours. If we fail to understand this is the result of fear instilled through manipulation we will not be able to give any coherent response to this debacle. Compassion for the facists that show no compassion for migrants and minorities? Strange as this may seem the only way out is for everybody to improve their situation by changing the dynamics of the present system. People take refuge in extreme proposals when the future seems closed, when solidarity becomes a bad word, when they feel alone and under siege.

Only a nonviolent revolution, devoid of compulsion towards revenge can get us out of the vicious circle of alternating power mad opposing narratives. In Silo’s words, “realising that progress for the few is progress for no one” should make us meditate about the need for all inclusive new proposals.

Some positive responses are starting to emerge, new and creative proposals from people with a humanist heart, proposals for the well being of humanity as a whole. Some timidly resuscitate “socialism” but fear of the backlash has led some to rebrand themselves as “progressives”. And it may be working. Today Bernie Sanders writes for The Guardian  “A new authoritarian axis demands an international progressive front” ….”In order to effectively combat the rise of the international authoritarian axis, we need an international progressive movement that mobilizes behind a vision of shared prosperity, security and dignity for all people, and that addresses the massive global inequality that exists, not only in wealth but in political power. 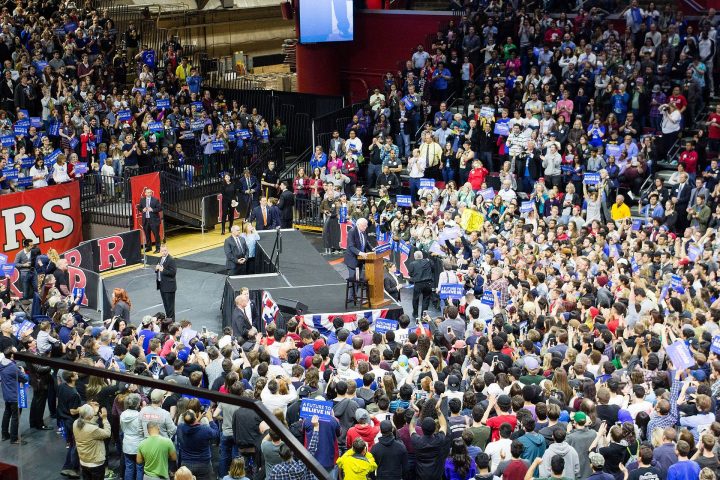 Sanders speaking at Rutgers University in May 2016

“Such a movement must be willing to think creatively and boldly about the world that we would like to see. While the authoritarian axis is committed to tearing down a post-second world war global order that they see as limiting their access to power and wealth, it is not enough for us to simply defend that order as it exists now.”

The best antidote for toxic politics is an open future, a new humanism that rejects fear and manipulation, and brings together all the cultures of the world into a Universal Human Nation. Then people will stop the self defeating election of kleptocratic governments and seek to transform purely formal democracy into Real Democracy.