In Puglia, a group of young Italians and migrants has launched an extraordinary venture, restoring positive meaning to the tomato, one of the symbols of a region where the exploitation of illegal workers for casual labour is rife. We talk to Graziana who is part of the Solidaria association, based in Bari. She is responsible for marketing and distributing the SfruttaZero sauce, which means “zero exploitation” in Italian, and also participates in its production alongside other members of the project.

What led you to launch this courageous project?

You need to take a step backwards to understand what was behind SfruttaZero. It was actually a project launched in Bari in 2014 by the Solidaria association which was joined by Diritti a Sud, another association based further south in the town of Nardò, in 2015. However, its roots go back even further, to 2008 and support from locals for the right of political refugees and asylum seekers to paperwork, to be received, and to live through grassroots solidarity. Examples of this support included helpdesks for legal assistance and healthcare, Italian courses and the use of abandoned public buildings for housing. It led to experiences of mutual aid and cooperative labour with migrants and locals working side by side.

Sadly, Puglia is a region which is noted for the illegal exploitation of casual labour and the conditions, bordering on slavery, that agricultural labourers (many of whom are migrants) are subject to. We had the idea of restoring a positive meaning to the tomato, one of the symbols of our land, by producing a tomato sauce within a food supply chain that was wholly ‘outside the market’ and, as its name suggests, with zero exploitation. The enterprise respects the land and those who work it and everyone’s dignity is maintained by being paid fairly. All members participate and make decisions in a flat, non-hierarchical structure, showing that it is not necessary to work under bosses in slave-like conditions.

The goal of the SfruttaZero project is to reclaim the right to work and to earn an income from the current system of exploitation and insecurity. At the same time, we are highlighting how the illegal exploitation of casual labour is a phenomenon that is present throughout the agricultural food chain, from the fields right through to logistics and distribution. The root cause of this is the prices imposed by large retailers for simple reasons of profit, a practice made easier by laws passed in their favour.

We also wanted SfruttaZero to be a response that rang out loud and clear to the growing racist forces – fed by those who would have us believe that immigrants are the cause of all our problems – that pit Italian and foreign workers against each other. We believe instead that one way to try and overturn the current system of oppression and move away from a condition of subservience is to support each other by standing as one in our fight. This will show how reciprocal solidarity can provide the material conditions and needs for the lives of both locals and migrants. We need to be united and supportive of each other and overturn this false and toxic narrative. Those that speculate on and profit from our lives are the real “enemy.”

How many people are currently involved in the project?

There are currently about forty people involved in Bari and Nardò; they are employed in various stages of the process including farming, production, distribution, administration and marketing.

What are your plans for the future?

We plan to keep on making tomato sauce, and perhaps launch other products. Our biggest goal is to make this a lasting project. We hope that it can provide the means to make a living and fulfil the hopes of those who are taking part. At the moment, we are all working in other insecure jobs and we would like this to become our full-time occupation.

We think we can do this by strengthening the whole production chain and the network of supportive relationships that we have built over the years.

Participation in SfruttaZero has increased steadily as its reputation has grown. In Bari for example we farm the tomatoes and process them with Ortocircuito, the city’s first urban social allotment, and the result of a project set up by an educational farm based at Masseria dei Monelli, a country estate in the town of Conversano, as well as with the inhabitants of Villa Roth. The villa was an abandoned building which – after it was handed over by Bari’s city council as a result of a case brought by political refugees – now sees Italians and Africans living together and sharing the experience of self-managing their housing.

In both Bari and Nardò we are responsible for the entire production process, from growing the tomatoes (in accordance with ecological principles) right up to the distribution of the finished product. After acquiring a small van, we make direct deliveries in Italy where possible. After a lot of effort both the Solidaria and Diritti a Sud associations have finally managed to acquire rented land where we can establish social agriculture projects throughout the year, and not just seasonally.

Securing factory space to share with similar-minded organisations that are also re-evaluating the agricultural food chain in search of an alternative to large-scale retailing would be the final step. Although we are working towards this crucial next stage, it will not be easy given the resources required; it will cost money that, alas, we currently do not have.

Where exactly is Sfruttazero sauce available and how can you order it?

You can find SfruttaZero tomato sauce in both the locations where it is produced, in Bari and Nardò, as well as in other areas of Italy. Our two organisations are part of Outside the Market – Self-Management in Action, a national network comprising reclaimed factories and farms, self-managed social spaces, mutual institutions, independent publishers, non-industrial agricultural and artisanal projects, and community kitchens and markets. It brings together a diverse range of experiences in mutual aid societies and co-operative work. Through the network, we are trying to build a real alternative to the existing market, not just a different one. Constructing a different, self-managed system of distribution is a real challenge. You can find SfruttaZero in some of Fuorimercato’s distribution centres, for example at Bread & Roses in Bari, Ri-Maflow in Trezzano sul Naviglio near Milan, Communia in Rome and Venti Pietre in Bologna.

You can find out more by contacting us on our SfruttaZero Facebook page or by sending an email to sfruttazero@gmail.com

Have you thought about how you might raise awareness of your valuable experience more widely?

In the last few years, SfruttaZero has met with a positive response and received a lot of support, and not only in Italy. Last year, for example, we were in Bremen at the Solidaria Global Summer Festival, a really good, large anti-racist festival.

A great community has grown up around SfruttaZero. We always take part in initiatives where we are invited to introduce people to SfruttaZero and our work in Bari and Nardò. In time we believe projects like ours will grow in number and create their own network.

Earlier this year, on the 2nd of June, we organised the first big celebration for SfruttaZero. It was hosted by Ex Fadda, a fantastic urban laboratory venture in the village of San Vito dei Normanni, near Brindisi. We called the party “The free republic of the tomato”; the name expresses our aim that what we are building, together with the many other projects of mutual support in Italy, will give rise to new institutions. We would like these projects to be grassroots and solidarity-based instruments that attempt to rebuild atomised and fragmented social relations. The 2nd of June will be a regular date in the calendar, one we would like to expand into a real festival promoting reflection and celebrating social cohabitation.

What can the independent media do to help you in this?

It can certainly help by spreading news of our project, highlighting the deeper reasons behind what we are doing, its political and social significance; and give a voice to the social and solidarity-based economy that many different groups through their hard work and passion are attempting to make a reality. 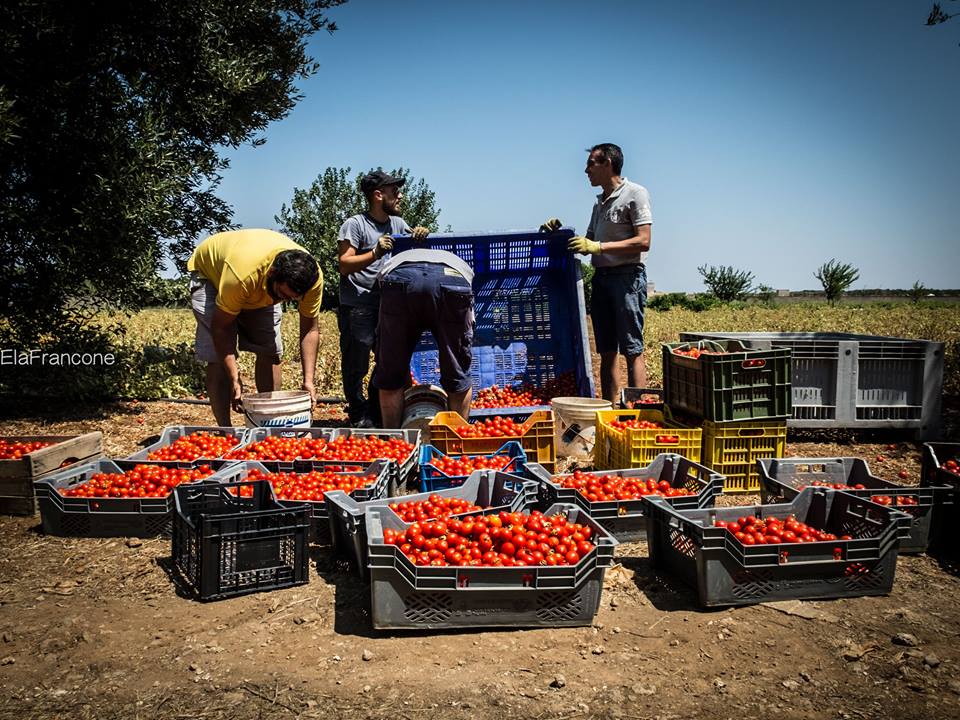 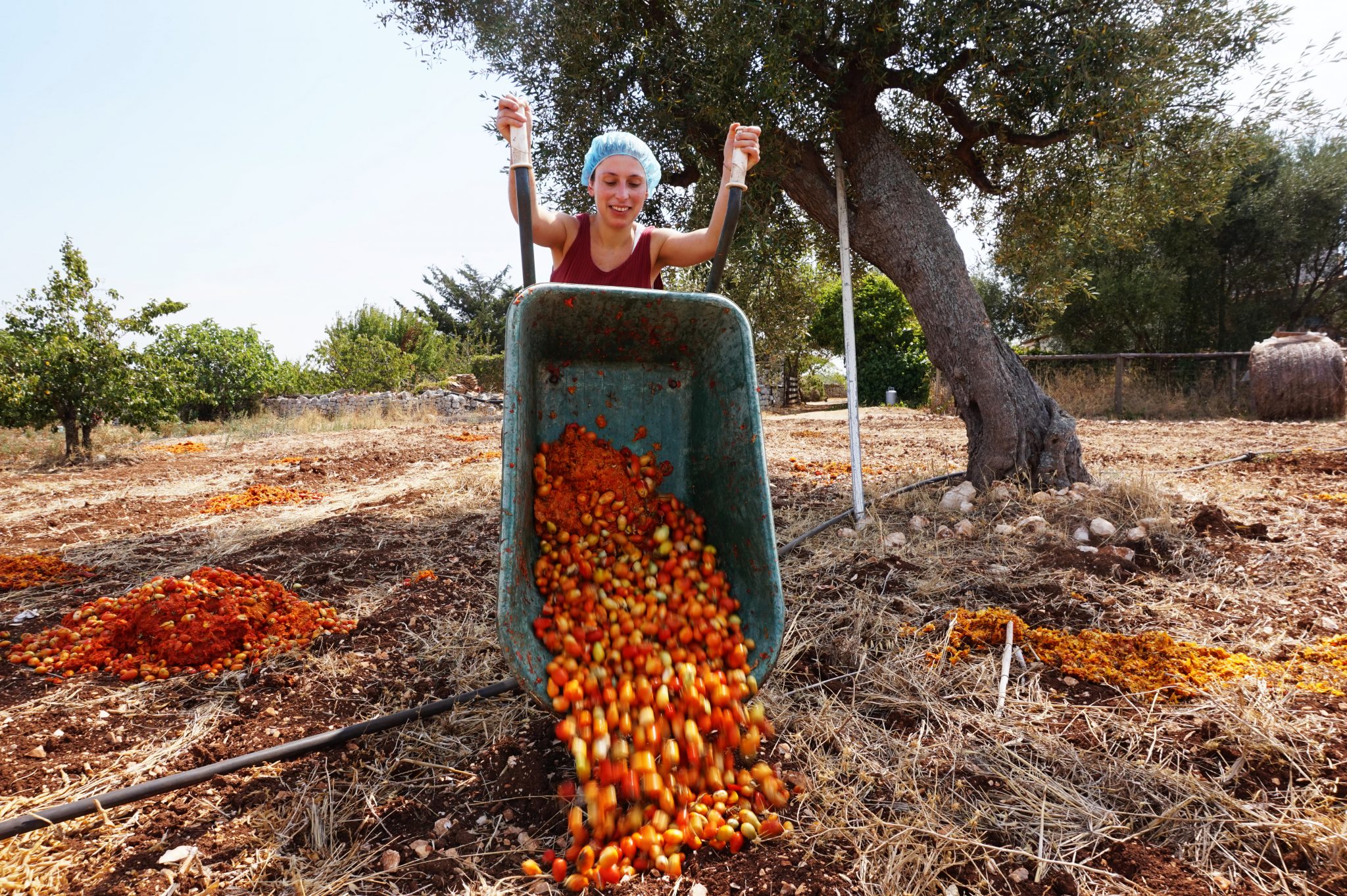 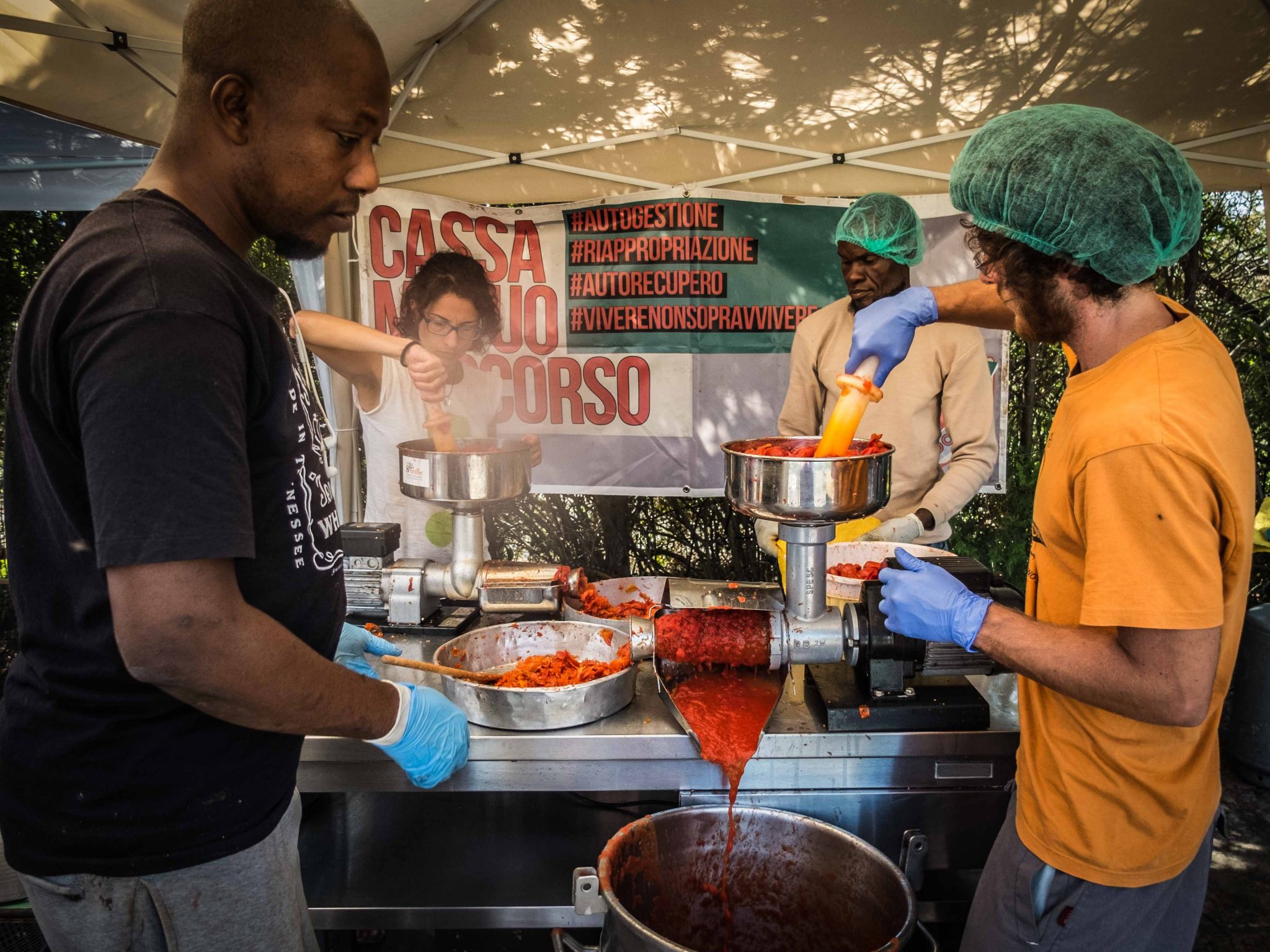 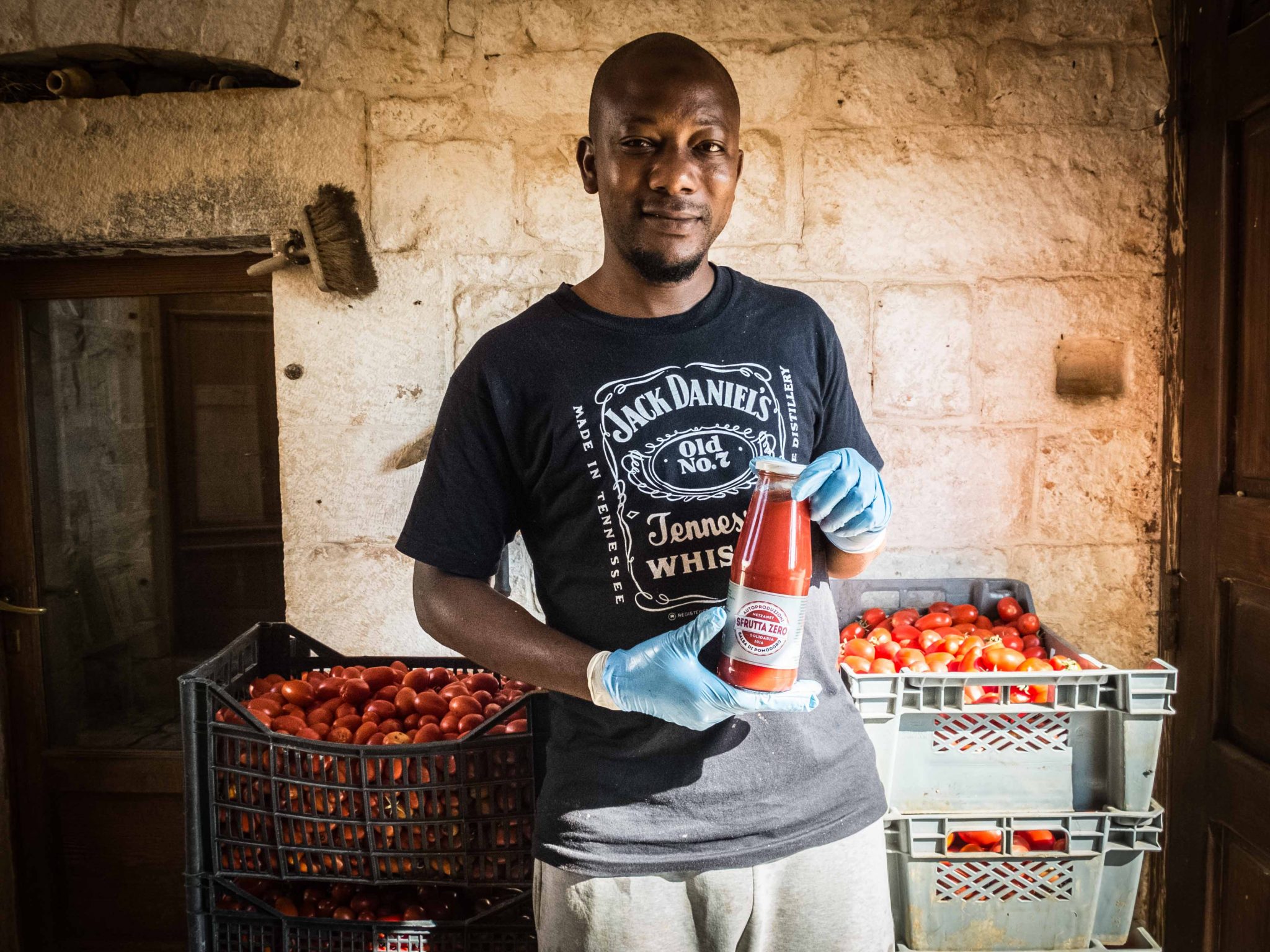 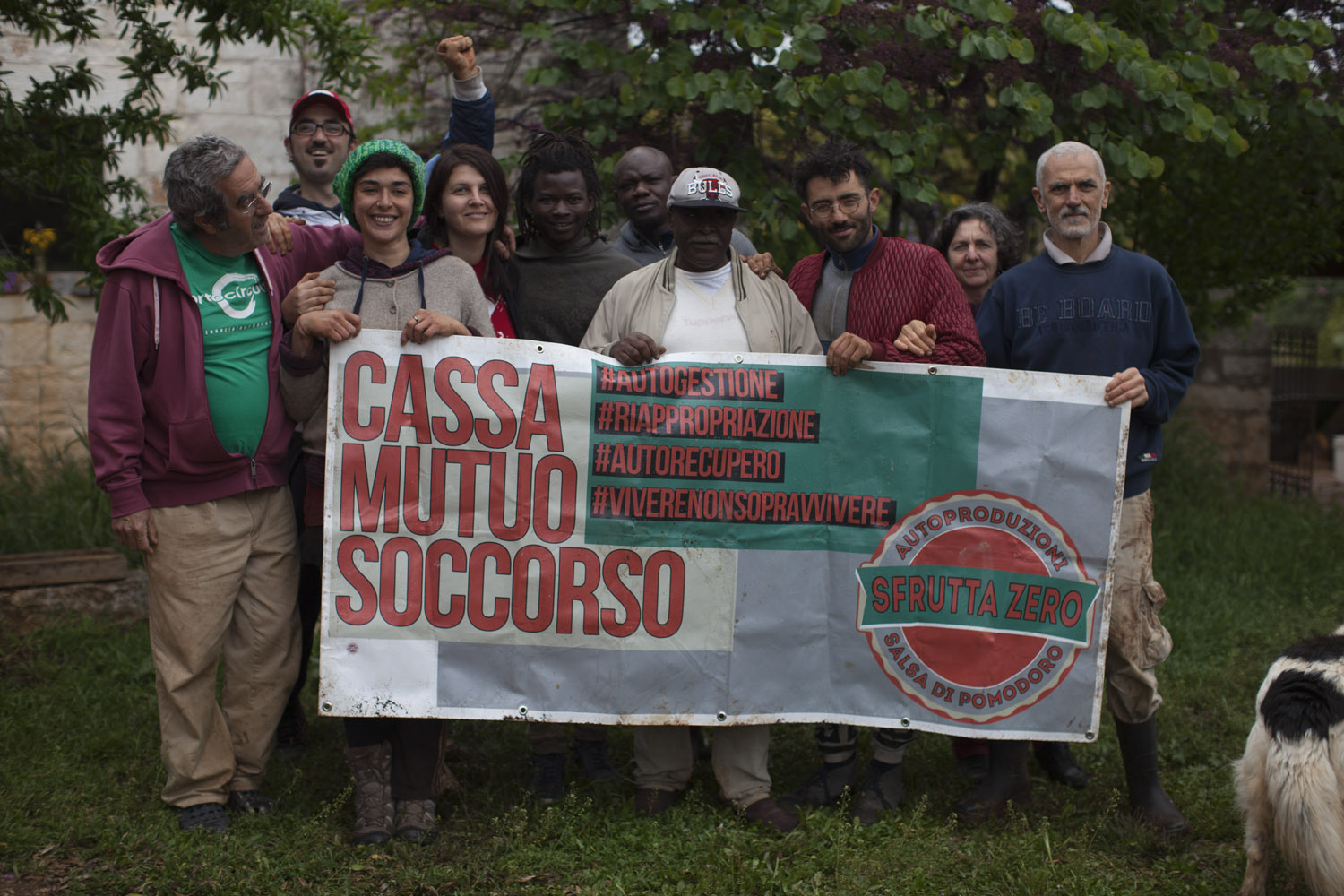 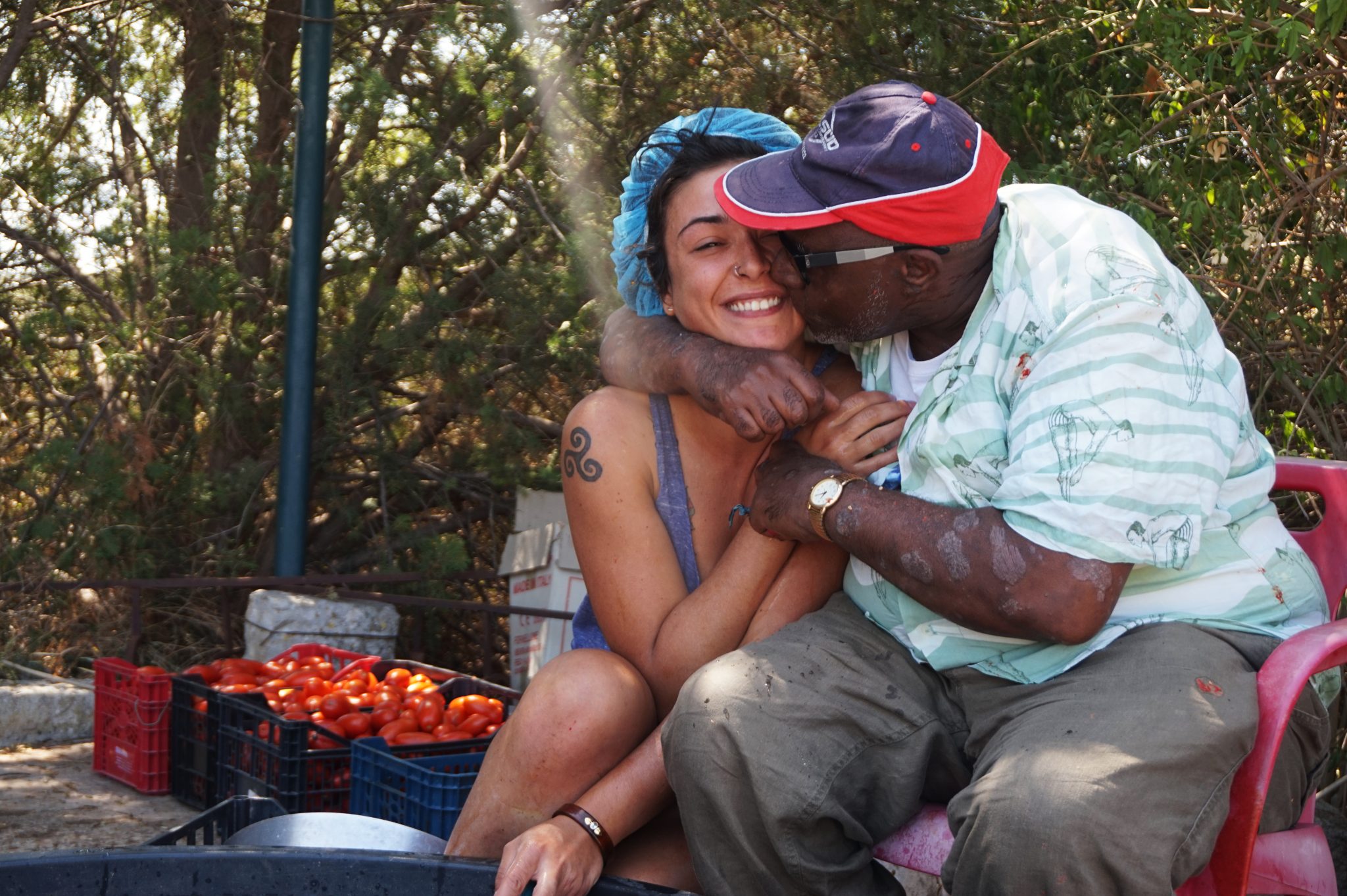