On the occasion of the arrival of the humanitarian ship Open Arms in Barcelona, after having rescued sixty people in the Mediterranean, the organisation Proactiva Open Arms and various authorities from Barcelona and Catalonia, as well as the MEPs accompanying the ship made the following statements: 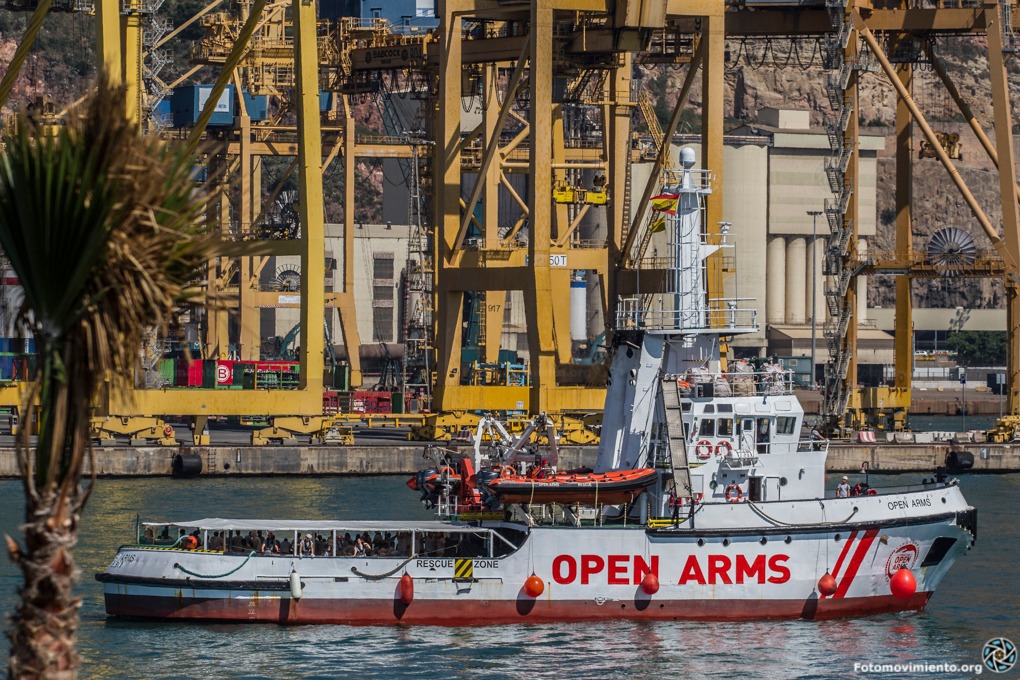 Ada Colau, Mayor of Barcelona, welcomed the people from Proactiva Open Arms and recalled that Barcelona City Council has been asking to be a refuge city for three years. “We are furious about European immigration policy and we do not want to be complicit, states must save lives.  If we respect human rights the only option is to save lives,” she said. She highlighted the role of Proactiva Open Arms, who have been demonstrating over the years that lives can be saved in difficult conditions. “If they can do it, why can’t states?”

The Mayor said, “We have seen the Open Arms leaving the port many times and for the first time they have been able to return with rescued people, even against the criminalisation that NGOs are being subjected to. Thank you for showing that humanity is not lost and that European democracy has a chance.”

“Finally, we have been able to carry out a reception operation in our city’s port. We have shown that it’s possible to coordinate quickly in order to give a response,” she declared, before thanking all those who took part in the operation: health workers, security forces, lawyers, the Red Cross, etc.

She stressed that it is the duty of institutions to rescue people in all cases. “Every single human life matters, no matter where it comes from. In Barcelona we wanted this day to come when we could be a host port. We have welcomed hundreds of invisible people and we need these gestures to become government policies, we need an organised migration policy. What is in crisis is the credibility of the European democratic project.”

On the European fund of hundreds of millions of euros earmarked for asylum, she said that so far it has not been used to receive migrants. Contrary to what some politicians say, the people who arrive want dignity, not to live on benefits, we need the law on non-citizens to be revised and residence permits to be granted so that these people can rebuild their lives. 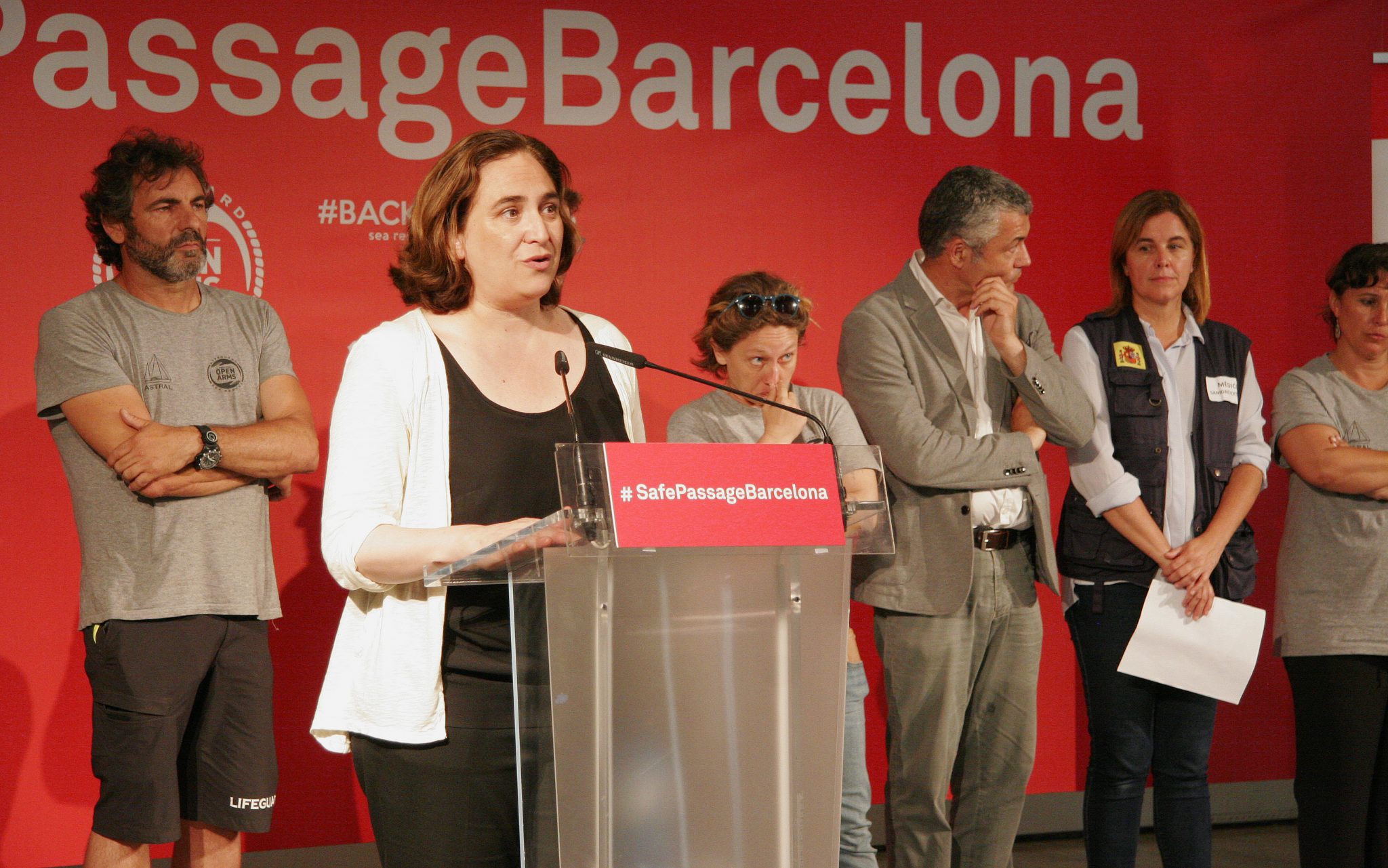 Oriol Amoros, Secretary of Equality, Migrations and Citizenship of the Generalitat of Catalonia welcomed those rescued by Open Arms. “We are witnessing an obvious debate, we should not be discussing whether or not maritime law is being complied with. We are afraid that Europe will no longer be an area of freedom and democracy,” he said. He also thanked the work of Open Arms, organizations, state and city councils that have supported this operation. “Although the number of migrants we have in this country is low, given the increase in conflicts, the number of requests for asylum is increasing, as is the arrival of minors and arrivals via the southern border. The solution must be to defend human rights at source, in transit and at destination.”

Carmen Aramburu, health director of the government delegation in Catalonia, explained the health system that has been set up to receive the ship and reported that all those rescued have been discharged on site.

Oscar Camps, director of the Proactiva Open Arms organisation, thanked everyone and explained that after three weeks it was difficult to get off the boat. They arrived happy to have rescued sixty people, but sad because they were refused entry into two countries of the European Union, despite being in need of diesel, food and support. “When you are threatened by the Libyans and the European Union tells you not to intervene, to go home, making the decision to rescue people becomes difficult.”

Oscar thanked the captain, who had to withstand pressure from the European Union, the President of the Spanish government and his cabinet who provided them with a port, the Mayor of Barcelona who has always helped Greenpeace and who has always been at their side, and the Red Cross.

He also denounced what is happening. “We have not rescued sixty people, we had to leave more than three hundred people to die. The Maltese government won’t let humanitarian ships out of its ports and the Italian government won’t let them in, in breach of the EU framework.  Who will enforce the law?  It is true that the Spanish government has assigned us a port, but that is its obligation.”

He explained that 500 million euros are paid to the Libyan coast guard, a group he defined as terrorists, traffickers and torturers. Open Arms has been shot at while sailing in international waters and the captain has been prosecuted, accused of encouraging illegal immigration, with prison terms of four to twelve years. The organization is accused of being a criminal group trafficking in people. 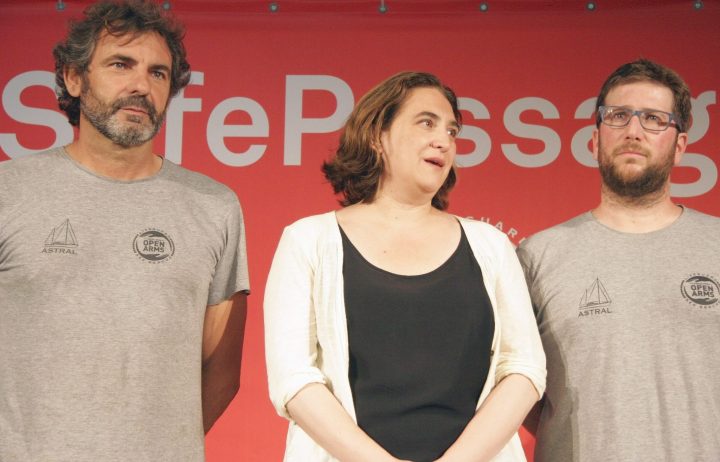 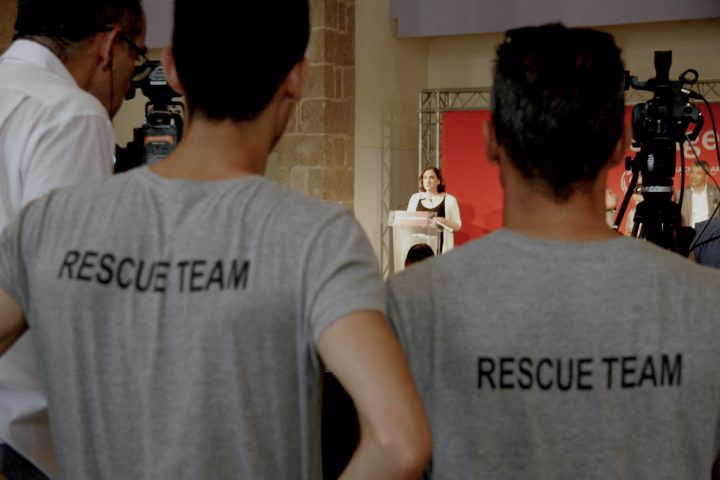 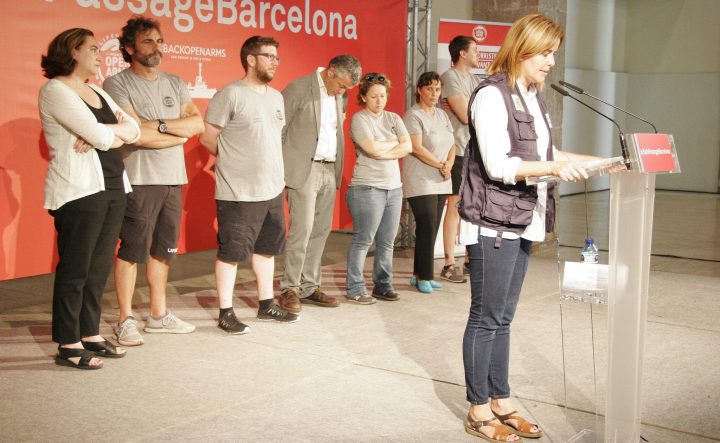 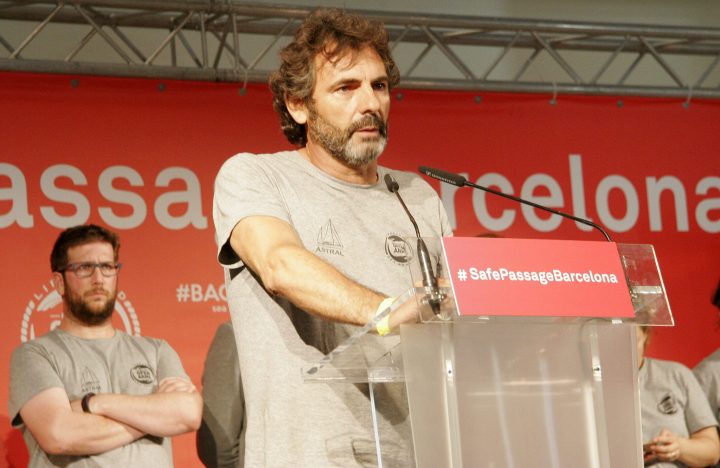 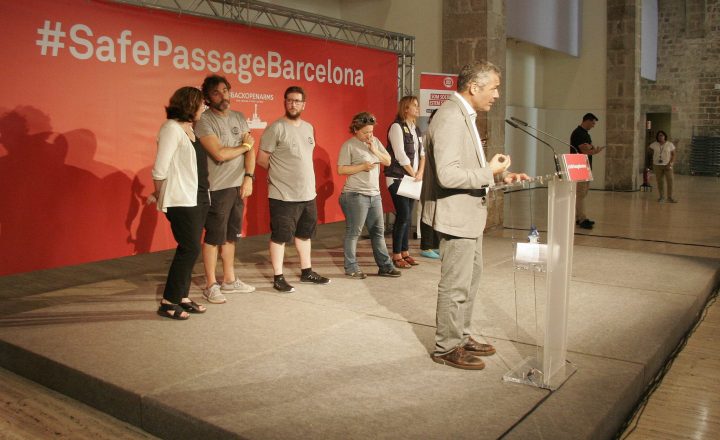 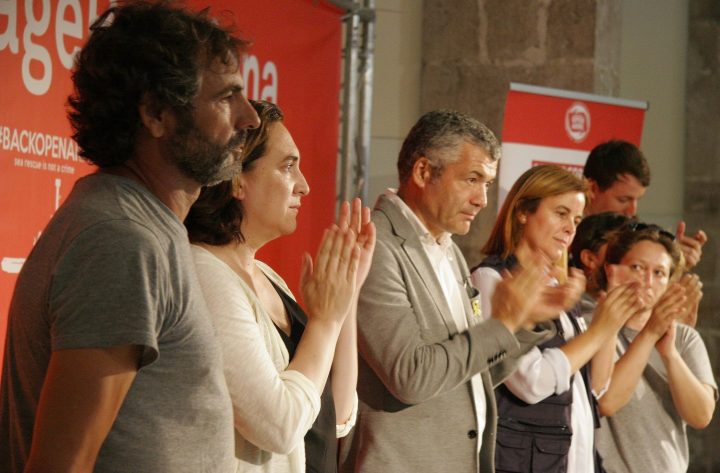 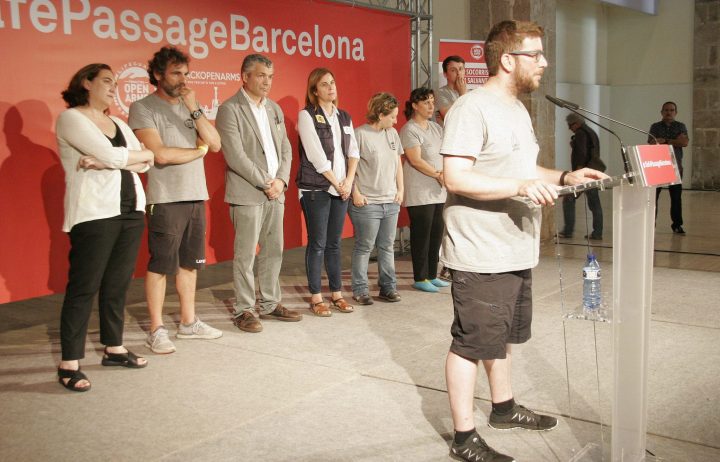 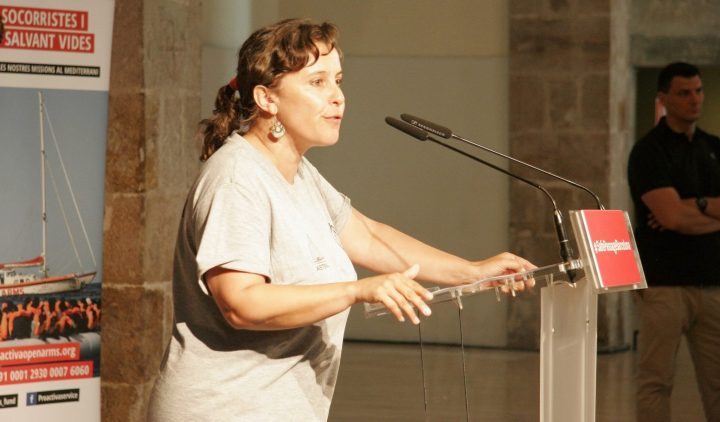 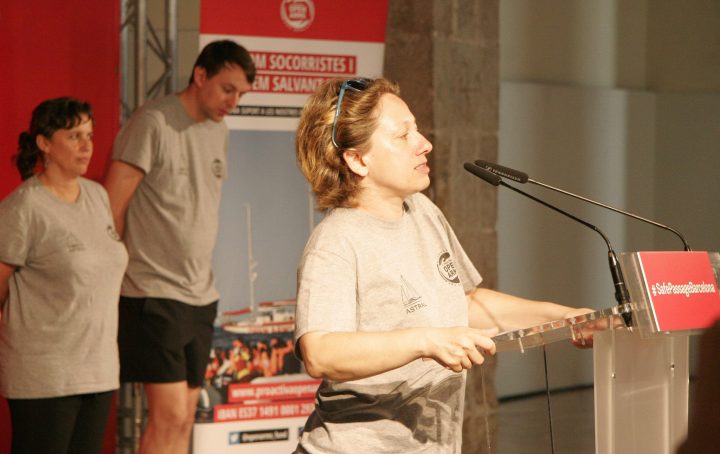 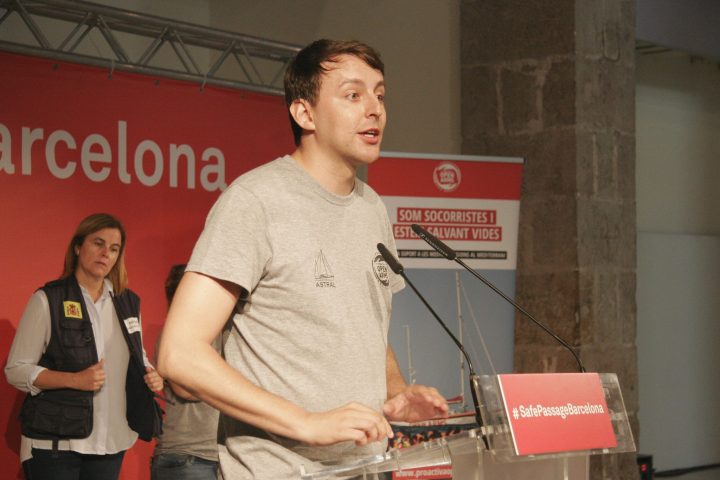 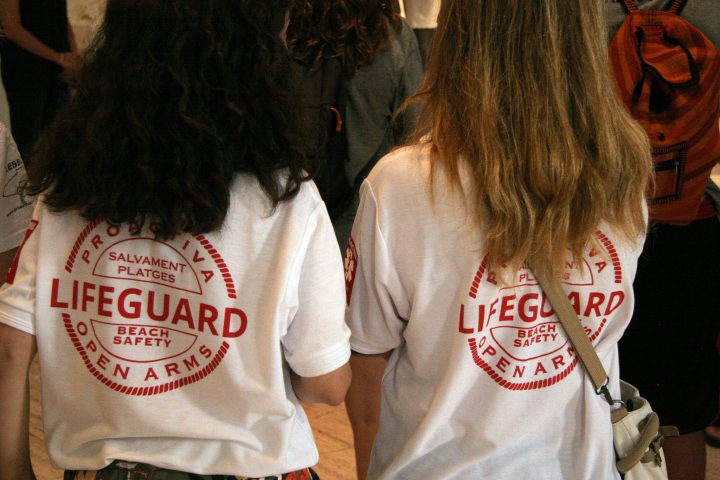 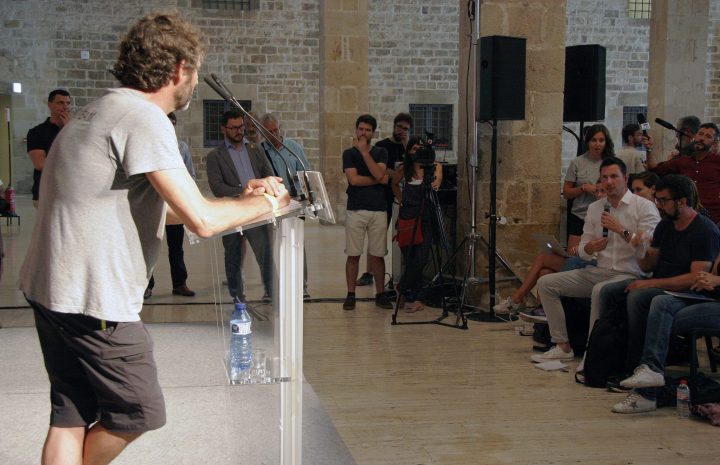 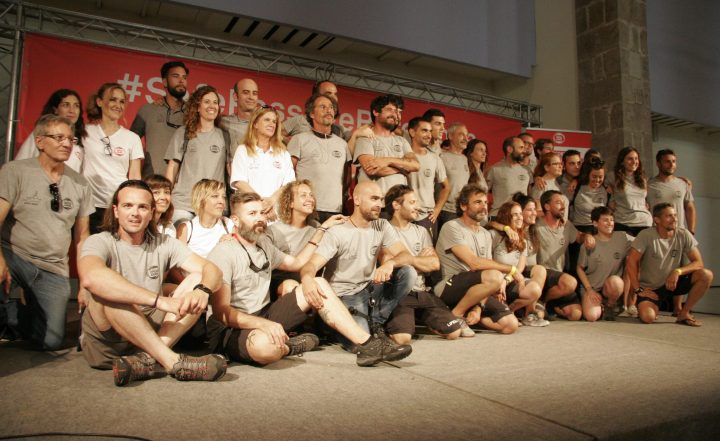 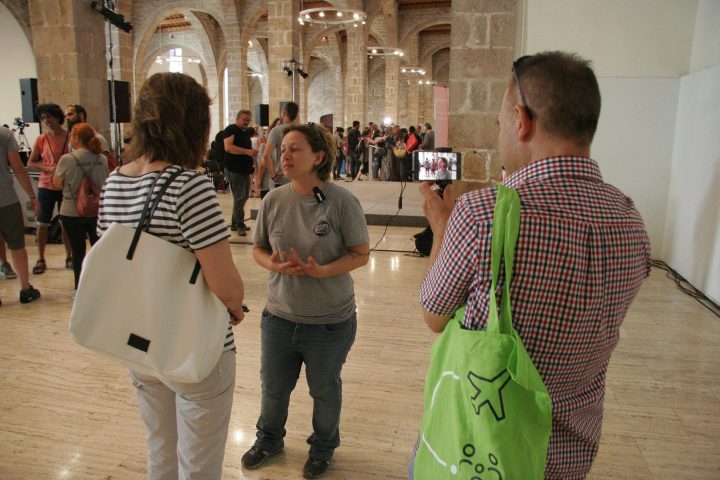 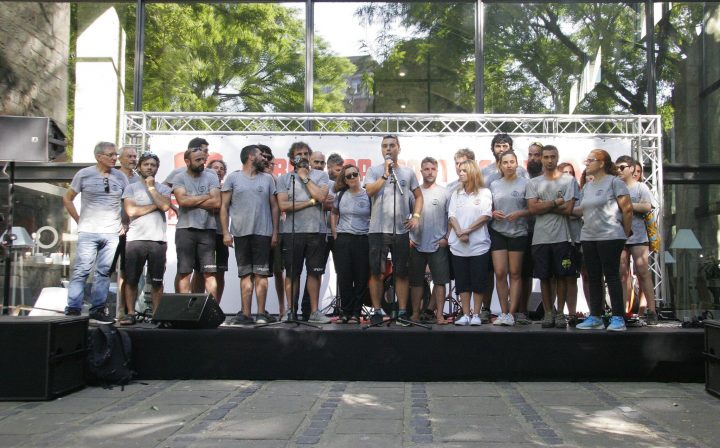 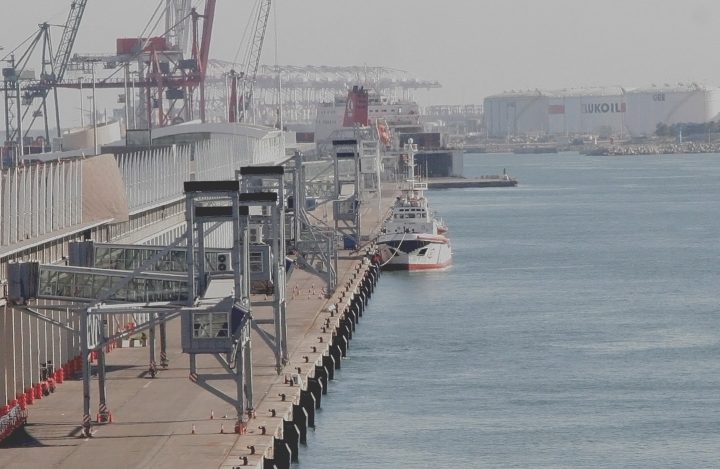 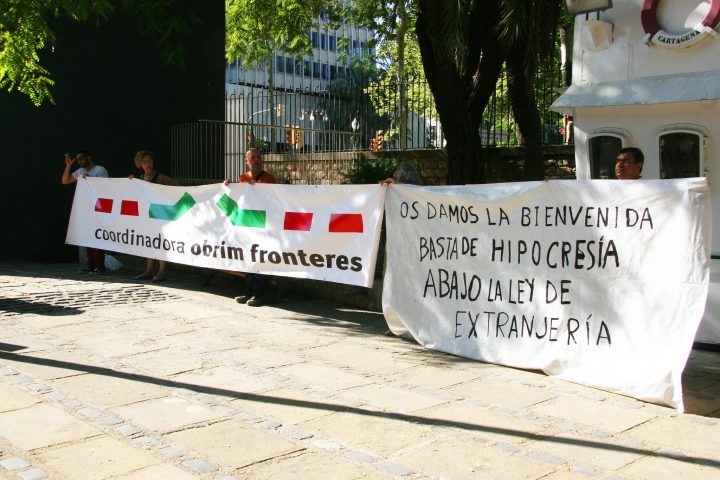 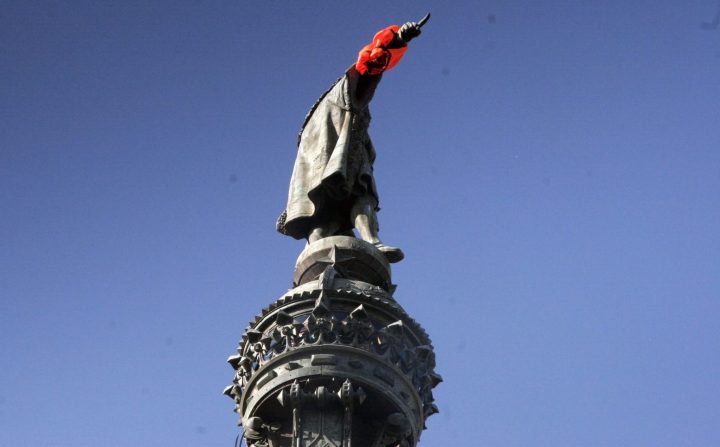 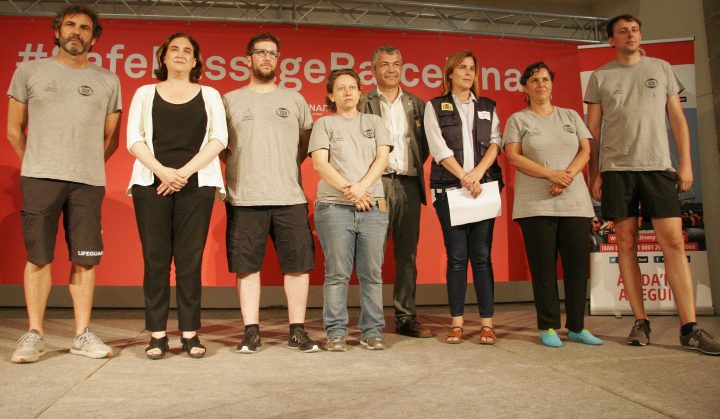 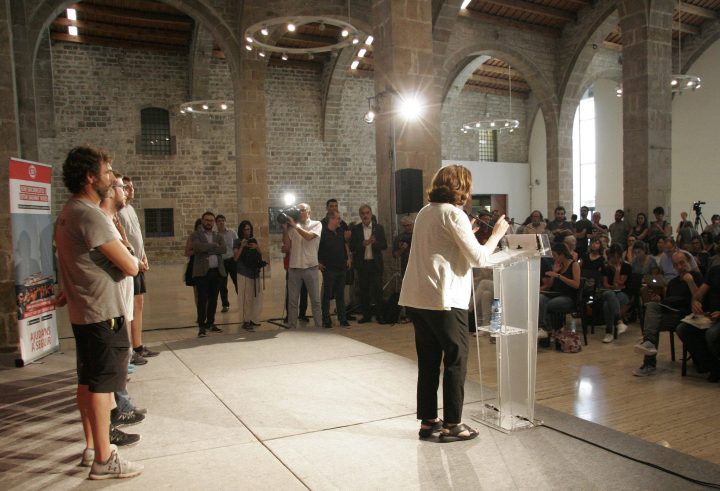 “This time they have paid more attention to us, perhaps because we were carrying four MEPs, we will have to come back with more MEPs, if we want to continue saving lives. We need a big loudspeaker, we have been trying for three years to mediatise this situation so that they explain, report and document it. Perhaps we have been able to change the opinions of hundreds of thousands, perhaps this helped Pedro Sánchez make the decision to bring the Aquarius to Spain. We have come very close to being able to save hundreds of lives, we have come back with sixty people, but there were three hundred people we couldn’t rescue, but nobody cares. To come here has taken us four days and three hundred dead and we are all responsible, we need the support of many more,” he added.

Miguel Urban, MEP for Podemos, thanked the crew of the Astral and the Open Arms. “The right to asylum is being questioned, the right of migrants, but by defending the rights of migrants we are defending our rights. Since 27 June there have been more than 400 deaths in the Mediterranean that has happened because there were no humanitarian ships, because they were held in Malta. The European Union is covering its hands with blood and turning the Mediterranean into the largest mass grave in the world.

“Over the last two weeks, six hundred migrants have arrived in Barcelona by bus, a policy is needed not only of gestures but also a change in the migration policies of the European Union and of Spain, such as the closure of immigration detention centres and compliance with protocols, both for those who arrive by sea and by bus. What is at stake is who has rights in the European Union, who has chosen to combat the poor rather than poverty. NGOs are criminalised because they are witnesses to what our policies generate, what is sinking is the European Union’s project,” he said.

Ana Miranda, MEP from the Galician Nationalist Bloc, called for “no more such policies and no more shipwrecks”. She said that the MEPs were where they needed to be: with the unjust causes, denouncing this European Union, giving voice to the dead who cannot speak. I am grateful to have heard the stories of Mustafa, Judith and Mohamed,” she said. Our duty as politicians is to denounce these cases from the institutions that decide to stand up for these people. I come from a people who were migrants in the 19th and 20th centuries, as well as in the 21st, but we have forgotten and we say that migrants take away our work, when the problem is the precariousness of work.”

Eleonora Forenza, MEP for Rifondazione Comunista-Potere al Popolo, also thanked Open Arms and defined the experience as very important, both as an individual and as an institutional representative. She said she is ashamed of the actions of the Italian government, which favours a racist policy. She recommended the experience to those who speak of repatriation, or to those who use the word “homeland” and “borders”. During this trip I have thought about how many we could have saved if we did not have this policy of opposition from countries such as Malta and Italy and from the European Union itself. “If the Italian government wants to be remembered for crimes against humanity, this is the wreck of the European Union,” she concluded.

Javi Lopez, PSC-PSOE MEP, explained the experience of rescuing lives in the Mediterranean as full of hope, the hope of reaching a welcoming port, but also of meanness. Meanness of governments that scold NGOs. We’ve been on a one-week trip, but many of them take years to travel. “I remain with the work done and also with what remains to be done.”