Malalai Joya is an Afghan politician, activist and writer. As an elected Member of Parliament, on December 17, 2003 in the Loya Jirga assembly, she denounced the presence of people she called “warlords and war criminals” in Parliament. Since then she has suffered attacks and death threats, so much that she now has to live in hiding and under escort.

In May 2007 she was suspended from her role as a Member of Parliament for calling it a zoo. The suspension, which she subsequently appealed, generated strong international protests including a statement signed by writers and intellectuals such as Naomi Klein and Noam Chomsky as well as Canadian, German, English, Italian and Spanish parliamentarians.

In March and April this year she held numerous meetings in Germany and Italy, where she was invited by festival Dedica and Cisda (Italian Coordination of Support for Afghan Women). We were able to meet her in Milan a few days before her return to Afghanistan. 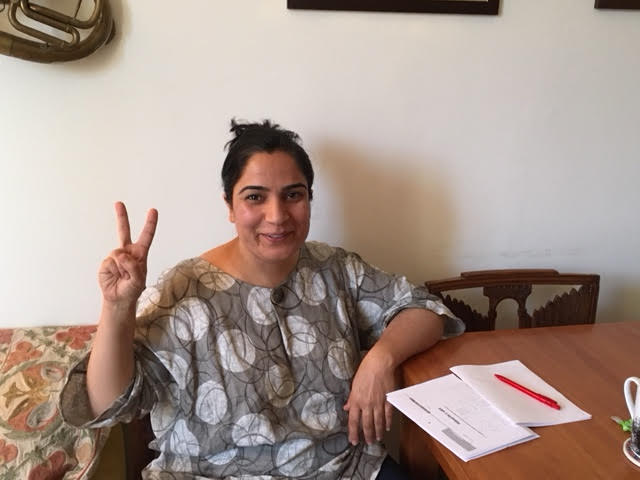 In a meeting at CAM Garibaldi in Milan, you often talked about the need to unmask the false democracy brought by the US to Afghanistan. Can you further explain this point?

This democracy is false because the Afghan people had no say in how it was implemented, as it was imposed on us. The “democracy” of the US was not just an invasion, but also a propaganda war. No nation can give liberation to another- there must be self-determination. Secondly, extremism and extremists have remained in this false democracy, as the government is controlled by, which are just photocopies of the Taliban. They control the country by restricting freedom yet holding fraudulent elections to make it seem like there is democracy. The west largely falls for this mask of false democracy, as they recognize and interact with the warlord leaders, even inviting them to the UN.

Democratic values have been betrayed, human rights violations are ongoing, corruption is rampant and opium production is increasing, resulting in a huge increase in drug users (including 100,000 children). So many people in Afghanistan end up saying, “If this is democracy, we don’t want it.”

You also said at this time there are four enemies in Afghanistan: the Taliban, the foreign occupiers, the warlords and ISIS. What can be done to combat them?

These enemies all come from the root cause of Imperialism and Fundamentalism. Foreign occupiers and governments that have brought war and occupation have also created and supported extremism. Extremism relies upon the control and fear of the Afghan people as well as foreign funds. Education is a key tool to combat extremism, because through education people can understand their identity and their economic and educational capabilities. Once people learn of the true barbarism of the Taliban, warlords and ISIS (who only differ in name, but commit all the same acts of barbarism) and that foreign occupiers in various ways have supported them in different periods of conflict, the people will not stand for this. This is why extremists often target schools and students- they are threatened by an educated population as the uneducated are easier to control.

You described the situation of women as “a hell”. Yet at the same time, there are initiatives and projects to support their rights. Can you explain more about this?

Unfortunately, the common image and story of Afghan people, especially women, is one of oppression. It is true we have very limited rights and suffer from oppression, ignorance and violence, but there are many brave women and men fighting for freedom. These stories need to be told to show Afghanistan in a positive light so that people of the world believe in us and support our struggle. Organizations such as Rawa (Revolutionary Association of the Women of Afghanistan), whose founder Meena was assassinated by fundamentalists in 1987 in Pakistan,  Opawc (Organization of Promoting Afghan Women’s Capabilities) and  Spa  (Solidarity Party of Afghanistan)  aim to spread education and resources to women. There are also other local initiatives such as music programs. The progressive women behind these organizations and activities need support and their stories to be shared, as they risk their lives to bring resources to their people. When brave people like them raise their voice, this is democracy.

You are finishing up your round of meetings in Italy. What was the aim of this trip?

Since 2003 I have received various invitations to speak around the world, and I carry the message of my people. My voice is their voice. I always bring our request of solidarity for the people of the world to support us and to hear our true story, instead of the narratives and lies in the media. We need to awaken consciousness in the West, so they can critically examine the role of the US/NATO foreign occupation and their governments’ own participation. We also need practical support from abroad for education initiatives, for example, so I bring this request as well on behalf of my people.

What can we do as activists, and as people who are in general against any form of violence, to help your fight in Afghanistan?

Elect honest politicians. Educate yourselves. I want journalists to cover what is truly happening in the country, including positive initiatives such as the work of RAWA, so the stories are not always about oppression. Journalists also need to challenge the narrative of the US/NATO’s “liberation” of Afghanistan and explain that we are not free. I want activists to pay attention to and support all of the people fighting around the world for their liberation, such as the Palestinians and the Kurds. I am so hopeful from the success of Kurds fighting ISIS and fighting for self-determination, and we must learn from them. I want activists to understand that the victory of Palestinians or Kurds or Americans resisting Trump is a victory for us- their victory is our victory. When the people truly have the power- this is a victory.

After your condemnations, you have been living in hiding for some time. What gives you strength and hope to continue your commitment as a human rights activist?

My consciousness is awake, and the truth drives me to continue. I have to spread the truth about Afghanistan and awaken the consciousness of people. Knowing the sorrows and pain of my people makes me tireless, as it is my responsibility to fight for them. I am not the only activist who lives like this, there are many others. The solidarity we all receive from around the world and the support of intellectuals and activists such as Chomsky help us know we are succeeding in fighting this political silence on Afghanistan.  In addition, Afghan historical figures and other notable figures such as Martin Luther King, Charlie Chaplin and John Lennon are a source of inspiration for me.

What role and value does nonviolence have for you?

I am strongly against guns and violence. I believe that you have to put the gun aside to build a country, yet those in power in Afghanistan talk through the barrel of a gun. I will give an example that explains my current situation as a believer in nonviolence while living in hiding: despite hating guns and the oppression of burkas, I now rely on their protection as an activist. I have bodyguards and must use the burka so people who want to kill me cannot recognize me.

Justice is as fundamental as food and water. Every single Afghan person deserves justice, as every single one of us has lost someone or been affected by the violence. Terrorists, extremists and warlords must be prosecuted for there to be justice. In the hearts and minds of Afghans, these people are already prosecuted, but there must be practical prosecution. Not only warlords need prosecuted, but also those who promoted, perpetrated and prolonged the invasion, such as Bush and Obama. Right now there are peace processes, but warlords are invited to have a say, which is not justice. It is important to remember that peace without justice is not real peace. Foreign occupiers must leave the country and the Afghan people must set up their own secular democracy for there to be justice.

In your opinion what kind of effect have international development organizations and NGOs had in Afghanistan?

International NGOs are mostly corrupt, money often stays in their pockets instead of fully serving the Afghan people. I think Western NGOs are used as tools to justify their governments’ occupation of my country. Their work has also introduced another enemy to the country: privatization. There are now schools and hospitals, thanks to collusion between government ministries and NGOs, which are profit-making projects too expensive for the average Afghan to utilize. It is very painful for me to hear praise for NGOs and the West for bringing “security” to Afghanistan, as it remains a very insecure and violent place.

I strongly believe in the power and work of honest, local Afghan organizations such as RAWA and OPAWC.

We note with great sadness that on the day of Malalai’s return to Afghanistan, there were two deadly terror bombings killing civilians, journalists and photojournalists. This is the daily hell Malalai and the Afghan people continue to face.