The nerve agent attack on the former Soviet double agent Skripal and his daughter on British soil has reached unimagined proportions: the culprit is quickly identified by Western governments and media: it must have been Russia, because the nerve poison was developed there.

Sanctions are imposed, and the German government hastily takes the side of the accusers, who seem to have already reached their own verdict. Without a thorough investigation of what happened, without any scientific evidence.

But due to the megaphone-like spread of blame, half the world is now convinced that Russia’s President Putin must be behind it himself. Not a trace of responsible taking of evidence and objective consideration of the facts.

The nerve agent Novichok is actually Russian-made. However, the formula was already published ten years ago by Vil Mirzayanov, a scientist who defected to the USA and who was involved in the development of the neurotoxin at the time, in his book “State Secrets”.

This information is not secret, but publicly available on the internet: In a post on the Twitter page of the Russian Embassy in the UK, Mirzayanov says clearly: “I have published the formula for Novichok in my book in 2008”. 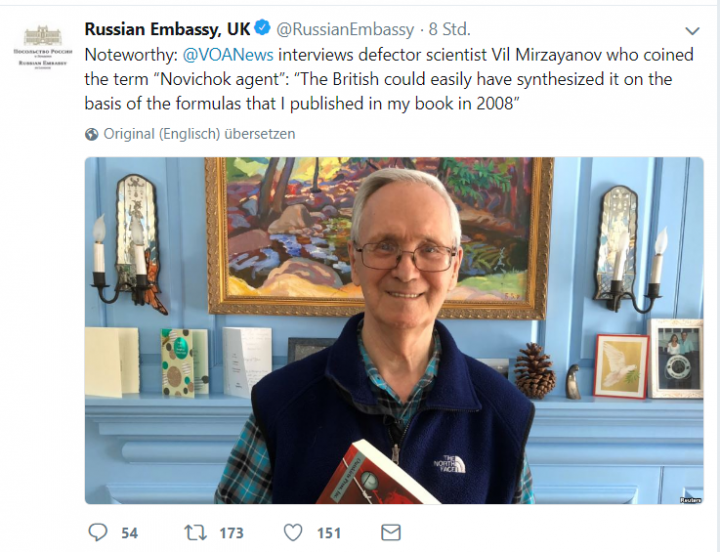 The book is also very easy to buy on the Internet, interestingly enough at Amazon.com without content summary and without comments, but if you look for it on Amazon.de, you can even get both in English.

In an interview published on Voice of America, Mirzayanov adds that this is precisely why he published the formula to prevent its misuse (as in the Skripal case) and that since 1992 he has worked towards getting Novichok included in the list of officially banned chemical weapons maintained by the international organization OPCW (Organisation for the Prohibition of Chemical Weapons). Both Great Britain and Russia are members of the OPCW as signatories to the Chemical Weapons Convention.

In a recent interview with The Guardian he added that he does not believe that “non-state actors” have the knowledge and technical means to produce Novichok themselves. In this way, he implies production by a government or government-related organization.

The Russian representative at the OPCW, Alexander Schulgin, on the other hand, recently told Interfax that it is “highly likely that the poison used in Salisbury comes from a Western laboratory”. (Source: Deutsche Welle).

Former British ambassador Craig Murray explains in an article on the topic that Novichok has already been successfully produced in Iran 2016 – in full cooperation with the OPCW, and that the nerve agent used in Salisbury could only be traced back to Russia with a comparative sample.

In his opinion, this is also the reason why the British chemical experts at Porton Down refused to give in to pressure from their government to declare that the nerve poison was of Russian origin: “If Iran can produce Novichok, so can a significant number of states,” Craig said literally.

Russia had asked for a sample on 13 March to help solve the case, but so far the UK has refused to do so.

It seems that Western politicians know exactly what dangerous ground they are on. According to an article in Russia Today, this is also the reason why Prime Minister May, her ambassador to the United Nations and her foreign minister always only ever speak of a nerve agent “of the type developed in Russia”.

This wording was also included word for word by Germany in its joint declaration with Great Britain, France and the USA, which accuses Russia of being responsible for this attack “with high probability”.

However, given the facts mentioned above, the question arises where this high probability should come from. Where’s the evidence? And what role do Western media play who take on everything so rashly? Where is their investigative research?

In fact, the behaviour of our Western governments and media raises more questions than answers, especially as it brings the whole world yet again dangerously close to a military escalation.

Meanwhile, at least one German politician has made a sensible statement on the incident: At his first appearance as former Foreign Minister, Sigmar Gabriel pleads for restraint and demands that the rule of law of the presumption of innocence be observed. Does one first have to be off duty to act with a cool head and reason? It seems so.