Millions, yes, millions of devotees converge in the navel of Manila, Quiapo, every January 9 to celebrate the Feast of the Black Nazarene.

Once a year, the streets of downtown Manila along the route of the Traslacion is transformed into a seething, swarming mass of barefoot devotees who re-enact the 1787 transfer of their revered statue of the black Suffering Christ from its original site in the Augustinian Church in Intramuros to the Basilica of the Black Nazarene in Quiapo where the wooden statue resides. The image, aloft on a carriage called Andas, is pulled on ropes by devotees and makes its way through cramped, twisting streets. Thousands upon thousands of Filipinos accompany the procession, jostling each other for the chance to touch the ropes and help pull the Andas or even touch the statue itself, while more people line the streets waiting for a glimpse of the revered statue to pass. Part of the ritual is the “pamamasan”, done either by the actual carrying of the “Andas” which is a platform without wheel or by the pulling of the “Carrozza” (platform with wheels) through a pair of abaca ropes, the ropes acting as a “virtual cross” to the devotees who are unable to get near the statue.

According to the Plaza Miranda Police Community Precinct (PCP) monitoring the Traslacion 2018, over 4 million Filipinos from all walks of life joined the procession this year. And the estimate reaches a total of 16 million to 18 million devotees if the count includes the people who visited Quiapo and those who participated in the “Pahalik” (Kissing of the statue) at the Grandstand. A midnight mass was celebrated by the Archbishop Tagle and the procession took a grueling 22 hours before it ended in the early morning hours of the next day, with the statue back in its place at the Basilica. Similar Traslacions were held in other cities nationwide while local TV and radio stations gave a blow by blow account throughout the day for those who may not have been able to join.

Why do millions of ordinary Filipinos take part in this exhausting pilgrimage? The procession is a frenzy of people from different walks of life, risking life and limb just to get close to their revered “Poon”. While a majority are from the lower classes of society, having vowed (called a panata) to take part in this feast every year, devotees attest that during the procession they all feel as one body, united in their love and devotion, regardless of age, class or gender. Whether they come from different social classes, devotees of the Black Nazarene believe the statues bring miraculous healing and, material and spiritual blessings.

Key to this phenomenon is the suffering of Christ. Devotees identify intensely with the image of Christ bearing the heavy cross, symbolic of their sufferings and hardships, yet looking upward, undefeated, with hope. By walking barefoot during the procession, helping to pull the carriage, kissing the statue and wiping the sweat of those pulling, they take part in the sufferings of Poon Nazarene. Suffering together with their Poon is an expression of their devotion and to this image, they ask for courage to carry on against “suffering” caused by poverty, corruption, diseases, crime, injustices among others. By doing so, they believe that their prayers and wishes will be granted.

Touch is the core experience of this Feast. Devotees of the Black Nazarene believe, and many from experience, that touching the statue has the miraculous power to grant their wishes and to help them in their daily lives and struggles. Many testify from their own experience that their wishes were indeed granted, thanks to their deep devotion and love for the Black Nazarene. Devotees pray for good health, for themselves and for their loved ones, some testify that their ailments like cancer were indeed cured which they attributed to the Nazarene’s healing power. They pray for the safety of their families, help in finding jobs or livelihoods, for guidance and renewal. Many ask for forgiveness and even solutions to social issues. 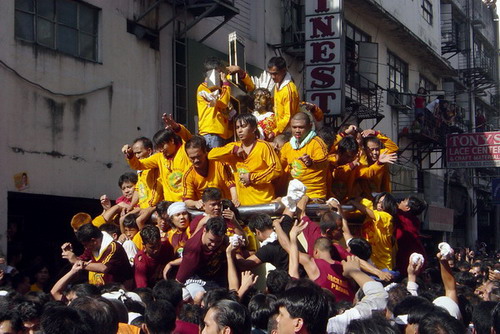 The experience of taking part in this can be difficult for non-believers to understand. Many devotees relate that once you get to hold the rope or any part of the Mahal na Poong Nazareno, you feel uplifted like all your problems vanish. They felt exhilarated, enlightened about their faith. According to some, you felt a different kind of energy, something had changed inside, something hard to put into words but strong enough to make them come back again.

The panata or vow that the devotees make comes from deep within, like an internal force that moves the devotee and they point out that their devotion is a manifestation of their “kalooban” (what lies within).

While many come with their prayers and intentions, others come each year just to be with their Lord and to give thanks, which make them feel happy and content, full of hope. This sentiment is echoed in Manila Archbishop Luis Antonio Cardinal Tagle’s homily during the Traslacion Nazareno Fiesta Mass. He said, “Huwag panghinaan ng loob dahil merong nakikipaglakbay sa atin – si Hesus, kasama natin sa mga Traslacion ng ating buhay,” (Let us not lose heart because someone is journeying with us – Jesus, who is with us in the Traslacions of our lives.) 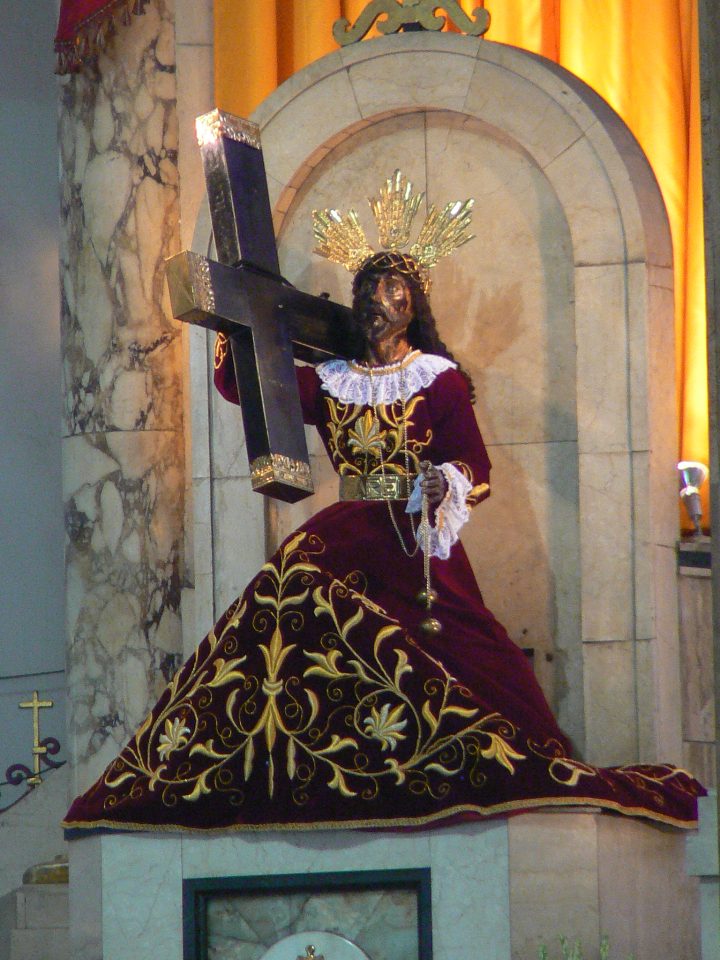 Who is the Nazarene to the devotee? Devotees have described their relationship to their “Poon” in many ways– the center of our life, total hope and faith, there to give inner strength and hope to face the tests in life, someone who gives hope and direction in life… To him, they raise their prayers and hopes with deep faith and conviction that their God will surely grant them his mercy, knowing that “Nasa Diyos ang awa, nasa tao ang gawa” (Good grants mercy, but it is up to the person to act.)

The intense devotion, the sincere piety of devotees, the adrenalin rush, and energy generated by the crowd can be deeply felt. Any person who has watched the procession does not remain untouched.

Is it fanaticism? Idolatry? Superstition? Or an expression of a deep religiosity that runs in the veins of Filipinos?

While I have never personally experienced the Traslacion, having watched this phenomenon unfold on TV, reading reports and hearing first-person accounts, I glimpse the deep religiosity that sustains and nourishes the Filipino spirit. I believe it is that religiosity, a deep feeling almost bordering on a folk mysticism, a strong native faith wrapped in the cloak of folk Catholicism, from which springs the Filipino resilience and optimism in the face of adversity and difficulties.

Thanks to the symbol of this unique statue of a “half-knelt, half-standing” image of a suffering Christ with its heavy burden on his shoulder, carved from wood painted dark brown and having travelled all the way from Mexico on a galleon centuries ago, the believer, feels capable of standing up every time he falls, just as the promise of God to His people.