There are few moments when in the midst of what appears to be the hopeless political situation of a dehumanised society something unexpected happens, something that shows that at least some people have managed to wake up from the hypnotic dream induced by the prevailing system.

It happened in Bolivia, when against all odds Evo Morales was given the mandate that has transformed the poorest economy of Latin America into a place of hope, acknowledged even by neoliberal analysts.

It happened in the UK, when Jeremy Corbyn and his team defied most doomsayers and managed to position his party as a powerful force with coherent proposals now being studied worldwide as the way out of the crisis induced by years of “free” market dogma and austerity.

And now it happened in Chile, where the Broad Front, given no more than 8% vote in the pre-election polls, managed to achieve 20% of the electorate, becoming the third political force, with members in the National Congress and regional governments. The presidential candidate Beatriz Sanchez denounced the negative campaign of the media, as she came up only 2% behind the candidate that will compete in the second round. She could have been in the second round had it not been the message from polls and media that the Broad Front was so far behind that support for them would have been a “wasted”vote. 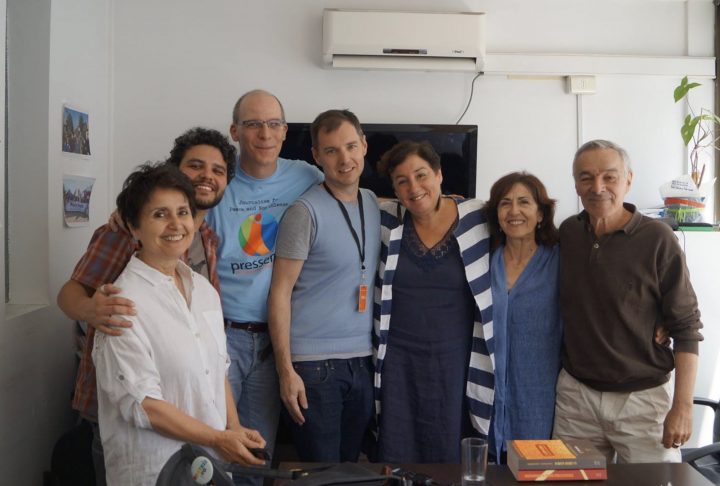 Beatriz Sanchez (3rd from R) with an international Pressenza team

One of the newly elected deputies for the National Congress is Tomas Hirsch, for the Humanist Party, one of the forces that formed the Broad Front, ex-presidential candidate and author of the book “The End of Prehistory”. His book is both a prediction and an explanation of the phenomenon. It states:

“The change will be produced when the intentionality of individuals and peoples is set in motion and actively corrects the direction of the process.
But the feasibility of such a mobilization is linked, necessarily, to a simultaneous inner transformation — the modification of the belief system. This, because as long as each of us continues to experience themselves as a passive object, pushed and pulled by forces we cannot control (which is what they tell us we are), then no intentionality will be set in motion, or any change produced. In short, change will happen when the human condition is revalued as active consciousness, whose destiny is always to transform itself and the conditions in which it lives.”

The realisation that we are fed hypnotic dreams of fame and fortune as the meaning and objective of our lives leads to this active awakening. Until then we are limited by the mechanical input that formed us, exemplified by this Simpsons’ joke:
“Look, danger approaching from 10 o’clock”.
“I don’t know what that means, I have a digital watch”

Having thoroughly dismissed Fukuyama’s contention that humanity had reached the end of history with liberal democracy, Silo proposed that an active consciousness was required to emerge from Pre-history leaving behind violence, discrimination, the emptiness of provisional meanings and the appropriation of the social whole by a ruthless minority. This is the point of Hirsch’ book and the political campaign that took by surprise most political analysts.

Perhaps this is the element to pay attention to. When the “unexpected” happens it is either because the population was already way ahead of the analysts or because the “experts” were biased against radical change and were manipulating figures to prevent it. Or both. In the case of Jeremy Corbyn this has been denounced even by the “committed to be neutral” BBC’s own employees. Chile will have to investigate in depth this possibility. In the meantime the Broad Front is left with the delicate decision to support the neoliberal centre to prevent once more the rise of the Pinochet’s heirs of the right in the second round or be blamed for the consequences of the latter.

They seem to be clear though that their most important task is to prepare to give the country an even bigger “surprise” in four years time.