In September you spent eight days on the Aquarius ship of the SOS Mediterranée NGO, engaged in migrant rescue operations with the help of Doctors without Borders and you defined it as “one of the most important experiences of your life.” What impacted you the most?

Certainly the mix of humanity and professionalism of people (most of them between the ages of 20 and 40) who spend months saving people who are fleeing desperate situations and their ability to remain calm in difficult and complex situations, which could also degenerate, because you never know what can happen with the Libyan Coast Guard. For me these operators are the best representation of what it means to “stay human”. And then the happiness, the sense of relief, and I would say the rebirth of someone who feels secure after months of hell, which alleviates so much of the suffering from the violence endured and people lost on the journey. I was able to learn firsthand the issues of my work as a journalist and educator, and this has multiplied my civic engagement a thousand or even one hundred thousand times over. 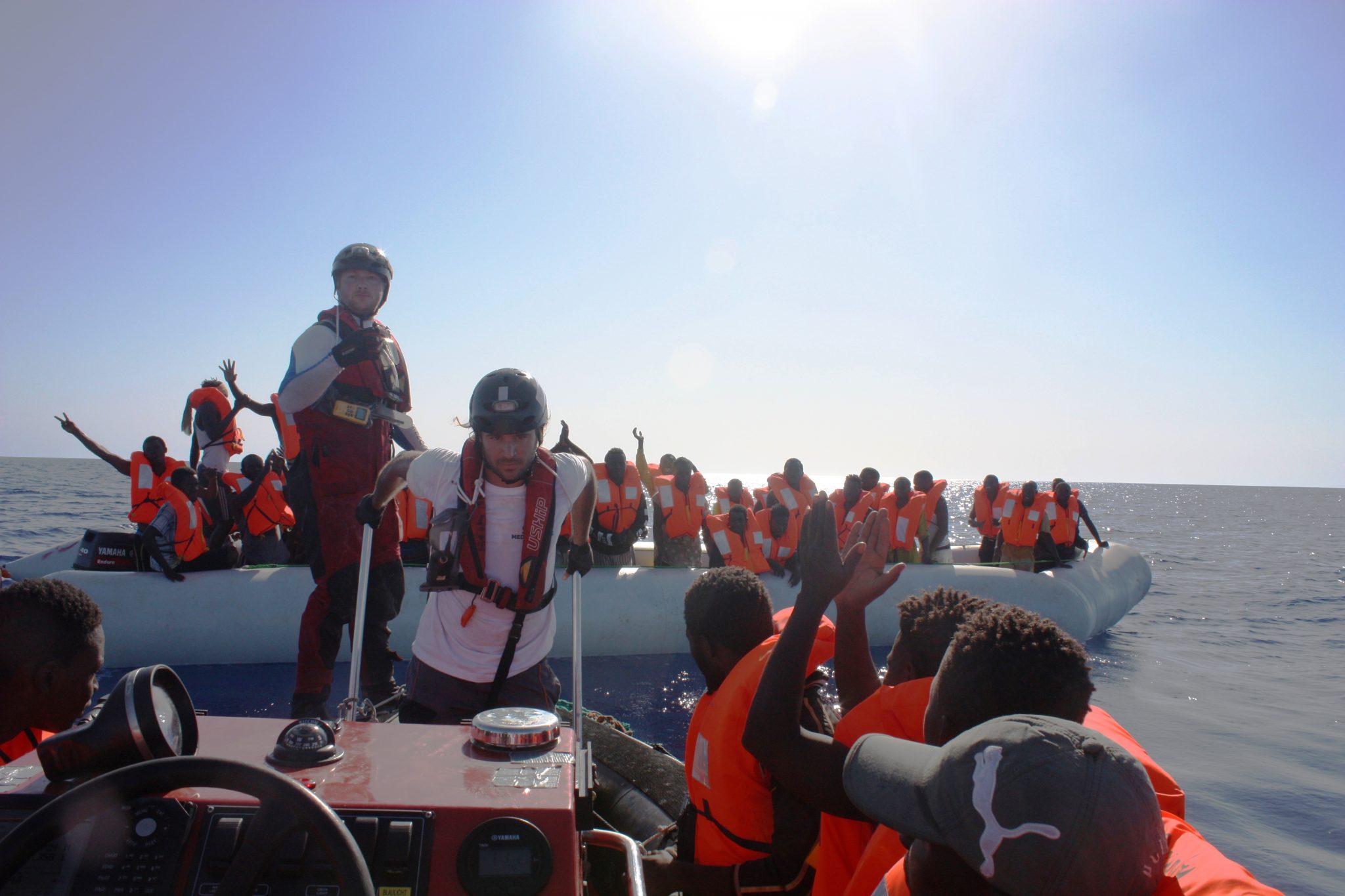 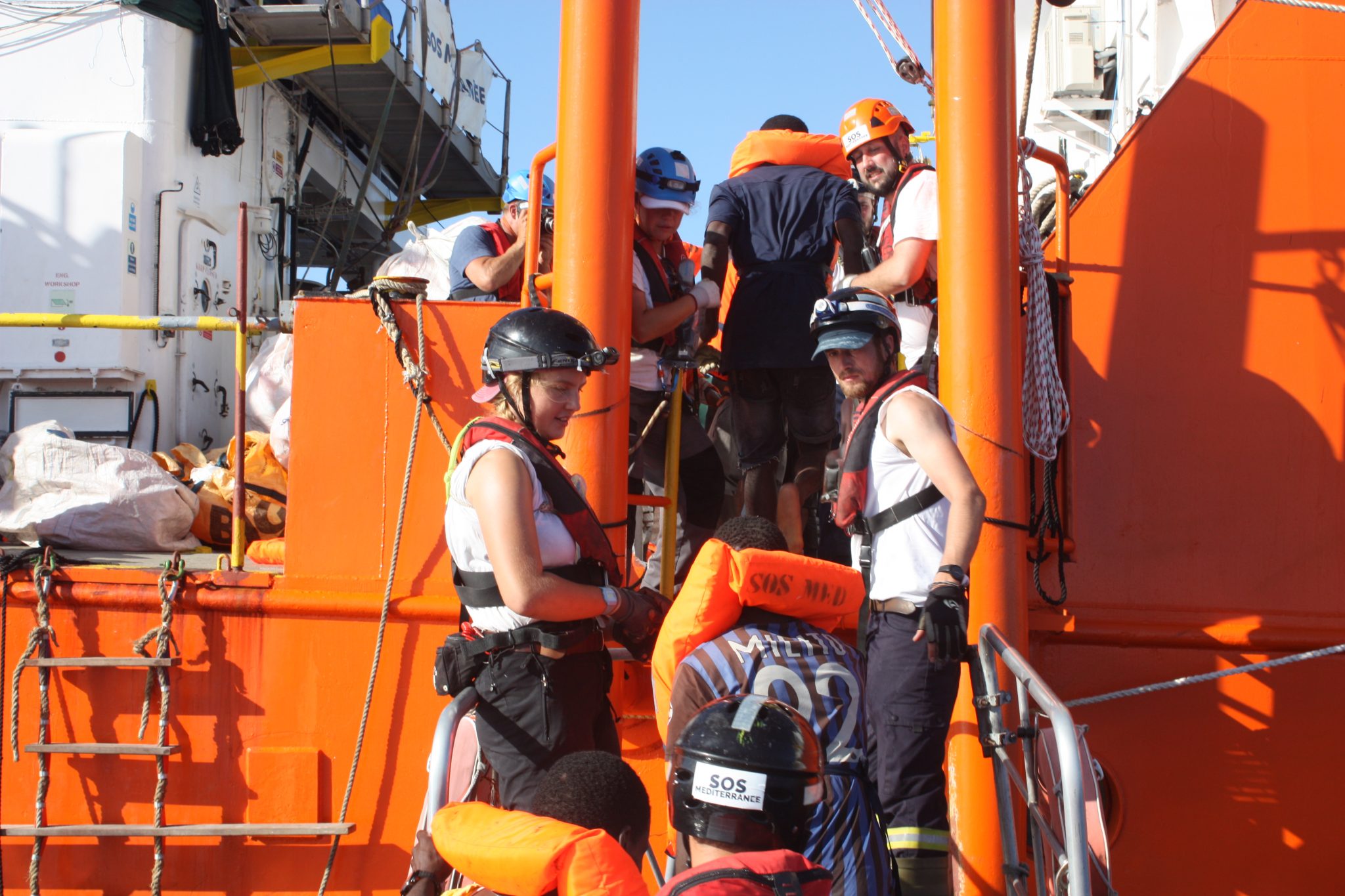 Since May, when your book “The Island of the Righteous – Lesbos, Crossroads of Humanity” came out, you’ve presented it in countless presentations around Italy. How was this experience?

At the heart of the book is the theme of the Righteous, those who follow their own conscience and who help others, even breaking the law when it is unjust. I tell the story of those who are saved, but above all I talk about those who save others at the cost of personal risk and difficulty and I provide elements to understand who they are. Each one of us can be a Righteous, by perhaps using dialogue, knowledge and mutual respect to solve small situations in our own places. The presentations have always been well attended, with so many questions from audiences that are often hearing this for the first time, and say they have the possibility to overcome fears induced by misinformation and the incessant media campaigns against migrants.

And speaking of the Righteous, I would like to mention two extraordinary people who I was fortunate enough to meet: one is a well-known French radio reporter who was with me on the Aquarius, Raphaël Krafft, author of the book Passeur, which tells the story of his civil disobedience, when he helped two young people from Africa cross the border between Italy and France and the other is the Ticinese parliamentarian Lisa Bosia, who I’ve known for a long time and met again a few days ago during my participation as a moderator at the Lugano Human Rights Film Festival. She was arrested and fined for assisting refugees cross the border between Italy and Switzerland – for what is now known as the anachronistic “crime of solidarity” – but this has not diminished her humanitarian action, as of now she is organizing a March for rights and dignity: backed by the largest organizations dealing with rights and reception, from 14 October to 10 December 2017 the march will cross Switzerland, reaching small villages and big cities with volunteers and representatives from migrant communities.

Your work has also brought you to schools

Yes, since 2016 I’ve participated in the project “Con altri occhi” (“With other eyes”) by Aeris, a social cooperative in Monza-Brianza, and I go to talk about migration in schools starting from grade four. We meet twice, each meeting lasting two hours: in the first I explain, using photos and data, where migrants come from and what situations and conditions they run away from as to dismantle myths and fears of invasion induced by the media and some politicians. I help the kids to identify with them through simulations like asking the 5 things they would take with them when taking a boat or a raft to an unknown destination. In the second meeting I am accompanied by a “witness”, an asylum seeker or a refugee who has traveled, has been here for a while and speaks good Italian and they “interview” him/her by asking questions. At the end, they write a comment on a piece of paper about what has stuck with them from the two meetings (we have collected 4,000, as many as the students we met during the last school year) and the feedback is great: fears overcome, simple phrases that dismantle misinformation and prejudices. In addition, the witness comes from the area; so the kids see him, invite him to parties and meetings and the ties are strengthened.

At the end of last year we organized an art contest, receiving around 300 elaborate pieces of poetry, drawings, sculptures and videos. This year we’ll repeat the course and there is already a lot of demand, even though school just started a few weeks ago. It’s a wonderful experience for me, which allows me to combine my two passions, journalism and education.

What role can independent journalism play to counter the racist wave that is sweeping much of the media, political forces and public opinion?

There is a need to tell stories, to dismantle the mechanisms of misinformation and non-knowledge, to create opportunities for encounters and confrontation, and also to act on concrete issues, on practical situations, focusing on dialogue and coming together. There are so many networks that are working every day for this. The task of independent journalism is not just to talk about their activities, but also to link the various areas of interest and let them know each other.

Translation from Italian by Liane Arter