However, the threats of North Korea’s to release a nuclear monster are daily news. AS are the threats of the United States. The policy  restricting nuclearweapons to 5 powers, the United States, Russia, China, France and the UK has already failed. There are now other nuclear powers: India, Pakistan, Israel, North Korea, with Iran any time soon. There is no logic that can justify a few countries having a nuclear bomb and others not. No matter how much we ridicule the North Korean leaders, they threaten world peace as much as the other countries mentioned. This has to end and there is only one way: global and total nuclear disarmament. This seems naive, and it is until we becomes aware that we are one humanity and there are limits on the capacity for destruction that we can not transgress. “Global and total nuclear disarmament” is an aphorism that we can subscribe to and communicate to our immediate environment, our schools, and our parliaments. Let it become common sense. Global and total nuclear disarmament, is a reflection for each one of us so as to decide if it deserves to be embraced as a worthy cause.

There is no other way for humanity, the restrictions imposed by the United Nations Security Council have been broken already. Soon others will appear who will believe that they also have nuclear rights.

The socio-political analysis of the paranoid psychology of Trump or Kim is not so interesting. The underlying problem is not the North Korean nuclear tests, but nuclear weapons themselves. It is not a right that a country has or not, the issue is that nuclear weapons should be banned for all. To have the bomb as a deterrent so that the other does not attempt to drop one at me was a sustainable argument in another technological level; it is not anymore. We now require an anti-nuclear consciousness  to curb any such adventure. Global and total nuclear disarmament is the project that must unite all of humanity. 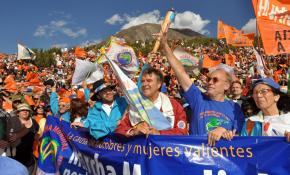 On October 2, the day of nonviolence, Gandhi’s birthday, the anniversary of the first World March for Peace and Nonviolence, is a good day to raise awareness.

I want to leave with an internal requestrian and invite others to accompany me:
I take a breath of air that I carry into my heart, and I ask strongly for global and total nuclear disarmament. I ask that people of all races, of all ages, of all creeds and cultures, of all genders, join together for a moment to ask for global and total nuclear disarmament. May Peace occupy my heart and violence recede from my life. I ask to feel the presence of those who die because of wars, and of those who flee seeking refuge and solidarity. To finish this request, I imagine in the future human beings of all peoples and nations, free and united building the new world.