Thousands of Israelis and Palestinians participated in the alternative memorial ceremony organized annually by Combatants for Peace and the Bereaved Parents Circle, two distinguished Israeli-Palestinian peace movements, to pay tribute to the fallen on both sides of this bloody conflict on the eve of Israel’s official Day of Remembrance. This year, in the wake of Israel’s refusal to issue permits to the Palestinian participants, the ceremony took place in Tel Aviv and was broadcast live to large audiences in the West Bank town of Beit Jala as well as in cities across the world.

Outside the Tel Aviv venue, a hoard of aggressive nationalist activists chanted hate-filled slogans and later turned violent, hurling blunt objects and bags of urine at the departing participants.

In reaction to the reports, a tweet attributed to Minister of Education Naftali Bennett said that people who mourn “baby killers and bus bombers should be a little less sensitive to spitting, shoving, and water.” Although Bennett later claimed that he had not authored the post, he has been dismissive of the uproar it created and continues to vilify the ceremony itself.

This is symptomatic of the Israeli Government’s systematic demonization of peace activism in Israel, and it is no coincidence that it comes on the heels of Prime Minister Netanyahu’s refusal to meet with the German Foreign Minister because his itinerary included meetings with Breaking the Silence and B’Tselem. Thankfully, Minister Gabriel refused to be coerced.

With its delegitimization of the activities of Israeli human rights and peace NGOs, the Israeli Government is directly responsible for this worrisome atmosphere that is reminiscent of that which led to the murder of peace activist Emil Greenzweig and the assassination of Prime Minister Yitzhak Rabin.

We believe that it is incumbent upon every head of state to warn the Israeli Government that this situation will not be tolerated. Israel is sliding fast into the abyss. A wake-up call from the family of nations is due. Please help us in realizing it.

The Joint Israeli-Palestinian Memorial Day Ceremony was first held 12 years ago in a small, alternative, self-organised event and has since been growing every year.

Memorial Day is a national holiday in Israel, dedicated to those who died fighting on behalf of Israel or the pre-state Jewish community, and to Israeli victims of political violence. It plays a prominent role in the Jewish Israeli society – official commemoration services are held in the presence of Israel’s political and military leadership, and private memorial gatherings take place all over the country.

These events have become a powerful tool for shaping a one-sided, nationalist narrative of sacrifice. These ceremonies try to justify the political status quo and ignore the fact that violence has taken the lives of thousands of both Israelis and Palestinians over the years.

The main statement made by the Joint Israeli Palestinian Memorial Day Ceremony, founded by Combatants for Peace 2017 Nominee for the Nobel Peace Prize and the Parents Circle Family Forum, is that as long as we separate our pain and loss and do not recognize each others’ pain and loss, there can be no end to violence.

Combatants for Peace wrote on April 30:

“Dear friends, this year the trends of radicalization and intimidation have reached a new peak with regard to our Memorial Ceremony. Many obstacles have been placed before us to prevent our Palestinian activists from getting to the ceremony we have been holding together for 12 years. Despite all our inquiries on the political and legal level, our requests for entry permits to Israel were refused. The mechanisms of separation and intimidation and the hateful public discourse are strong, rejecting the hand extended to peace from the other side.

Nevertheless, attempts to frighten, silence, and separate us do not make us forget that change can only occur when we are together. We will hold the ceremony tomorrow as planned. At the same time, we are preparing for the participation of all the Palestinians who did not receive entry permits to the main ceremony, at a gathering in Beit Jala, the West Bank and broadcast from there to the Tel Aviv event, so that we can commemorate together the memory of our loved ones and call for peace, reconciliation and hope together. Because change is in our hands and war is not a act of fate.”

Over the years it has aways been a challenge to recieve permits for the Palestinian activists to come to the ceremony in Tel Aviv. This year, after an incident in which a Palestinian teen injured four in a stabbing attack on Tel Aviv’s beachfront, Avigdor Lieberman, the Israeli Defence Minister, himself a settler living in the occupied West Bank, has frozen Palestinian permits until further notice and has declared a curfue until the end of the Israeli Independence day on Tuesday night. We see this as a structural maintanace of the us and them narrative, a narrative that teaches conflict and oppresses the effort to challenge these through mutual acts of constructive work towards peace. “ 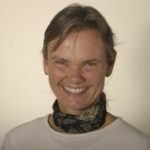 Ina Darmstädter
Is engaged since 2001 in diverse peace projects. She has organised seven peace festivals in Berlin, directed Israel-Palestine cooperation projects and founded the association of the Friends of the Parents Circle Germany. In the moment she travels through Iran and Israel-Palestine, organises with other women projects like the March of Hope 2016, and in future a women summit in Berlin, a peace forum for Germany and a peace plan with women in Israel-Palestine.