To understand the situation of today’s Middle East, it’s necessary to review a century of history. It’s necessary to go back to the aftermath of the First World War to see a large part of the geopolitical data that explains the multiplicity and entanglement of the present conflicts. One thing is certain, if the great powers have long decisively influenced the course of events, regional and local actors have been increasingly asserting themselves throughout the century. After the domination of Great Britain and France during the interwar period, the two superpowers of the Cold War took over. After the fall of the Berlin Wall, the phase of American omnipotence was called into question after September 11, 2001. The era of globalization saw the regional powers increasingly enlarge their autonomy and independence of action, influence and exacerbate the rivalries between them.

Let us try to see a little more clearly.

Links to the others 2 parts:

Since the sixteenth century the Arab Middle East was included in the Ottoman Empire. This multi-ethnic and multi-confessional empire was ruled by the Turkish dynasty of the Osman and centered on the capital Istanbul. The Ottoman rulers, the sultans, also bore the title of Caliphs, that is to say, religious leaders of Sunni Islam. They controlled the holy places of Mecca and Medina. In the East, they clashed with their great rivals, the Shah of Persia, champions of Shiite Islam. Since the nineteenth century, the Middle East was prey to the struggle for influence between European imperialist powers. Great Britain, Russia, France and, only later, Germany were rivals for political, economic, cultural and even military interference. Egypt had already been a British protectorate since 1882. The Arab-Persian Gulf was brought under control by Great Britain at the turn of the century. Western financial investments multiplied in the Ottoman Empire. Persia started to be exploited in 1908. It was in this context that the First World War broke out, the result of rivalries between European imperialisms.

In November 1914, the government of Istanbul fell in behind the German Empire. During the conflict, Turkey encountered the Russian armies in the Caucasus and the British troops in Palestine and Mesopotamia (Iraq). Allied to Germany during the conflict, the latter was in the camp of the defeated in 1918. The present states of the Middle East, the Arab countries, Turkey, Israel, are largely derived from the decomposition of the Ottoman Empire at the end of the First World War. The winners, the British and French, redrew the map of the region according to their interests. The wishes of the populations concerned were not taken into account, of course. The proxies drew borders, chose the rulers, as the British did in Iraq and Jordan, or administered directly like the French did in Syria and Lebanon and the British in Palestine. In 1922, the League of Nations, ancestor of the United Nations, endowed Great Britain and France with “mandates” for the ancient Arab provinces of the Ottoman Empire. Deemed to lead these territories to independence, the mandated powers treated them as colonies. Thus, in the form of territories under trusteeship, the four states that make up the Arab Middle East to this day appear: Iraq, Syria, Jordan, and Lebanon, to which was added that of Palestine / Israel.

The territory of Palestine was, moreover, open to the Jewish colonization of Europe by the English occupation and organized by the Zionist movement*. The Zionist project appeared like a double-faced Janus when the choice of Palestine was decided: if it wanted to be a national liberation movement for the Ashkenazi populations of Europe, it could only appear as a colonial project for the Arab populations living in Palestine. The Jewish settlement of Palestine, begun by purchases of land from the 1880s, received a decisive impetus when, in the First World War, the British Government published the Balfour Declaration in which it declared itself in favour of establishing a “Jewish national home” in Palestine.

Arabia was the scene of an event with long-term consequences. In 1932 the Kingdom of Saudi Arabia was proclaimed. The Saud family, allied to the Wahhabi monks, seized power in the heart of the Arabian Peninsula and took possession of the holy places of Islam: Mecca and Medina. The small states bordering the Arabian Sea and the Persian Gulf were under British tutelage. The maritime route between the Mediterranean and India via the Suez Canal was thus closely controlled by Great Britain. The prolific oil fields of Iran were operated by the British (Anglo-Persian Oil Company BP, British Petroleum) while those in Iraq were operated by an international consortium (Iraq Oil Company).

Turkey saw the founding of the republic by Mustafa Kemal “Atatürk” in 1923. Its territory corresponded to the old heart of the late Ottoman Empire. The sultanate (i.e. the monarchy) was abolished in 1922, and then the institution of the Caliphate was abolished in 1924. The father of modern Turkey secularized and westernized the state and society on a forced march. The Persian Empire did not participate in the First World War. Nevertheless, it remained prey to the rivalry between British and Soviet interests. A similar attempt of Westernization to Turkey, although clearly less successful, took place in the Persian Empire by Reza Pahlavi from 1925. The country took the name Iran in 1935. These two countries ruled authoritatively tried to maintain a distance both with regard to the Western powers and with regard to the young USSR. It should be noted that the Kurdish population was divided between four states, Turkey, Iran, Iraq and Syria, where it was a minority everywhere and more or less repressed. 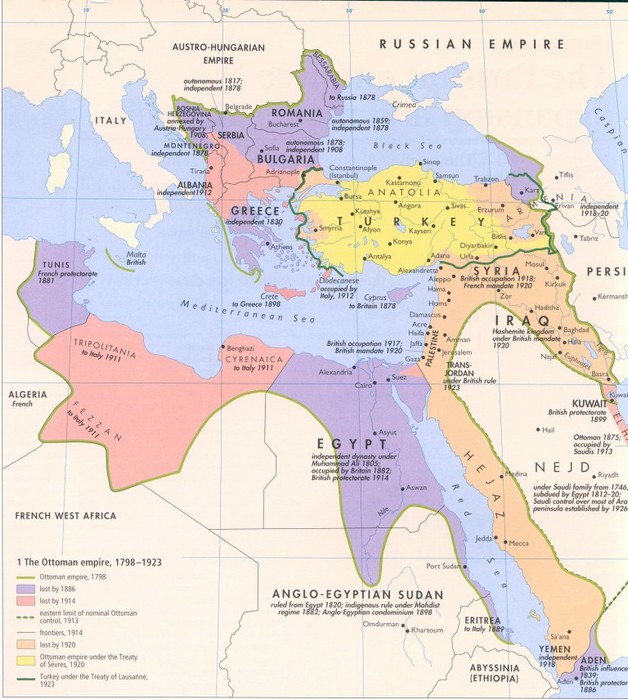 The interwar period was marked by the “formal” independence granted by Great Britain to Egypt in 1922 and then to Iraq in 1932. In 1936 a Palestinian armed revolt was broken by the British occupier and the Jewish militias of the Yishuv, the name given to the embryo state that the Zionist movement was creating in Palestine. France, on the other hand, separated the territory of Lebanon from Great Syria. It suppressed all attempts at contestation by force. The economic interference of the British, guaranteed by the continued military presence, exasperated the nationalists, whether they were secular or religious. In 1928, Hassan-al-Banna founded the Muslim Brotherhood movement, a brotherhood and a political movement in Egypt. The latter wanted to regenerate Islam by returning to its sources, rejecting any influence of the West, whether political, economic or cultural. It sought to re-islamize societies on its own criteria, starting with the social base, while awaiting political power. Secular groups, whether liberal, nationalist or Marxist, also occupied the political sphere in all the countries of the region. In any case, they demanded independence from Great Britain and France.

When the Second World War broke out, Jews of the Yishuv fell in behind Great Britain. The Arab nationalists looked with some sympathy to Germany. Thus Iraq rose with German support in 1941 against the British. It was defeated. French Syria, held by a Vichy governor, was conquered the same year by British and French free forces, in other words Gaullists. While Turkey maintained its neutrality, Iran, which moved closer to Germany, was occupied by the British and the Soviets and forced to stand in the allied camp.

At the end of the First World War, Great Britain and France shared the Middle East. Turkey and Iran, however, remained independent, while in the center of Arabia the Kingdom of the Saud was asserting itself. In Palestine at the same time, the first signs of the Israeli-Palestinian conflict were appearing. This general redistribution of cards took place against a backdrop of petroleum rivalries. The Second World War came to defeat the maps of the region. It prepared the great rivalry of the Cold War, of which the Middle East was an essential issue, as we shall see in the next episode.

* It was founded in 1897 and aims to provide the European Jewish population with the rise of anti-Semitism (pogroms in the Russian empire, Dreyfus affair in France), land and to found a Jewish state there. The choice was made for Palestine, a land that had seen the successive development of different Jewish kingdoms in the course of antiquity (kingdom of David and Solomon, rival kingdoms of Israel and Judah, the Hasmonean kingdom, Herod).

Olivier Flumian
After studying History and Geography, then Sociology of Sustainable Development, I worked for a long time in Professional Training. At the same time, I volunteered in International Solidarity projects in Burkina Faso. Philosophically and spiritually I recognize myself in the ideas of Universalist Humanism. For some years now I have been working as a radio host, and I collaborate as a journalist for Pressenza. I am interested for example in the questions of Degrowth, Communalism, Economy of Gratuitousness, Universal Basic Income, Agro-ecology, Cities in Transition, Active Non Violence, Nuclear Disarmament, but also in Philosophy, Spirituality and History of Civilizations. olivierflumian@yahoo.fr