Denmark announced on Friday 2nd of December, its decision to suspend military operations of its seven F-16 fighter jets in Syria and Iraq. A few days beforehand, a military investigation indicated that Danish fighter jets were involved in a September 17th airstrike by the coalition, in which a series of “unintentional human errors” killed fighters aligned with the Syrian government instead of targeted Islamic State (ISIS) militants.

After Canada (February 2016), Denmark is the second member of the so called “coalition against ISIS” to withdraw its participation in airstrikes in Syria and Iraq, whose legal basis is not as solid as argued by France, The United Kingdom and The United States. It must be recalled that since August 2014, the so called “coalition against Islamic State (ISIS)” led by the USA has been bombing Iraqi and Syrian territories. In the case of Syria, without the consent of Syrian authorities: this last point is a key issue, from an international legal perspective and the United Nations Security Council.

Last Friday December 2, Denmark officially announced that it will suspend its participation in airstrikes on Syria and Iraq. In this story in The Local, we read that Danish Foreign Ministry Anders Samuelsen said, “We have decided to withdraw the Danish fighter jets as planned“. A few days before, top officials from United States recognised errors in recent operations, and in this story in The Local, it can be read that: “Defence Command Denmark, the command centre for the Danish armed forces, released a short statement following the attack that confirmed that Danish fighter jets were part of the mission. The Danish forces said it was “of course unfortunate if the coalition mistakenly struck anything other than ISIL forces“.

The results of this particular mission in Syria were the following, according to this note of September 19, 2016: “British, Danish and Australian warplanes took part in the U.S.-led coalition’s airstrike Saturday that reportedly killed more than 60 Syrian government troops and threatened to unravel the “cessation of hostilities,” military officials said Monday. The Syrian army and a key rebel leader declared that the cease-fire had collapsed and blamed each other for violations, but U.S. Secretary of State John Kerry said he was working for a possible extension of the seven-day-old cessation period that ended Monday“.

Last November 30, an article published in Australia stated that: “The United States-led review into the air strike released early Wednesday morning highlights two key points about the international coalition air war over Syria: first, that even the best planned military campaign will make mistakes and kill innocents, and second, that the Coalition air campaign has been one of the most tightly controlled in the history of air power. The remarkable thing is that more people haven’t been wrongly killed by Coalition strikes. This constraint on air operations is legally and morally right, but the effect has been to render much of the Syrian air campaign useless. The review makes it clear that a number of factors contributed to inadvertently targeting a position near Dayr az Zawr, on 18 September occupied by Syrian Army or militia forces. For some reason intelligence reporting incorrectly identified the position as occupied by so-called Islamic State fighters“.

Denmark and Belgium, as well as France, The Netherlands and United Kingdom are the only European countries engaged in airstrikes operations in Syria and Iraq in the so called “coalition against ISIS“. Denmark’s first airstrikes in Syria took place last August 5, 2016.

It is the first time that a European country has decided to suspend its engagement in this kind of military operation. However, it is not the first time that airstrikes in Syria and Iraq have been suspended by a State: On February 22, 2016, Canada officially suspended all operations consisting of bombing targets in Iraq and Syria, ending a controversial action inherited from Prime Minister Harper administration.

DANISH INVOLVEMENT IN THE COALITION AGAINST ISIS

In this report by Airwars from October 2015, Denmark initially asked for Danish operations to not be reported in press releases: “Colonel Andersen confirmed that the Danish military had asked CENTCOM not to identify Danish actions in its press releases, though argued that the introduction of the ‘partner nation’ term was a result of “several interests that had to be united” rather than a Danish request exclusively. A FOIA request by Danish reporter Charlotte Aagaard later confirmed the Danish policy of rendering it impossible to identify Denmark’s role in strikes, “neither directly or through deduction”, specifying that “the Danish contribution should not be mentioned in Coalition press releases if fewer than three nations are mentioned in relation to the activity in question.” Under pressure from Danish media, mission updates were initially expanded in November to include the names of provinces and cities targeted – although dates and locations of attacks were still withheld.”

In this other report on The Netherlands transparency on airstrikes, it can be read that Dutch extreme discretion has suffered indiscretions twice: “On only two occasions have the locations and dates of Dutch airstrikes in Iraq been revealed – on neither occasion by the Netherlands itself. Following a strike on Fallujah on July 25th 2015, France later reported it had carried out the mission with Dutch assistance: “Cette mission fut réalisée conjointement avec des avions américains et hollandais.” And in September 2015, Airwars in collaboration with RTL Netherlands was able to show that according to a declassified CENTCOM document, Dutch aircraft had been implicated in a possible civilian casualty incident ten months earlier”

In this report or Airwars.org, entitled “Cause For Concern Hundreds of civilian non-combatants credibly reported killed in first year of Coalition airstrikes against Islamic State”, we read concerning Denmark’s information on civil casualties in Iraq: “In a written response to questions from parliament’s Defence Committee, the then Defence Minister Nicolai Wammen suggested that in the case of civilian deaths or injuries from Danish strikes, affected family members could seek redress in Denmark’s courts: ‘Compensation lawsuits [in relation to the Danish contribution to the war on ISIL] can be filed at the Danish courts in accordance with The Danish Administration of Justice Act.’ Wammen also confirmed that no agreement had been made between the Danish and Iraqi governments to ensure compensation for civilians killed by Danish air strikes. When asked what options were open to relatives of civilian victims in seeking to clarify whether an attack had been carried out by Denmark, Wammen responded that ‘relatives can contact the Iraqi authorities, a Danish authority or the Coalition.’

Recommendation: That Denmark adopts Canada’s best-practice, reporting regularly on where, when, and with what assets it carries out airstrikes in Iraq.

Danish response: Did not reply to queries from Airwars” (p.30)

It must be noted that information provided officially by members of the so-called “coalition” is not necessarily very clear, and numbers differ from one official source to another one, but data base and reports elaborated by Airwars.org allow for a better idea of the logic behind airstrike campaigns launched by the so-called “coalition against ISIS“. 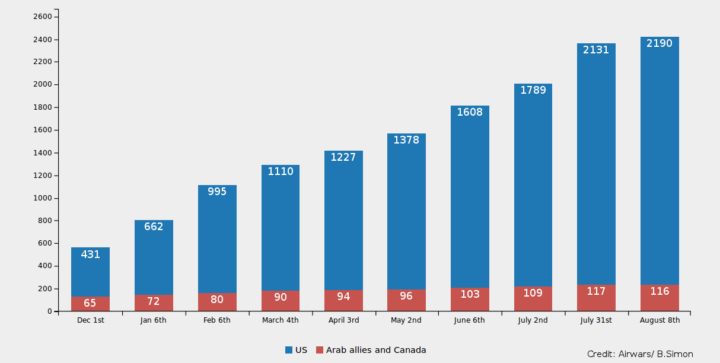 Graphic on airstrikes in Syria launched by United States (blue) and “Arab allies and Canada” (in red) from December 2014 to August 2015, published in a report of Airwars.org entitled: “First year of Coalition airstrikes helped stall Islamic State – but at a cost “

An updated chart shows that as of November 27, 2016, 5673 airstrikes in Syria had been launched by The USA, and 306 by Canada, Australia, France, UK, Saudi Arabia, The UAE, Jordan, Bahrain and Turkey (see Chart “Cumulative US and allied airstrikes in Syria” available here).