During the World Congress of the International Peace Bureau in Berlin between September 30th and October 3rd, a workshop on the Universal Basic Income (UBI) took place. The workshop was coordinated by Juana Perez and Angel Bravo, from the Spanish organization Humanists for a UBI, and Diana Aman and Ralph Boes from the German Organization Bürgerinitiative bedingungnsloses Grundeinkommen that just turned 10 years old.

Angel Bravo began framing the UBI in the context of economic violence experienced daily. The UBI must be unconditional, individual and sufficient.

Then Diana Aman took the floor, indicating that work must be separated from income, whereas today they are closely connected. The UBI proposes an income based on the fact of being alive, without having to pass any exams or meet any conditions. Furthermore, it should be large enough not to force people to work. If the basic income is small, employers may want to pay less, arguing that people already get money.

Thomas More in his book “Utopia” noticed that poverty was associated with crime, regardless of the severity of the penalty. He wondered why there was so much crime if there was a death penalty for theft, and observed that many people were forced to steal to survive. These ideas are still valid today, although the situation is not exactly the same. There are people in Germany who receive subsidies for poverty but who do not have enough for transportation.

Another historical reference is Thomas Paine, one of the founding fathers of the USA. In the late eighteenth century he proposed the idea that any person who owned land should pay a tax in proportion to the size of their property, and those without property should receive a payment for the land that they did not possess but that they should have. For Paine land was a Common Good.

Then Ralph Boes gave further information on the separation between work and income. If I’m on the subway and someone is begging, that person is working but gets very little money; the same happens with children who go to school. With technological development there will be fewer and fewer jobs, but the world is not ready for mass unemployment. Therefore the relationship between work and income must be broken. The problems are getting bigger, while our politicians have a very short vision.

Some examples of how the UBI could contribute to peace:

In Greece there are millions of people unemployed. During the crisis we gave money to the banks in Greece, but did nothing for the people. If people had received that money there would have been no banking crisis, because people would have had money to pay their debts, and they could have lived without misery. Now there is misery and resentment.

The people of Iraq and Syria are fleeing to Europe. They aren’t coming because they like Germany, but because they cannot live in their own countries. Therefore, if we tell them they can stay in Germany it will not solve their main problem either. If, instead of throwing bombs, we help these countries to implement the UBI, people could return to their countries, and it would be much cheaper. Thus, if someone wanted to come to Germany, they would come because they wanted to, not because they were forced to. In Iraq, after the fall of Hussein, the former military were left without income. So, many of them joined ISIS.

Finally Juana Perez explained why the UBI would be a step towards peace and nonviolence.

The UBI is part of a humanist vision as it puts the human being at the centre, whereas the current system puts money in the centre.

One thing is a job for payment, and another thing is the work that someone does, whether paid or not. Employment is not what gives us dignity, we are worthy by the mere fact of being human. We do not agree with the biblical curse that says “By the sweat of your face you shall eat bread“. This curse has been used to justify the present violent system. It is the root of our culture, and is at the origin of wars and other forms of violence that we experience daily.

When talking about giving money to people for “doing nothing”, we are touching the root of the system in which we live, and so much resistance is felt not only among sectors of economic power, but also in our own heads.

We also need to review the concept of “wealth”, including not only tangible but also intangible wealth: wealth is the result of the work of thousands of generations throughout history; therefore, wealth is for all mankind.

According to experts, today there is wealth for up to 12 billion people to live in dignity. So, it is not a lack of resources but social injustice and unequal income distribution which prevents it.

Technological advances are eliminating jobs; some experts say that in 2 or 3 decades more than 50% of current jobs will disappear. For some this is a tragedy, for us it is an opportunity to free ourselves and invest our energies in what we think is most important.

All these data indicate that we are now at a crossroads: either we continue as usual – a global economic dictatorship capable of returning us to the stages of semi-slavery or slavery we thought we had surpassed – or we take a rarely-known historical leap, putting the human being as tbe central value and concern.

We have all the material means to go the second way, which would free us from the biblical curse that is the basis of this inhuman system.

Today another future is possible, if we give priority to people with progressive disarmament and a culture of peace and nonviolence, so as to give us free energy for what we believe makes us free and happy.

Each of us must choose at this juncture; we are all responsible for the future that awaits us.

In order to walk toward this new, more just and nonviolent paradigm, let’s begin to reclaim the UBI. The financial and material means exist; only mobilized people and brave politicians are scarce.

The workshop ended with an exchange between attendees and speakers.

Translation from the Spanish by Leopoldo Salmaso 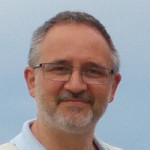