At the IPB Disarmament Congress in Berlin this weekend around 40 young people from 15 different nations met during a Youth Gathering. Pressenza interviewed three of them: Marie Cucurella from France, Emma Pritchard from England and Simon Ott from Germany.

Mostly European countries were represented but also youths from USA, South Korea, Argentina, Colombia, Japan, India, Australia etc., came. Only the African invitees did not make it – as usual because of difficulties to get visas. Almost all of the young people have either an activist or an academic background in the issues of peace and nonviolence, e.g. Marie and Simon are members of Women’s International League for Peace and Freedom (WILPF) and Emma holds a master in conflict resolution.

The structure of the encounter, mostly organised by the Youths themselves, was very different to the rest of the congress. While the regular congress consisted mainly of plenaries and panel discussions, the youths, before and at the end of each day, organised games – “non-formal education activities” – to get to know each other, including a conversation café or team building activities. “Many of these games I learned from conflict resolution studies”, says Emma who was one of the organisers, “for example one game where you give a series of statements, like ‘I am a feminist’ and people have to position themselves in a line between yes and no and explain their position.”

Gender issues and ways of communication

What all three emphasized as the most importantthing in the Youth Gathering were the inspiring talks with each other. “We talk about many themes: feminism, peace education, capitalism, and many more”, says Marie, and Simon continues: “There are very different inputs, we learn a lot from each other.” Important also and different to what they observe in the formal meetings of the Congress: everyone was included, also shy people found space to express their views. Marie says: “For example, we would ask: ‘Luisa, what do you think?’ or we work in smaller groups where it is easier for everyone to talk.” “We do not agree on everything but we have a way to respect each other”, Simon adds.

One hot topic was the gender issue. “All these old men”, Marie sighs and elaborates: “When you look at the lower levels in the hierarchy, you have more women, but when you look at the podiums and the higher positions, men are still greatly outnumbering women.” But they realized in their generation gender inequalities still persist. ”You wonder if it is a structural problem or something else that is hindering.” They found out that in part the position of men derived from trained behavioural patterns. “Boys are more used to interrupt, while girls are often calmer”, says Emma, by way of example.

They always say: Engage the Youths!

When asked to constructively criticize the Congress, all three of them become rather lively: “They always say: Engage the Youths! But then they do not give us space. The presentation of the Youth Gathering and our work has been given ten minutes in the panel, and there were no other young speakers in the plenary. They don’t ask our opinion, they do not engage us.” Emma says that the Youth had an important perspective to contribute, a perspective that is also valuable. “The goal would be that we no longer have Youth Gatherings in the future but that we participate on equal terms”, Marie says. Also, the structure of the Congress was not very much appreciated. “It is so conservative, very traditional: the audience only passively listening to some celebrities. Maybe they like it this way. But it is not attractive for young people. It is not the way to make conferences nowadays.” They could do many more workshops with open discussion rounds, less plenary sessions, everything more creative and active and fluent, they explain. And then: “People want to know what they can do. You must engage them to become active.”

How would Aliens be treated by Humans?

And now? “We will stay in contact.” The draft of the draft of the draft of their declaration (here you can find the second draft) is, after many debates, now ready to be finalized. Another goal is the organisation of a World Youth Congress for Peace in 2018. Also the organisation of workshops and webinaries is planned. However, it seems that this is just the beginning. They got to know each other, and they struggled together to find ways to talk, debate and define the most important issues. But talking with them you could feel how inspired and enthusiastic they are. At the end they told me, laughing: “Last night we talked about how Aliens would be treated by humans. Some of us were optimistic others more negative.” To bring it more to the serious side, Simon explains: “Basically it is the question of what would happen if a neutral power would appear. How would humankind, as it is today, respond?” “Of course”, Marie adds, ”we assumed that the Aliens would be peaceful.” 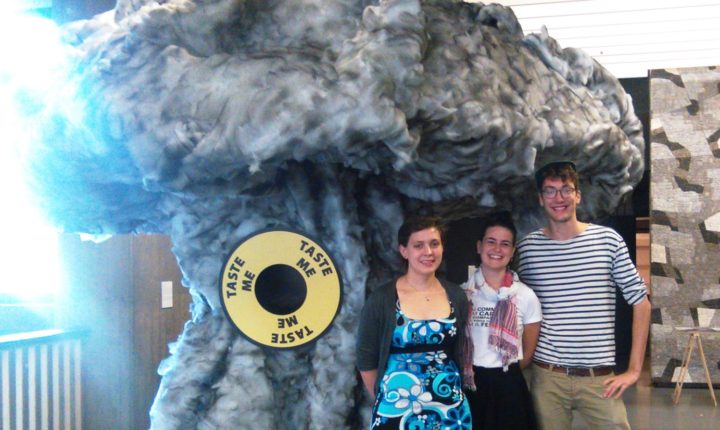 Emma Pritchard, Marie Cucurella and Simon Ott in front of an Atomic bomb sculpture exhibited at the conference.

Asked for the value that is most precious to them, Marie answered: “Solidarity and Respect.” Emma: “Justice. Not so much legal justice, but equality, the concept of sharing, of dialogue.” Simon: “Collaboration. Also justice. Equal access to resources and equal rights. Sharing.” The summary for all of them: “Every time you meet people from somewhere else, you realize: they are just like me.” [in my interviews I always ask my interview partners about the values that count most for them, Note by the author]