“It is imperative that there be prior, free, and informed consultation of indigenous peoples concerning any project that could affect their rights”.

August 7, 2015, Washington, D.C. – On the International Day of the World’s Indigenous Peoples, celebrated August 9, the Inter-American Commission on Human Rights (IACHR) urges the Member States to effectively guarantee the right of indigenous peoples to live in their ancestral territory and to be able to carry out their traditional subsistence activities and preserve their cultural identity.

The Inter-American Commission underscores that the lands traditionally used and occupied by indigenous peoples are critical to their physical, cultural, and spiritual vitality. Therefore, the relationship indigenous communities have with the land is not merely a matter of “possession” and “production,” but an element of significant material and spiritual meaning which they must be able to fully enjoy, even to preserve their cultural legacy and pass it along to future generations.

In this regard, the IACHR expresses its concern over the development of corporate and industrial activities in the region that may have a negative impact on indigenous peoples’ exercise of their human rights. The IACHR has received information concerning violations of their right to access to information and their right to free, prior, and informed consultation and consent, and concerning violations to the right to citizen participation in the development of these projects. The IACHR has even received troubling information concerning situations in which entire communities are forced to move because their territories have been occupied or because of the impact on vital natural resources, such as streams of water, aquifers, or lands used for subsistence activities.

“It is imperative that there be prior, free, and informed consultation of indigenous peoples concerning any project that could affect their rights,” indicated the IACHR President and Rapporteur on the Rights of Indigenous Peoples, Commissioner Rose Marie Antoine. “Indigenous peoples must participate in the decision-making to be able to effectively exercise their right to communal property and cultural identity. It is essential for the OAS Member States to urgently implement the necessary measures so that all projects are implemented with the consent of the communities and indigenous peoples affected.” 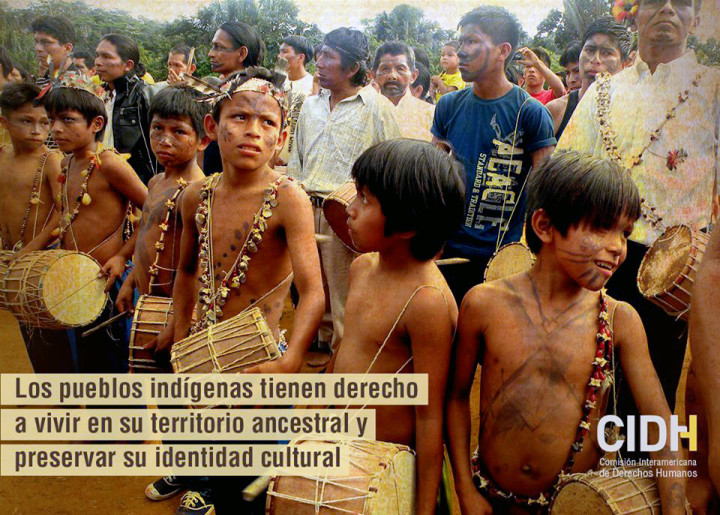 The IACHR also urges the Member States to obtain the free and informed consent of indigenous peoples, which should be done prior to the tendering and execution of any plans or projects that may affect their rights over their ancestral territories and the natural resources found therein.

“Corporate and industrial projects that contribute to countries’ economic development are a critical element of making progress against poverty and ensuring the economic, social, and cultural rights of the population,” said Commissioner Paulo Vannuchi, who is in charge of the IACHR Unit on Economic, Social, and Cultural Rights. “However, these projects must always be developed with strict and total respect for the human rights of the indigenous peoples affected by such undertakings. The projects undertaken by the extractive, forestry, hydroelectric, mining, and food industries, among others, should be developed for the benefit of the populations and should not harm them. To achieve this, States must ensure that they comply with the requirement for prior, free, and informed consultation to obtain their consent,” he added.

The Inter-American Commission has also received information concerning alleged acts of violence perpetrated against indigenous peoples, especially against individuals who take on leadership roles in opposition to these projects. This includes killings, physical attacks, sexual violence, and destruction of homes. In some cases, according to the information received, some of these acts were perpetrated by members of State security forces, while in other cases the perpetrators were said to be individuals contracted by the corporations and industries involved. According to the information received, the authorities in some cases have not adopted adequate measures to respond to attacks and acts of aggression against indigenous peoples and their leaders, perpetrated on the part of private security guards or security employees of some of the companies in charge of extractive, development or investment projects.

Furthermore, the Commission has received information regarding the excessive use of force in operations carried out by State security forces to disperse demonstrations and protests against these types of projects that affect indigenous peoples. In this regard, the IACHR once again states emphatically that the break-up of a demonstration must be warranted by the duty to protect people, and the measures used must be those that are the safest and the least harmful to the demonstrators. The use of force at public demonstrations must be the exception, not the rule, and must be under strictly necessary circumstances, in keeping with internationally recognized principles.

The IACHR is an autonomous organ of the OAS, and derives its mandate from the OAS Charter and the American Convention on Human Rights. The Inter-American Commission has a mandate to promote the observance of human rights in the region and acts as a consultative body to the OAS in this matter. The Commission is composed of seven independent members who are elected by the General Assembly of the OAS in a personal capacity and do not represent their countries of origin or residence.