When I reach the point of putting pen to paper, i.e. to give shape to a point of view about something relevant, other events happen to occupy everyone’s attention. So today I’m going to get ahead of the game, going to the other extreme with an identical sense of bad timing.

So, I predict that in the not too distant future, an era of collaboration between cultures will start. But how? Hasn’t Samuel Huntington sufficiently clarified us to the contrary in his article and subsequent book, “Clash of Civilisations”? Isn’t it obvious that a long list of conflicts is developing today along what he called “the fault line between civilisations”?

However, as usual, things aren’t always what they seem.

Let’s look closely. On first reading, several confrontations seem to be down to inter-religious reasons. Mohammedans are being persecuted by Buddhists in Myanmar and the Christian government in the Philippines. Criminal gangs are fighting to impose their Islamist claims in Somalia, Mali, Niger, Nigeria, Libya and other points of Northern Africa. Copts are being attacked in Egypt, tensions continue between India and Pakistan, and radical Uighurs have killed several young Chinese in a train station, in reprisal for the oppression of the Islamic faith minority at the hands of the central government. Another government, this time Jewish, has ordered its military to rain death on a corralled Palestinian, also Mohammedan, people in Gaza: the same death that the drones and soldiers of the Anglo-Saxon Christian culture have utilised in new crusades in Iraq, Afghanistan, Libya and Syria.

But also several conflicts of different intensity have emerged in parallel between diverse interpretations of a same confession. In the Middle East and the Arabian Peninsula, Salafist Sunnis and Shiites have unleashed a bloody struggle for intra-Islamic domination. With less physical violence than in yesteryear, but with equal fanatical ardour, protestant and catholic legions fight for the domination of souls in vast parts of America and Africa.

Another kind of dialectic is sustained between different ethnic groups, such as in some points of Africa and Asia or between nationalities who feel alienated from their centres of power such as in Catalonia, Scotland and the Basque country.

Any analyst must concede that all of this cannot be considered a “clash of civilisations” and that the multiplicity and details point much further to an expression of instability of structures devoid of human relationship.

But even this look is insufficient, as it gives too much consideration to conflicts, thereby hiding other phenomena.

So we understand that what the late Harvard Professor and adviser to the White House National Security Council was doing with his theory, wasn’t “predicting” but rather “producing” realities. Conscious of this, his look projected scenarios so that a certain scheme of domination could focus on objectives and justifications, in addition to provoking factionalism in order to undermine any spirit of sovereignty or cooperation.

In reality, Huntington recreated his motives from the historiological concepts of Spengler and Toynbee who were born in the ideological environment of biological determinism and Pavlovian conditioning that were very influential in their day.

Certainly we are witnessing the birth of a unique civilisation, the first planetary civilisation in history. But we mustn’t believe, following dialectic lines, that the only way in which the relationship between different entities will develop is through conflict. This is the basic error which you fall into from a dialectic analysis; a relative of Heraclitus’ Polemos.

The surpassing of a phenomenon comes from the state of relationship with others; a relationship that can sometimes be one of opposition, but on others can be a genuine complementation, a stage prior to the arrival of a synthesis.

In this way – much to the chagrin of Mr Samuel – we can see how, even on the side of the reprobates: the protagonists or financiers of wars based on similar interests, pacts emerge between different cultures, religions and civilisations. Such is the case of the Saudis-Qataris, Israelis and Americans-Brits.

But much more interesting to observe are the more evolutionary alliances that are starting to appear. In this case, it is significant to see the emergence of a counter weight to a pretended cultural hegemony which is precisely representative of the multiplicity of civilisations. The block made of Brazil, Russia, India, China and South Africa whose acronym, BRICS, is already in common usage, manifestly shows how nations with essentially diverse traditions of civilisations are starting to cooperate and generate a common world image; an image to which it seems that other peoples from other cultures are starting to adhere to.

The torrent of pluri-culturality offered to this same world seen in the progressive recognition in Latin America of its own and its African roots and their influence on their mixed-race majority is also significant. Here a servile worship of the domineer is giving way to a renewed search for an identity inclusive of others, a haughty convergence but not a vindictive one.

A powerful multicultural and ethnic co-existence that was installed in Europe is also significant, even if old individual and collective landscapes still resist.

And what about the USA, motherland of the wise Professor, place in which, according to the Census Bureau, the number of interracial marriages has grown without interruption from 310,000 in 1970 to 651,000 in 1980, 964,000 in 1990, 1,464,000 in 2000 and 2,340,000 in 2008, reaching approximately 15% of new marriages? Beyond the details of demographic definitions (Hispanics and Europeans are classified as “white”) and conceptual imprecisions (race is not equivalent to culture or civilisation), isn’t the fact that there are increasing numbers of people who share their most intimate dreams with people from different cultural backgrounds suggestive?

So the lines that would seem to divide cultures, that from a certain regard could constitute sources of conflict, are being swept away by a higher intention. Just as the old world persists in the historical and social memory, a new horizon is dawning as a future image in the human consciousness, making itself present. This is not foresight or prophecy. It is happening. The Universal Human Nation is already being built.

As I said before, I’m always too late. 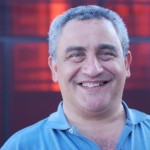