My presentation is focused on Brazil, especially in the protests of June 2013. Millions of people took to the streets in hundreds of cities. It started with 20 cents. This was the amount of the increase in public transport fares for bus and metro in the city of São Paulo.

A small group known as MPL – Free Ticket Movement, for its initials in Portuguese, carried out ​​a demonstration, as they always had done when fares were  been increased over the last 8 years. Usually demonstrations of MPL gathered together between 500 and 2,000 people in the streets to protest against the increase and claim zero rate. They are peaceful protests. However, there is always a small group of hotheads smashing windows and burning dumpsters. The protests seek to stop traffic on any route of wide circulation in the busiest times. They are repressed by the police, which in Brazil is a military police.

But in this year 2013 something new happened. Police repression was even more violent than usual with the heavy use of “non-lethal” weapons, rubber bullets, tear gas, etc. The so-called mainstream media positioned themselves at the outset of the protests against them and in favour of repression. Scenes continually exhibited violent actions of the police and the actions of the small group trying to break a window or burn a bin. The newspapers wrote editorials calling for an end to the demonstrations. clearly trying to instil fear in the viewers/readers highlighting scenes of violence.

The social media showed the other side of the demonstrations: youngsters injured by rubber bullets, arbitrary arrests by the police, the extremely violent police action on youths, adults and elders who were simply exercising their right to demonstrate. The demonstrations were happening not just once but several times, convened by social networks and in solidarity with those who had been repressed in the previous demonstrations.

Each demonstration was brutally suppressed by the police. People, instead of staying home in fear of police repression, decided to return to the streets. The call for demonstrations became known as #VEMPRARUA. And the following photos show what happened in hundreds of cities across Brazil. 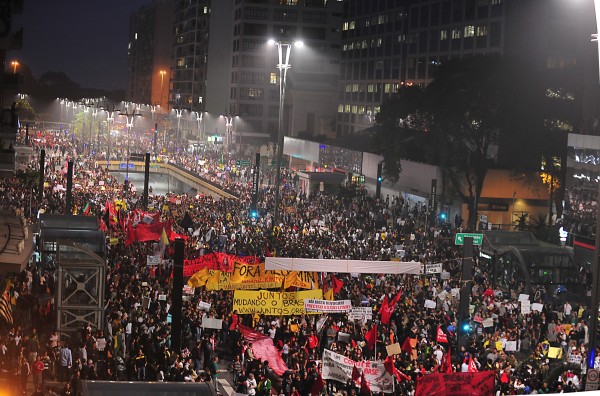 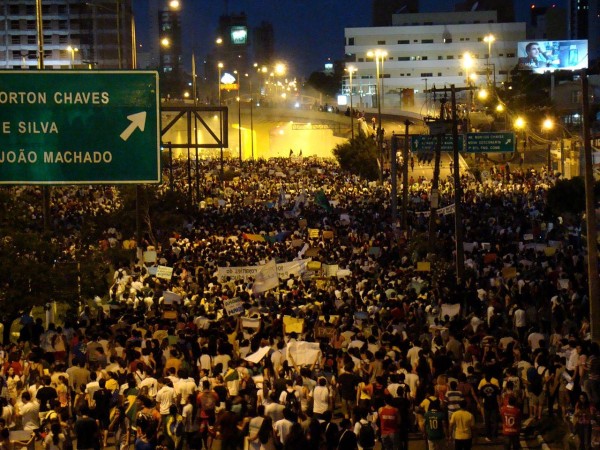 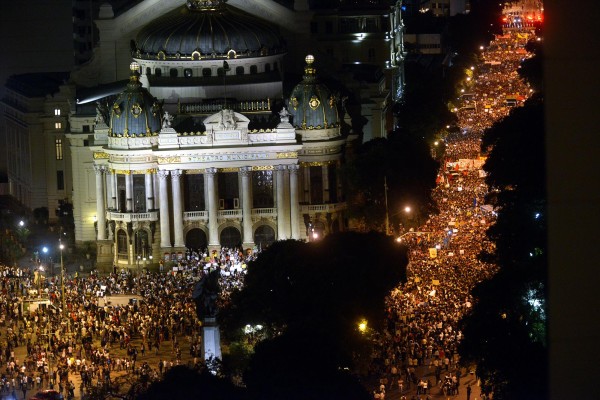 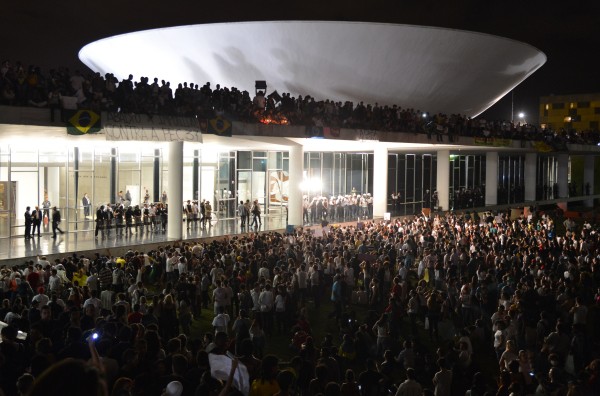 People’s reaction to the call of the mainstream media

These mass demonstrations were totally non-violent. And people began to realize the role that mainstream media played during the demonstrations, and throughout history, such as when supported dictatorships that ruled Brazil in the 60s to 80s. The first 30 seconds of the video below shows the “Welcome to the media”

VIDEO “WELCOME TO THE BIG MEDIA”

Journalist prevented from working on the phone, maybe telling his boss: – What do I do now? He ended up retreating.

In this other video, we have the largest Brazilian television network, one of the largest in the world being forced to hide their logo! One of the main symbols of a communication medium, especially a TV that works with images, the logo had to be hidden to be allowed into the demonstrations.

VIDEO “WHERE IS THE LOGO? (The largest TV network in the country!)”

Finally, this last video is an example of what the mainstream media had to do:  to back demonstrations and support them to keep their audience. The largest newspaper in the country made ​​a very moving video supporting the demonstrations, five days after it wrote a scathing editorial against them, as shown at the end of the video.

VIDEO “switching sides” (the largest newspaper in the country is forced to deny its own publishing!)

What about the role of new media?

Before continuing, let’s look at some data from the latest research on the use of the Internet in Brazil, conducted between September 2013 and February 2014:

– 52.9 million use the Internet on mobile

Of all the time spent on the Internet on mobile:

Social media is very popular in Brazil. We are a culture that likes to move as a group, we like to communicate. Social media were widely used to disseminate photos and videos of the events that the mainstream media did not show. It widely denounced the violent police repression. It shared testimonies of those who were at the rally. It reported all demonstrations; many initiatives arose from the common people.

Many groups, called “collectives” were created. The people gathered to record the events, posting and sharing. Many groups on Facebook, Twitter hashtags, blogs, pages, were created to demonstrate. Even nicknames were used as a form of protest. In the same year, for example, a village of Indigenous people called Guarani Kayowáa published a letter in which they stated that they would commit mass suicide if they were removed from their lands. The letter caused a stir and people used this name, for example, a friend called Wagner Oliveira changed his name to Wagner Oliveira Kaiowáa Guarani.

There were many forms of expression, not a single issue, many shapes, different topics, beyond the issue of transport fares, demanding human rights for all.

Finally, the government had to back down from the 20-cent increase in transport.

Given all this, we can ask: What do new media support? What are the so called mainstream media trying to hide? Is there something new in people trying to express itself in the world?

In our opinion, there is a New Human Sensibility expressed especially in young people, and it has these features:

Compassion: Solidarity with the struggle of others, for example, the Guarani Indians Kayowáa, the poor who disappeared at the hands of the police, “Amarildos” etc..

Dissatisfaction/Tension: Given the current situation, despite recent social progress it is clear that we are very far from having basic rights.

Rejecting the established: people do not feel represented by politicians or by the media. “they do not represent me.”

Horizontality: leaderless protests and demonstrations, not wanting or needing leaderships.

Diversity in the themes of the protests and in the forms of protesting (e.g. vigils by teachers, peripheral occupations)

Making media, Being means: produce various media as well as traditional media (and their websites), using own name (or nickname) to protest, making an album, getting together with colleagues and creating groups, seeking financing horizontally, creating websites, groups, blogs.

Yes, there is a new sensibility that acts against the status quo!

And Silo, our guide, mentor of the Pressenza Agency and founder of the Humanist Movement in which we participate said, the new sensibility is building something new, a Universal Human Nation in which the human being is the central value.

Paulo Genovese
Pressenza editor in Portuguese. Member of the Humanist Movement and the Centre of Studies of the Park of Study and Reflection, Caucaia, Brazil