With large projects held back by the economic crisis and lack of infrastructure, Argentina seems to see an alternative path towards greater sustainability of its energy matrix in small renewable energy ventures, promoted by industries, businesses and private users sensitive to environmental issues.

These are initiatives to cover their own consumption, sometimes with the addition of the so-called distributed generation, in which user-generators who have a surplus of electricity can inject it into the national electricity system and thus generate a tariff credit.

Distributed generation initiatives have just surpassed 1,000 projects already in operation, according to the latest official data.

At the same time, this month saw the inauguration of the largest private solar energy park in the city of Buenos Aires, an initiative of the Argentine Rural Society (SRA), the traditional business chamber of agricultural producers.

The park was installed in the exhibition center it owns in the capital of this South American country, to supply part of its consumption with an investment of almost one million dollars and more than 1,000 solar panels.

“Small private renewable energy projects and distributed generation will be the ones to increase installed capacity in the coming years, because the electricity transmission and distribution system sets strong limits for large-scale projects,” Mariela Beljansky, a specialist in energy and climate change issues, told IPS.

Beljansky, who was national director of Electricity Generation until early 2022, added: “Otherwise there will be no way to meet the growth targets for renewable sources set by Argentina, as part of its climate change mitigation commitments under the Paris Agreement.”

Argentina presented in November, at the 27th Conference of the Parties (COP27) on climate change of the United Nations, in the Egyptian city of Sharm El Sheikh, its National Climate Change Adaptation and Mitigation Plan, which includes 250 measures to be implemented until 2030.

The National Secretariat for Climate Change estimated the total value of the implementation of the plan at 185 526 million dollars, four times more than the debt that Argentina contracted in 2018 with the International Monetary Fund (IMF), which has generated a sharp deterioration of the economy since then.

According to the data included in the plan, the energy sector is the largest generator of greenhouse gases (GHG) in the country, generating 51 % of emissions.

Although renewable sources (with wind projects in first place and solar in second place) reached a record in October, supplying 17.8% of total electricity demand, the energy matrix continues to be sustained basically by oil, natural gas and large hydroelectric projects.

Furthermore, the country has not decided to stop the development of fossil fuels. The main reason is that it has large reserves of shale natural gas in the Vaca Muerta field in the south of the country, which have been attracting the interest of international investors for years. The climate change plan sets the goal of using natural gas as a transition fuel to replace oil to the greatest extent possible.

The plan also includes goals to develop a variety of renewable energy sources (wind, solar, small hydro, biogas and biomass) as well as distributed generation, “directly at the point of consumption” and connected to the public grid, at residential and commercial levels.

Large renewable projects experienced a great growth between 2016 and 2019, from an official plan that guaranteed the purchase of electricity at attractive prices for investors, but since then there are practically no new initiatives. 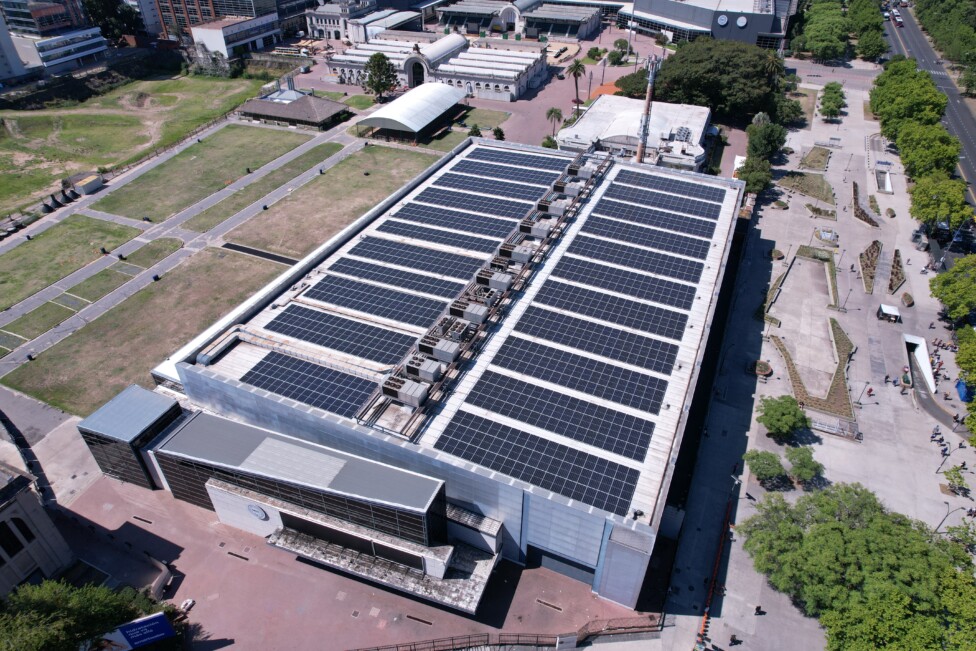 Aerial view of the 5,000-square-meter rooftop filled with solar panels, in one of the pavilions of La Rural, the usually busiest trade fair and exhibition center in Buenos Aires. It is the largest private solar park in the capital of Argentina and required an investment of almost one million dollars. Photo: Courtesy of La Rural Consumption subsidies

“In the current situation in Argentina, where there is practically no financing, restrictions on importing equipment, high inflation and economic uncertainty, it is difficult to think of large renewable energy parks and small projects become more attractive,” Marcelo Alvarez, a member of the board of the Argentine Chamber of Renewable Energy (Cader), told IPS.

Alvarez said that what conspires against small private and distributed generation projects are the subsidies that the Argentine government has been providing for years to energy consumption, including those families with high purchasing power who do not need them.

“Artificially cheap electricity tariffs and the scarcity of credit discourage the growth of renewables,” Alvarez said.

“The proof of this is that more than half of the distributed generation projects in operation are in the province of Cordoba (in the center of the country), where electricity prices are three times more expensive than in Buenos Aires and there is a special line of credit from the local bank (Bancor, which grants “eco-sustainable loans”) for renewable equipment,” he explained.

In fact, according to data from the Secretariat of Energy, there are 1051 user enterprises that generate their own electricity and inject their surplus into the grid and 573 of them are in the province of Córdoba, in the center of the country.

Argentine state energy subsidies reached US$11 billion in 2021 and this year, up to October, they already exceeded US$7 billion, according to data from the Argentine Association of Budget and Public Financial Administration (Asap).

As for financing sources, there is a credit line endowed with US$160 million from the Inter-American Development Bank (IDB) and the Banco de Inversión y Comercio Exterior (Bice), partly financed by the Green Climate Fund, which is oriented to renewable sources and energy efficiency projects for small and medium-sized companies. However, most companies are unaware of its existence. 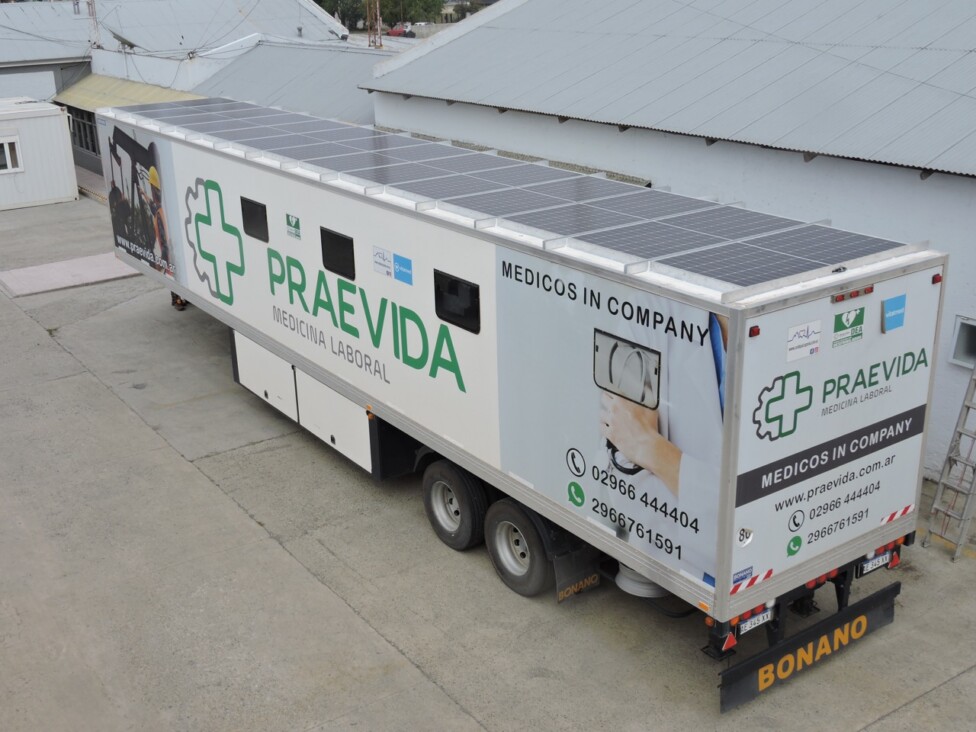 A truck that functions as a health center and travels through towns in Patagonia, in southern Argentina. The roof of the vehicle is covered with solar panels that provide electricity for the four mobile clinics and diagnostic imaging equipment. Photo: Courtesy of Utorak Private ventures

On December 15, the Rural Society inaugurated the largest private solar park in Buenos Aires, in the 42,000 square meter covered area where the country’s most important fairs and exhibitions are held. The investment reportedly amounted to almost one million dollars.

“We have 42 000 square meters of roofs in our pavilions. It is a very important flat surface for the placement of solar panels, which is why we had been coming for several years with the idea. We had done a pilot project in 2019, but then everything was delayed because of the pandemic, which forced us to close the venue,” Claudio Dowdall, general manager of La Rural, told IPS.

“At this stage we used 5,000 square meters of roofs, on which we placed 1,136 photovoltaic panels, totaling a power of 619 kilowatts. It is the equivalent to the average consumption of 210 family homes and, for us, it is between 30 and 40% of the electricity we use,” he added.

Andrés Badino, founder of Utorak, a company that has been dedicated to renewable energy for families and companies for more than five years, confirms that consultations and demand are growing in the sector.

“People’s interest has been increasing due to greater environmental consciousness and, also, because of what can be saved on electricity bills for residential users but also for educational institutions and health centers,” said Badino.

“Argentina has domestic industry for the production of solar thermal tanks, but not the manufacture of panels, inverters or batteries, despite the fact that the country has one of the largest reserves in the world, the main component. But we are confident that international prices will go down and stimulate demand,” he concluded.