In France, more than one million people demonstrated, according to figures from the Ministry of the Interior. The next meeting is scheduled in the next few days, on Tuesday 31 January 2023.

In Paris, on Thursday 19 January, the demonstration going from “Place de la République” toward “Place de La Nation” rallied around 80,000 people according to the figures of the Ministry of the Interior. The reform of pensions is a very sensitive issue in France and has been postponed many times. From September 2023, the legal age should be raised by one quarter each year to reach 64 years by 2030. 6 out of 10 French people are opposed to it (CSA poll) and consider it unfair.

In the Paris march, very different participants, of all ages and backgrounds, and sometimes with multiple motivations. Among them was Daniel, 59, an ergonomist in an automaker. His job is to design and improve working conditions in companies and ensure accident prevention. With a long career, this reform will have little impact on him. Having started at age 17, he can leave at age 60. If he is here today, it is mainly to support the people on the assembly line he works with every day. “We make sure that people at their workstations are in the best possible condition to work, that they maintain their health capital. So that they work in the best conditions. They are not going to make it to 64.” His wife, 57, a former national educator, is looking for a job and struggling to find one.

A little further on, two retired friends, Jocelyne, a former educator, and Lina, a former childcare assistant, are preparing to join the procession. If they are both outside today, it is not for themselves but for others. “We’ve come to support those who won’t have a pension in a few years. Against this capital that takes everything. We talk about retirement, but there are also those who don’t eat, who have no money, and who sleep outside. This is very important.

Jocelyne continues, “I am also fighting for the youth.” The pensioners of her time fought for labor rights such as the 35-hour week, so it makes sense for her to defend the younger generation. On one of their placards is written in green and black letters: “Retirement is not an allowance, it is a reward for years of contributions. It is a due.”

In the distance, another sign: “Social, fiscal and climate justice”. It is that of Estelle, 27, accompanied by her friend Clémence. They work together for the civil service, in a museum. Like them, the young people, who were very mobilised, came to express their discontent with the government in a general way. An anti-system fed-up. “The vision of society that Macron has is not ours,” says Clémence. On her wooden sign: “Work, consume, die”. 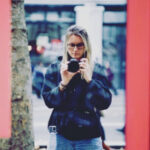