Munich, 25 October 2022. The Science Rebellion continues to escalate the intensity of its actions. 28 members of Debt for Climate and Scientist Rebellion have blockaded the building of the international investment fund BlackRock in Munich. They forced their way into the building and 12 scientists and scientists glued themselves to the ground in its interior. Two other people used artificial oil to represent the deadly consequences of fossil fuel investments for the Global South. Up to 5 vans and 8 police cars arrived shortly afterwards. Some activists are currently being arrested and taken to the police station.

Larry Flint, the CEO of BlackRock, is one of the men who bear the greatest responsibility for the climate and environmental catastrophe that is threatening the whole of humanity. BlackRock is the world’s largest fund manager and no state can control it. Indigenous peoples have been pointing to it for years as the biggest environmental criminal today, failing to meet clear decarbonisation targets recommended by science. “Despite its latest announcement on ‘natural capital’, BlackRock has no concrete policy to manage investments that have an impact on indigenous peoples and our territories,” says Sonia Guajajara, Executive Coordinator of APIB (Association of Indigenous Peoples of Brazil).

Also, in Europe our present and our future are in the hands of BlackRock and voices such as David Wallace Well are upwardly denouncing the criminal “hypocrisy of Larry Fink“.

Esteban Servat, biologist at Climate Debt explains: “There is no plausible way to stay below the 1.5°C global warming target. And politicians know it. We call on the German government to admit climate failure and take immediate action to cancel the appalling debt of the countries that will suffer the most in a world that exceeds 1.5°C, so that these funds can be released for a just transition. These countries are forced to pay debt to the rich countries that have historically contributed the most to causing the climate crisis. With the planet rapidly approaching 1.5°C, debt cancellation is a matter of common sense and climate justice”.

As part of the Unite Against Climate Failure coalition, both groups demand that the German government immediately write to the World Bank and the International Monetary Fund, calling for the cancellation of all financial debt owed by the Global South as 1.5°C+ approaches. They explain that this would greatly facilitate their transition to a more sustainable world, helping to avoid further climate collapse. They also did so in Berlin last week, in an action in which they occupied the Ministry of Finance. 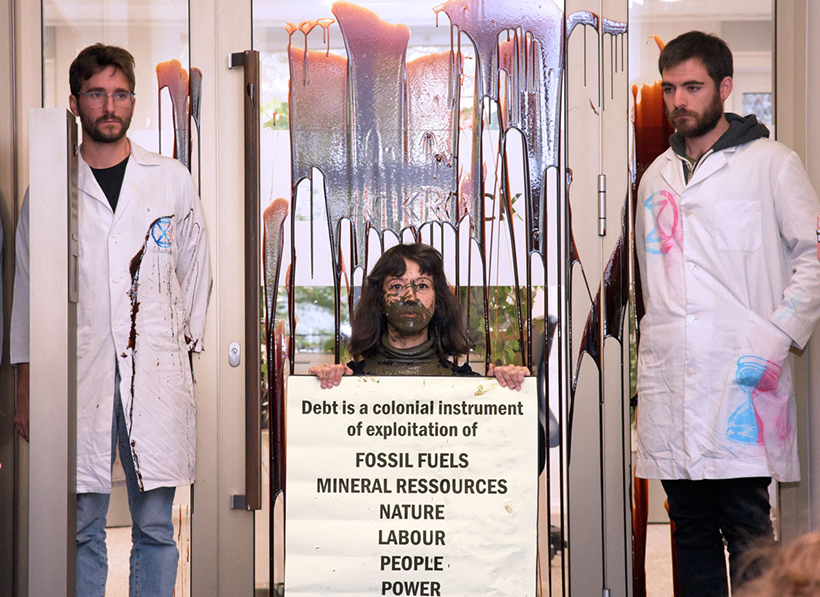 Three of the Spanish activists who took part in the 25/10 action in Munich. Photo by Extinction Rebellion

“I am here because nonviolence has the power to uncover the most uncomfortable truth: unless we rise up, everything we love will be imminently destroyed by our economic system.” – Dr. Mauricio Misquero, PhD in Physics and Mathematics, member of Scientist Rebellion.

Prior to its campaign in Germany, Scientist Rebellion engaged nearly 2,000 scientists, academics and public trust figures on climate change. All were encouraged by Scientist Rebellion to contribute to raising public awareness of the now implausible 1.5°C global warming limit.

As part of this campaign, which involves a series of protests that will last until 4 November, support actions are taking place all over the world. Last Wednesday 19 October in Panama, activists from the group ¡Ya es Ya Ya!, including several scientists, stormed the German embassy. Scientist Rebellion Tanzania took to the streets of Dar es Salaam calling for debt cancellation for the Global South on the 21st, and scientists in Sierra Leone spoke out for politicians to speak out and cancel the debt. In Rwanda, demonstrations and support events took place on the 22nd.

As part of the “Unite Against Climate” coalition, academics in the “Unite Against Climate Failure” coalition set off the fire alarm during the World Health Summit in Berlin. They also pasted up scientific publications on the climate crisis, an act that has become a symbol of the movement. On Monday, they protested together with “Climate Debt” in front of the Ministry of Finance, calling for the cancellation of the debt for the Global South. On Tuesday, together with “Parents against the fossil industry”, they protested in front of the Ministry of Transport to demand a speed limit and the reintroduction of the 9 euro, ticket for public transport.

In addition to Scientist Rebellion and Debt for Climate, partners of the civil resistance campaign, which has been running since mid-October 2022, are Letzte Generation, Extinction Rebellion Berlin, End Fossil Occupy and Jetzt oder Nie – Eltern gegen die Fossilindustrie.