Last Saturday the “First Meeting of Mapuche Women of the Zonal Council of the Mapuche Confederation of Neuquén” took place in the Lof Campo Maripe. Women from different communities met with the intention of creating a space to address different problems that call them in particular and to create a common agenda based on their own and community interests and needs. Al Margen spoke with Lorena Bravo, werken of the Lof to find out more.

Something very valuable that we have learned over the years, and that the most important milestones in history continue to show us, is the power of organisation. Because it unifies, clarifies and sets precedents. The struggle alone is not the same, it doesn’t feel the same. It does not carry the same weight as if it is joint.

This was also the understanding of several Mapuche women from 11 communities living in Neuquén who met for the first-time last Saturday. They did it in xawvn, with a ceremony to present themselves to the territory and ask permission to pu gen and newen to have a good meeting.

The Lof Campo Maripe was the chosen territory. The pu zomo of the Kiñel Mapu Xawvn Ko came to Añelo to meet and discuss on 2 July 2022, within the framework of the Zonal Council of the Mapuche Confederation of that province. “We did it because we saw the needs and the times we live in the territories,” said Lorena Bravo, werken of the host Lof, in a dialogue with Al Margen.

“We decided to create this zomo group and we made our first call. We had great expectations because the topics to be discussed were going to take place there. The idea was to meet up and see what would emerge. We didn’t think that so many women authorities and kona from the pu lof would come. It was a surprise to see all the lamien who came to the place, even with their pichikeche”, she added.

They shared perspectives, experiences and projections in order to get to know each other, listen to each other and organise themselves. Collectively they created an agenda that revolved around the particularities that Mapuche women face, such as health, the creation of spaces for them and their children to enjoy, the strengthening of political and intra- and inter-community links, the multiple roles they play, the violence they suffer and the need for a zonal approach in the development of an internal protocol that allows them to know what to do in such cases.

But the conversations also revolved around the revitalisation of Mapuzugun, strengthening Mapuche identity and education, spiritual and philosophical strengthening, and economics, sustainability of projects and funding. “A common agenda was created according to the needs of each Mapuche woman and the community,” Lorena summarised, adding: “We knew that once we got together, the needs would start to emerge. One lamien was thinking and saying: why do we always have to be thinking about what our Lofches need and why not think about what we need as people? This was something very important that many of them discovered at the meeting”. 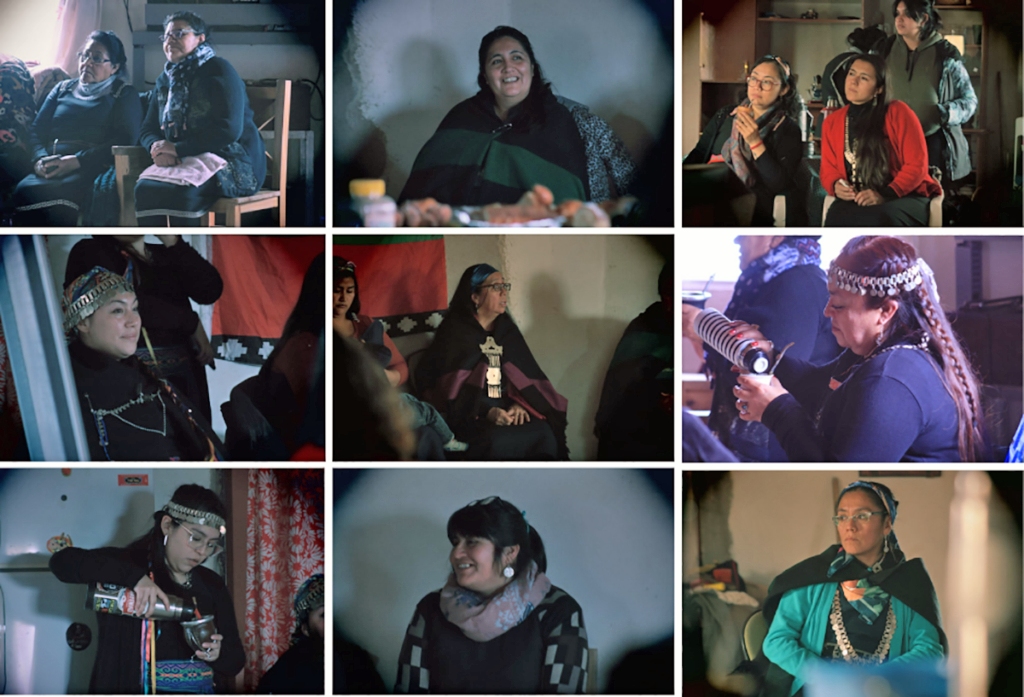 Undoubtedly, this was the first of many to come. They are already thinking about the next one, which will take place on 16 July in Lof Fvta Trayen. As there are many threads that emerged from this first one, they decided to choose some axes with greater interest and urgency that will be deepened in this second moment that will take place in the middle of the month. The cultural strengthening of Mapuche women will be the main theme, and for this they will hold workshops on education and the revitalisation of Mapuzungun during the day.

-Why is it important that these spaces arise?

Because it means understanding that there is a strengthening of Mapuche women that cannot be reversed. It means thinking about ourselves in order to have more political space. Although we are fighting in these spaces and there has been progress in this sense and our participation is noticeable because today, we have agreements for parity to be respected in the roles that were previously played exclusively by men, such as lonkos or werkenes for example, there is still a long way to go. We have broken down barriers but there is still a long way to go.

The meeting ended with great joy after sharing meals and making purrun. They coordinated activities, actions and future meeting spaces that will strengthen their relationships and strengthen them in the Mapuce Kimvn. There is a bigger agenda that brings them together, such as the 2nd Zomo Xawvn of the Mapuche Confederation of Neuquén in November and the 30th anniversary of the reunion of the Mapuche Nation in October. Surely, they will arrive at these dates in a different way.