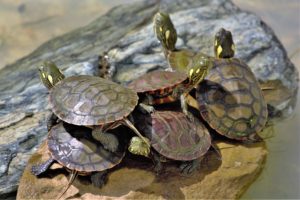 Mornings, as a child, I watch him go down the stairs
The China man, clad in all white, who lives upstairs.
Newspaper in hand, all ready for a day’s work,
But, before anything else, he greets the small turtles
Swimming gaily round and round, in their little green pond.
Hearing his footsteps, clanking on the planks,
They swarm with their mouths open, to greet their benefactor.
Bread crumbs from his pockets, he scatters and throws
Like a father, he watches his offspring, as they gobble and eat.
We wave at each other, he pats me on the head,
I watch him walking down our driveway
And wonder… what sweets are in store
What story would he tell, when he comes home from work. 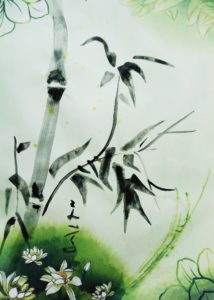 The thick stands of bamboo that dot our garden,
That’s where you would mostly find him and you would wonder why…
Don’t you like the mango, the star apple, the siniguelas trees as well?
And when you ask, his story is always the same.
The trees, thick and lush with fruits, are all very well!
But, the bamboo, though thin and slender, he would say,
Whispers secrets when the wind whistles through its leaves.
And when the storms come, the bamboo simply sways
Remains standing steadfastly, while others are so easily felled. 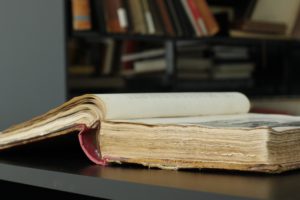 In his room you will find, a vast library of books from China–
Fairy tales and fables, legends and folklore.
A scholar-writer he was, who left the turbulence of China
With stories upon stories to tell.
On his huge desk, he wrote, he scribbled his “Pagoda Views”
Worked on the manuscripts of his books.
Tales of magic, of heroes, of sages, of long ago
He would sit me on his knee, read out aloud and show pictures,
Yes, he filled my head with vivid fantasies and fancy. 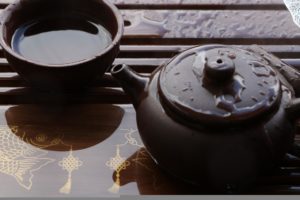 Old battered kettle, black-bottomed from use.
Water boiling furiously. Steam issues from its spout
With a hiss and a sputter.
I watch him— the white-clad Chinaman, who lived upstairs.
Throwing a handful of tea leaves. Oolong tea.
Day after day, Oolong tea steeped in freshly boiled water
In a much-used kettle.
After each hastily eaten bowl of rice and vegetables–
A cup of Oolong tea. Tea, he drinks, scalding hot.
Tea going down his throat, down his esophagus
In a stream of liquid heat, landing in his rounded belly
In a rush, in a torrent.

How heat insensitive his insides must be, by now.
Taking in so much with his burning tea.
He is toughening up his insides, I think,
To soothe away long-lost memories of his past, his daily struggles away.

The white-clad China man is, indeed, Mr. Lim Sian Tek, a scholar-writer who came to the Philippines from the Fookien province of China. He was the editor of a local Chinese newspaper and the author of two books of Folk Tales from China in English, written especially for children and their parents. He held the reputation of having an extensive, authoritative repertoire of Chinese folklore outside of China and, for decades, wrote a weekly column entitled “Pagoda Views” in a leading Manila broadsheet.

Together with his mother and brother, he lived on the second floor of our old house, even before I was born. He was a ‘living presence’ all throughout my childhood and youth. And thanks to him, the China of folklore and legend, the poetry of Chinese writers like Li Po and Tu Fu, came alive.

And, astonishingly, the story of the emperor with “The Kind Heart” is still in use among schoolchildren: https://www.coursehero.com/tutors-problems/English/36494637-Read-the-comic-striptext-below-and-kindly-answer-the-questions/

#1. Turtle: Image by Scottsim from Pixabay

#2. Bamboo: Image by for donat boosty.to/victoria_art_music from Pixabay

#3. Book: Image by Orna from Pixabay

#4: Teapot: Image by Pozhidaeva from Pixabay